Hiyah, dun see the point of writing in my new url when spammers actually bothered to email me to get my address. If you spammers want to spam, please go ahead, I will be ignoring it from now one. Can see just how extremely bo liao some people are; must be a cross between an iguana and a leech.

In case you people are thinking iguanas and leeches are can hardly fit into the description of "bo liao", well, its just a chance to show the immerse amount of animals at my place now.

Alright, my dad is weird, I admit it. Of course, as a kid I have never interacted much with other people's dads (except uncles, none of which I am especially close to) so I thought my dad was normal.

See, the weird thing about him is: HE DOESNT WATCH SOCCER.

He does understand the big deal about it at all. Thats weird isn't it? Ask I grew older I realised MOST guys like football. Even my 80 yr old grandpa watches football while my dad stares uninterested at the TV screen wearing the expression that in his opinion soccer shld last 30 secs. One would find him gazing lovingly at the boring angelfish in the tank five mins later.

Weird. Both fish and soccer joined up makes the most boring thing on earth. Oh wait, I suppose thats either using fish as a soccer ball, or fish playing soccer. Seems to me that combined it is better, hmmm... Soccer is more interesting in the sense that you can at least bet some money on it and win, but fish!

Digressing, I have something against fish. I think they make horrible pets. I have absolutely NO IDEA why some guys my age (peh pehs still understandable) have such a big interest in luo hans.

June's bf, for one, is mesmerised with luo hans. XF's bf too. And the poor dears, coz I heard from June that Benjamin brought her to a luo han exhibition once. Actually, I only have a vague impression he did that, but heck it, I'm sure he is planning one excursion like that soon.

A date to the neighbouring luo han store!

IF ANY GUY DARES TO BRING ME TO A LUO HAN EXHIBITION, I WILL MAKE SURE I SLAP HIM WITH A USED BANQUET STOCKING.

Whats so fun about looking at dumb, greedy and ugly creatures swimming around senselessly? At least get a dog, and he recognises his owners and is nice to hug when you are down. BUT A FISH! What good can it do?

Nowadays I go to people's houses to expecting to see luo hans, and while (usually we will see this scenerio) the father of the place is either cleaning or glazing lovingly at his fish, I feel obligned to go and take look (well the father will give a "Come look at my enormous and colourful luo han" face) and as much as I hate to do it, praise the fish.

There are plenty of people out there more deserving praise than the stupid luo han. I dun feel like giving it to him at all. At least if I told Saddam Hussein (is he still alive?) that he is handsome, maybe he would nod sagely in agreement and stuff 20 rupiahs into my palm. But the luo han! I am sure it is not appreciative of my praise at all.

True, that luo han looks plenty terrific compared to the rest of its species I have seen. Big and colourful. Yet, nobody seems to understand that no matter how colourful and big and convexed its forehead is, it is still a very ugly fish.

I assume that the love for luo hans is because of the media and its bullshit about luo hans having a magical ability to predict 4D numbers. Utter nonsense. I say that if u stared at my middle finger long enough, you would be able to see 4 magic numbers too, but thats because after staring too long you start to hallucinate. Perhaps then, if we hallucinate we will be able to have a glimpse into the future?

I predict that with the economy downfall and everyone's mad scramble to try to strike lottery, we will have the following situations happening:

Husband: *Whistles as he walks into the house*

Wife: Honey, you are home!

Husband: Yes darling, and look what this is!

Wife: Oh. (Tone of voice becomes flat) Another luo han. It is getting ridiculous, George! This is the 67th we have!

Husband, dreamy-eyed: So big, so colourful, the forehead so kok!

Wife: I have to wash the dishes.

Wife: Oh fuck it, George! Look at me please!

Wife: I... *puts a vicious hand into the tank* HAD... *Grabs the new fish* ENOUGH.....! *Violently takes the fish by the tail and slams it repeatedly on the edge of the dinner table*

Husband: Wooh. So angry for what! Have sex have sex lar. Ok ok? Dun angry! *Starts to take off his boxers*

Wife: YOU MEN! YOU ALL NEVER EVER UNDERSTAND! IT IS NOT SEX I WANT, IT IS ATTENTION!

Husband: Huh then what u want me to do? You say want sex then now I give to you liao you still angry for what!

Wife: Sex? No, I dun think so. FUCK THIS OKIE! *With the end of the sentence, the wife takes the still gasping unfortunate new luo han and puts the husband dick into the luo han's slippery mouth.*

Enough about ornamental fish. Seriously speaking no one gives a shit about them.

Back to my weird dad. He doesnt even like luo hans! He likes nature remember? So he still likes fishes, but only ugly ones (not that luo hans are beautiful of course) he caught in reserviours and stuff.

When I was younger, I recently received phrases like this at home when my dad is watching TV: "Girl, come and see this caterpillar! See the colours! Got fake eyes somemore!"

Thank goodness earthvisions have quite stopped showing on normal TV (We dun have cable), and also thank goodness for my younger brother. He is now the official one my dad can share his unique excitement with. I tried, I really did, to suppress sniggers as he has to put down his gameboy impatiently to take a look at flying squirrels or shagging baboons.

Thats not the point of course. The point is the obscene amount of creatures my dad brought back whenever he goes out with my brother. I dislike them more and more nowadays. 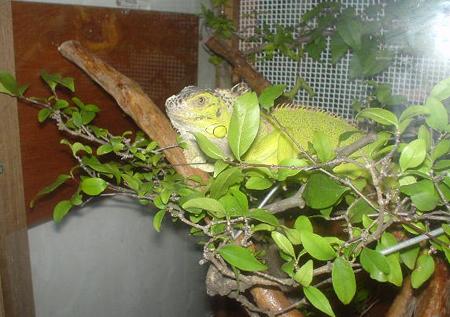 Now, iguanas are illegal I think, but this fella is gonna be given to a friend soon (and was given by a friend as well) , so dun even think of trying to get me arrested for this. We have named him Iguana after long thinking. Cloudy (my only "normal" pet, a dog, which was given by my mum's friend) loves Iguana. In fact, Cloudy is a very good natured dog. He loves everything, only when he can eat them.

I dun think Iguana likes Cloudy though, that selfish cold blooded thing. Well, I guess its a little hard for him to appreciate that something 10 times his size is cute, furry and huggable.

Heres a pic of Iguana sleeping. He is sleeping behind me as I blog. Betcha have never seen a sleeping iguana before.

I have no idea where my dad and bro went to recently, for they brought this back: 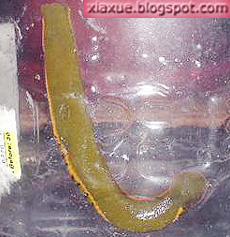 A real life leech, which, without sucking any blood, has survived almost 2 weeks. Very gross indeed. But I tried and it is quite fun to poke it a bit with a twig you know. It can crawl quite fast.

Among the creatures they brought back recently are caterpillars as well. Very disgusting ugly caterpillars. All 5 of them.

My brother has this habit of taking the bottle containing them around me when I am eating. Very stupid of him. I am not afraid of caterpillars, but I dun like the idea of them close to my food. I would shriek, and my bro will get a few smacks on his arm for being so tactless.

In case you are wondering why I didnt take pictures of the caterpillars: A few weeks after they came in, they turned into pupas and then into ugly black butterflies. My brother was very happy about this; he seems to think that it is his credit for making the caterpillars turn into "beautiful" butterflies.

I told him that it is their nature to do the life cycle thingy and nothing for him to smirk about. If anything, he has, despite the chance given to him to kill off the pests, given the cretins wings. How smart. Now they can attack me while I am in the bathroom again.

Well, my dad, satified that he has given my bro a chance to actually witness what his textbooks showed, put the load of butterflies into Iguana's cage. They seem to have gone by the next day; it is nobody's guess that Iguana is bored with his usual diet of cabbages.

As a post script, I would like to mention that today, I saw a cute guy at Cheers.

He bought some drinks, and queued up. I stood behind him, secretly willing him to take a look at me. Yes, maybe even ask for my number if he had the acquired taste people lack nowadays for appreciating girls like me.

He smiled at the salegirl and she smiled dreamily back.

And he took a pack of Durex Together.

Me and the salesgirl exchanged disgusted looks.

Suddenly, that cute guy has the attractiveness of a used facial blotter.

I was still irritated when I walked out of the shop. At least, I thought to myself, his gf would have to use Together. Together is cheap and well, cheap, in all senses. I personally perfer the Strawberry flavoured, thank you.