I wanna blog about quite some stuff but no time; I go to go sleep soon, recently I'm very very deprived of it...

So I shall just write about what happened recently... As briefly as possible!

I hate squat toilets. ( I know this sentence does not link with the previous paragraph but what the.) The toilet at my house is a squat one, and I hated it so much that I forced my mum to install a fake toilet bowl over it, despite her mumbled grumbles about how when she was my age she was not so fussy.

There are many reasons why seat toilets rule.

1) Because your nose is further away from the shit.

2) Because urine will no longer spray on the floor and have you step on it unwittingly. Sure, males still spray urine on the seat, but since females wun, it is 50% less.

3) Because you can now sit on it to read while shitting, which is, I personally think, one of the biggest enjoyments in life.

4) Because sitting will relax your muscles while squatting makes you cramp up.

5) Because no longer will you wet your pants legs as seat toilets are usually drier.

6) Your hp is less likely to drop into the toilet if you keep it in ur back pocket.

7) Since your butt covers the hole in the toilet bowl, it would not be that smelly.

Anyway, the fake toilet bowl I have at home predictably, feels fake. Unlike the strong ceremic feel most toilet bowls give, my toilet bowl can actually move around and it feels rather weird.

Thats why I like to use all the seat toilets I want outside of home.

Today at school, I entered the toilet with a slight stomachache. Plenty of time before next class, I thought.. Just nice for a good long shit.

But the problem is, the whole toilet has 3 squat toilets and only 1 seat toilet.

So I waited. And waited. After a good 25 minutes of my life wasted, I was beginning to feel pissed. I looked under the toilet door half expecting to find a couple shagging inside or something. Nope.. It was just a pair of normal shoes.

At the precise moment I decided I shall shout at her, she opened the door and came out. I scowled at her but she did not notice.

I finally got to sit on my toilet bowl!!! And being the typical Singaporean, I thought to myself: Well! I bloody waited for so long to use this toilet! I shall use it as long as I want too, to make the next person wait!

So I whistled and settle myself down with my palmtop and reread Goblet of Fire.

Just as Harry Potter got entered into the Triwizard Competition and things got exciting, an auntie knocked on my world rudely, bringing me back to the rather smelly muggle world I am in.

"Girl!", she shrilled, "Inside got toilet paper?"

"No.", I answered sullenly, ruffled that I got interrupted by such a silly question.

A few seconds later when Vikter Krum was scowling at Harry, the auntie asked me what I am doing inside, taking so long.

Now, thats the point of my whole toilet story. I THINK THAT PEOPLE SHLD NOT ASK WHAT OTHER PEOPLE ARE DOING INSIDE TOILETS AS IT IS A VERY PERSONAL QUESTION.

I did not feel like I was obligned to answer such an embarrassing question at all, and contemplated a little about telling her it is none of her business what people do inside toilets. I thought the better of it and factually told her "Shitting.", since she did ask in a polite voice afterall.

Shitting is fine. But what if I had been changing my menstrual pad? What if I was plucking my armpit hair? Should I have told her the truth?

Of course not. But yet, people dun see the point and they still keeping asking that question to people using the toilet. IT IS ULTIMATELY RUDE! Well, cubicle doors are there for a REASON.

The next time someone asks me what I am doing in a toilet, I would reply, "I am testing to see if I stayed here long enough you would ask me such a rude question."

Today June and I went to collect our uniforms and phones for our new job promoting Mitsubishi hps... 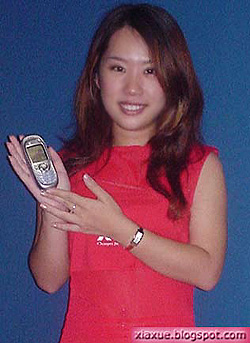 I can't believe I am supposed to wear sport shoes with them! It must have been years since I last wore flat shoes. The embarrassment of height is the sole (weak pun!) reason why I am not gonna say which Hello! shop I will be attached to.

Ah well... At least I got a free colour phone to use! 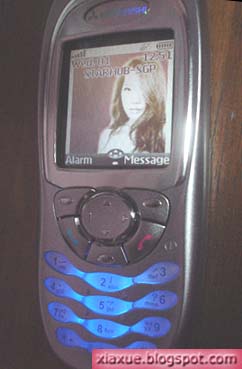 Yeah okie the wallpaper was just a test, dun gimme the revolted look.

It is not nice nia.. Looks like a peanut. I dun think I am supposed to show this to anyone (all 400 of you) since it is not officially launched yet but hack it lar...

So yeah, good night peeps! I will blog more after thursday, because I have to hand in a project but the said day and I will be so ultra busy.