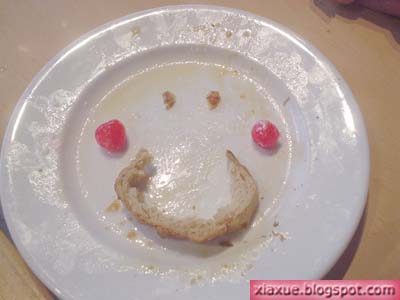 (Thats the result of food leftover at cafe cartel which I went to with Shuyin and Idris yesterday, who, I would like to mention, kindly accompanied me while I had to wait for the MP3 seller to be free. Oh btw, nobody likes glazed cherries. They should have remained in their original form.)

In fact, there were a few reasons why I did not blog yesterday at all.

Firstly, I was so filled to the brim with joy, I'm afraid that if my fingertips touched the keyboard I would just burst. If I burst, I would imagine several people to be very upset, including my maid who would have to clean up the mess.

Secondly, it would be the reason why I am so happy, and thats because (if you were in my irc channel you would have known) I talked to Jeremy for around 3 hours on the phone. The end result is that by the time we finished, it was 2:30 and a tad too late to blog. Besides, I was in this misty mood so I doubt I can manage to string object, subject and noun together to form a proper sentence.

The reason why I managed to pucker up my courage to call him, is thanks to this idiot.

Someone tried to act as if he was Jeremy on my tagboard, claiming that Jeremy (lets call him Jem for short) had just seen my site. Horrified, I took up a nervous finger and dialed his number wrong twice.

When I finally got through, I accused, "You saw my site ah!"

I sighed with relief and we just continued talking, till he told me he would call me on his house phone and we continued yakking for 3 hours.

Very sadly, I have no impression of what we talked about at all. I have Dory memory! Or perhaps it has to do with the fact that I was orgasmic half the time.

I realised something very good, which is that I have always thought Jem was considered, by universal standards, cute. But that does not seem to be the case.

After proudly showing his pic to everyone I can show, my mum commented that Jem looks like a 95.8 DJ, Billy, who is a disgusting faggot.

Shuyin said that in several angles Jem resembles, most unfortunately, a monkey.

Plus a whole lot of people said he looks gay (which equates to cute actually since most gays are darn cute) and some say he looks like an Ah beng.

In my opinion, this is wonderful. If only every girl thinks he is gay/monkey-like/bengish, I would have far less competition and Jem would not think that he is damn cute so he would not mind his gf being less cute, or short for that matter.

I still insist that Jem has good genes. Afterall, he is tall (around 1.8 is my guess), rather fit, smart (Cat high, SIM), has a beauty queen as a sister (yes she won both Miss SP and some other competition and is now a famous model), and is flawless to the point that he even has perfect eyesight.

Lets see. I'm short, rather flabby, smarter than average, has an artist for a dad, and I have perfect eyesight too.

Wonderful. Together, our kids will be average height, average flabbiness, relatively smart and corny, would be glamourous and artistic, have perfect eyesight, and look like Ann Poh and Billy mixed (how fucking horrid)

Anyway. I'm sure everyone is so freaking sick of Jeremy and more Jeremy. 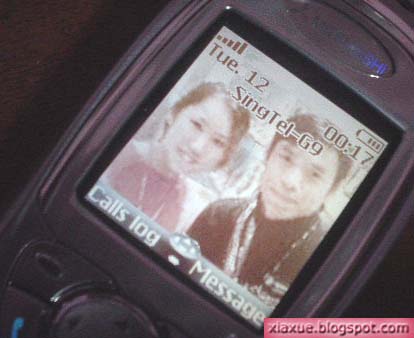 So. I bought my MP3 player yesterday too!!! 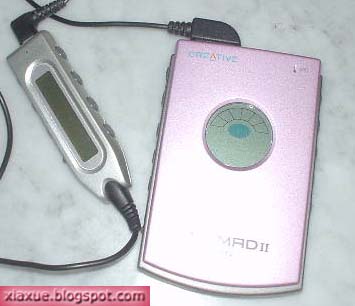 This is a Nomad II mg, and I was supposed to buy it from an auction fellow at $200. Yes yes, I like it cos it is pink. Anyway, I told the fellow that I would not have the cash until 2 weeks later, which is yesterday.

So yesterday he messaged me, and I told him I dun have the money.

He angrily said I played him out, after making him wait for 2 weeks.

If you hate Singapore, I got a good deal for you. 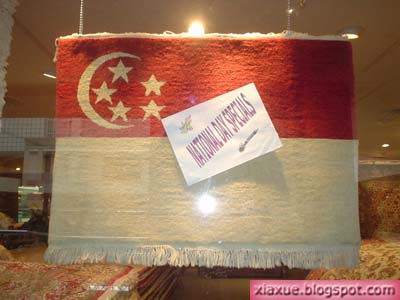 Now you can officially step on Singapore everyday with filthy feet, and the insult is complete with the deformed stars too.