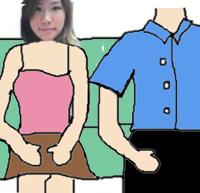 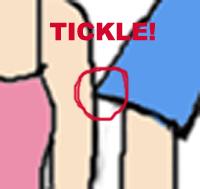 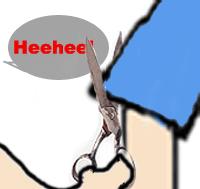 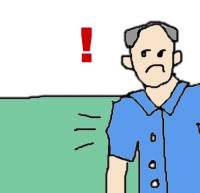 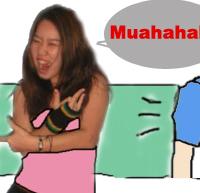 I wish I brought along a pair of scissors yesterday. Some uncle who sat next to me did precisely the shirt sleeve tickling thingy. I squirmed, I moved, and squeezed, yet nothing I did could escape this filthy sleeve (the rhyme is not intentional). If only I had a pair scissors! I would cut off the cretin's sleeve and save the rest of the world from his tickling!

No use dreaming about it now.

I used to have long curly hair right? And its all over the place... If I still have my curly hair, I would tickle his face with it! Let him have a taste of his own medicine. But no! My rebonded hair is so bloody flat.

The pair of scissors would have another use as well. The uncle STINKS. I could threaten him with it and he would move seats. Now, why do some people smell so much? Wait, I think I dun wanna know. The fellow sat beside me and my nostrils were filled with his horrible stench. WTF? This is not fair! I did not pay $1.35 or something to smell rotten eggs!

I suggest, that everyone should go through a smell test when they enter the MRT. If you stink, you would be asked to go into the smelly chamber to travel to your destination. In the smelly chamber would be tons of other smelly people, and if you stink and you can't smell yourself, perhaps you can smell others.

Personnel 1: "Well done. Thank goodness for the gas masks. Can you imagine if this fellow sits beside the famous blogger Xiaxue? I dun want her to die? She seems to be a big fan of SMRT."

Smelly uncle: "Where you all siao kias taking me to? I just never bathe for 10 days only, the gas mask is a bit too kua zhang right??!"

Personnel 1: "Sir, you shall go straight to the smelly chamber, the end of the MRT. In there, you would see all the smelly bastards like yo.."

Smelly uncle, interrupting, "I AM NOT SMELLY!"

Personnel 1 slaps the Smelly Uncle with a heavily padded hand. Some debris caked on the uncle's face falls off. The uncle heaved a deep breath and the breath comes out in a light green misty colour.

Personnel 1, with delibrate patience: "You are FUCKING smelly. And DO NOT INTERRUPT ME!", he boomed.

Personnel 1 grins cheekily at Personnel 3, whom he thinks must be impressed with his authority and volume. Personnel 3 happens to have very nice breasts.

Personnel 1: "As I was saying... You would be with the rest the smelly people. Sitting with you would also be all the bangala who are caught either 1: Holding hands with another bangala, or, 2, caught oogling at females. They could also be stinky of course."

The Smelly Uncle shudders. He thinks that the Bangalas might come hold his hand, but he forgot he stinks so that would not happen.

Personnel 1: "We have also caught some other offenders as well, although these people might not deserve so much to be in the Smelly Chamber. They are people who tickle others with skirts, or sleeves, or scratchy curly hair. We also catch people who play with ringtones on the MRT.

"These people are punished to put a 3310 to their ear and listen to the same ringtone on level 5 all the way till they reach their destination. This would teach them how it feels like to be an innocent traveller who has to tolerate this torment every time a similarly bo liao person does the ringtone testing.

"We also catch people who sing on the MRT. Are they stupid or stupid? They think that when they have earphones in their ears, they cant hear their own goddamn singing so others cannot hear them as well. What bullshit. We punish this people to listen to F4 songs all the way till they reach their destination too."

By now the Smelly Uncle has pee-ed in his pants, making, weirdly, no difference to the way he smells.

Yes. If I rule the world, the MRT system would really be good, no?