Skip to main content
- October 21, 2003
Really haven't been blogging properly for a while now.. I used to update everyday, but now, I realised that I don't really have any things to bitch about. Thats coz I seldom go out nowdays, and the only places I go to are June's and Idris' house for projects. However, the projects are finally over now, and its a weird thing, coz I actually wish that they are still existent.

All the projects suddenly end off at the same time, and this while when I was so busy with them, I rejected job opportunities, rejected dates and stuff, so now I'm all alone and bored while the rest of the world is busy with exams. Thats super sickening.

Today I got home after a presentation which I screwed up for my group, feeling particularly grumpy, and then fell asleep till 6pm when I woke up feeling very much alone although my bro and maid are both at home.

Haiz... I managed to struggle till now, when I decided I shall blog, although I have absolutely no interesting topic to blog about at all. I know! I think I shall blog about Michelle Saram and how much I hate her. 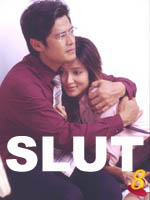 Actually, I don't really hate her, but more of the typical roles she gets on TV. I am so fucking sick of the Don't-fall-in-love-with-me-although-I-am-so-pretty
-coz-I-have-got-cancer-and-I-am-gonna-die-soon roles she gets. She is like that in Meteor Garden II, and she is like that again in Baby Boom.

Lets see how a typical situation would be like for Michelle Dearest before she chooses her roles.

Director to Producer: "Hey, I think I need a slut for this show. She would be the third party, but I wanna make my viewers confused coz they all would love her as she looks damn innocent. She is a thorough slut actually, but males would never notice, and females would get very angry coz they know the truth. Hows that? Who should I get?"

Director: "You want the role?"

Saram: "It depends. I'm a supposed to be an innocent slut? I can do that!" With this Saram opens her eyes very wide and blinks 3 times, and proceeds to take off her bra.

Director: "Oh thats not necessary my dear! But.. but.. Don't stop!"

Saram giggles and giggles madly (the female producer thinks she is siao) while pretending to put on the bra but accidentally reveals a nipple anyway.

Director: "Oh, I'm soooo getting you for this role.."

Saram, giggle again: "Hee! You think I can do that? But I have some personal criteria for this show... Its called baby Boom, isn't it?? Yippee, I get to shag Li Nan Xing!"

Director: "But Nan Xing is old and wrinkled my dear. Why not shag me?"

Saram: "Don't tease me, you little twit! *giggles* Let me ask you, do I get to die of cancer in the show?"

Director: "Oh ok I will make u die of a rare heritary disease that would make you look ugly."

Director: "You are supposed to be a career woman!"

Saram: "No running around in beaches no Michelle! And I wanna shout at the beach like thats gonna help anything at all! I wanna be dressed in white and I wanna write things on the beach... That would be sooo perfect for the image I wanna get!"

Director: "Write what on the beach?"

Saram: "I already thought of it! I would sit back to back with Li Nan Xing on the beach, with the sea wind blowing my soft hair around. I would proceed to write words on the sand with a twig. He would ask me what I am writing, and I would say that when I am young, i like to write my troubles down on sand, so that when the tide comes in and washes off my writings, I feel like my troubles are all washed away! The scene would end with me giving a big smile, suddenly standing up, and urging Li, a 40 yr old flabby man, to run after me on the beach."

Director: "Fuck! Men would so love this! You are a genius!"

Saram: *giggles* "Really? Heeheehee... I wanna shout at trains too."

Saram: "It is just ME to shout at stupid objects. It relieves stress, supposedly."

Director: "I supposed I could fit that scene in if you insist..."

Saram: "Could I have a personal star in the sky named after me too? I would like to call it 'Brave Kris'."

Director: "You did that in Meteor garden and it is a little too much, isn't it? Your name was Ye Sa (in Singapore if she were Cantonese she would be called Yip Sar), and you named a star after youself?"

Saram: "Oh alright. So when do I start?"

Yup. Thats how she gets her roles. I can do a very good job of imitating her! But I can't do it here of course.

I hate Michelle Saram, because I strongly because she is the one who started the trend of "shouting at huge bodies of water".

You see, I stay just beside Pandan Reservior. And I mean beside, just 200 metres away from my block.

Occasionally, I get a ear splitting scream from someone who is shouting into the reserviour. It is plain silly. It is stupid. It is moronic. How come people don't realise that by shouting, nothing gets solved? Their problems would still exist, plus they irritate the shit outta people who are so unfortunate to stay near the reserviour.

Some might argue that stress is relieved when shouting is done at a huge body of water. Now, it is not the fishes swimming inside which offended you. It is probably your boss or someone like that. So go shout at him, bet that would be hitting the problem at the right spot. DO NOT SHOUT AT SILLY RESERVIOURS, YOU LOOK AND SOUND STUPID. Imagine if the reserviour were to be alive, it would think you are crazy.

Bloody hell, its all Michelle Saram's fault. Thank goodness I do not live near a train station as well. Dumb people possibly thought they would like to shout at trains the same way Miss Saram does.

No wonder Jerry Yan is not interested in her. 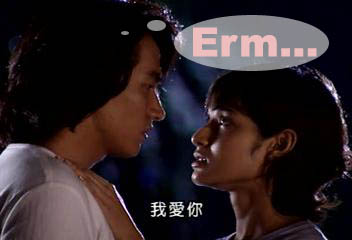 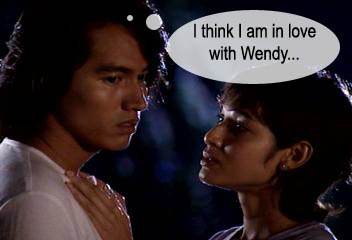 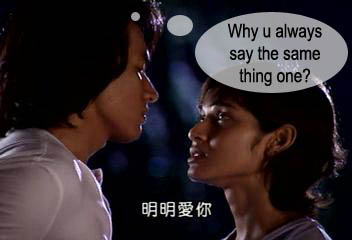