Skip to main content
- November 28, 2003
I just found a blog entry I wrote on my clie some time ago which I had forgotten about. Upon reading it again, I believe this entry will offend a lot of people, because it is about something very sensitive, which is... race. However, as usual, I am going straight ahead with it. Please do not scold me or something, coz remember I am merely a 19 yr old poly student. My knowledge of the world outside is limited, and if I am wrong, correct me. There is no need for insults. If you disagree and you think u are justified, state your reasons too.

The following chunk is merely what I felt that day. I could be wrong, of course.

Watching ARE YOU HOT? yesterday really almost made me puke blood.

Alright, for those of you who don't know what the show is about, it is a competition to find out the hottest person in the whole of US; hottest meaning the sexiest.

It is sodding obvious that the judges are trying their best to be racially careful. There was this Afro American girl who got a full ten marks for her face. It is ridiculous. Her nose is too big, her face is not defined enough, and her lips are too thick.

I got hopping mad and Eileen said that although she is not worthy of a ten, she is pretty enough for a black.

I mean, its a fair competition isn't it? So what if most blacks have thick lips? Thicks lips are not supposed to be considered to be an aesthetic thing, so too bad. Is it fair that a white gets penalised for having thick lips but a black doesn't, just because most of their race looks like that? It is totally unfair to the whites. Well, i see the whites getting penalised for having freckles. And blacks dont get freckles. Why not excuse the whites for having freckles, coz most of their race have it?

Nowadays the racist thingy gets so sensitive, and everyone gets so afraid of being labelled as a racist, that things are going the opposite direction, no?

Another example is this ah beng looking chinese contestant. He has single eyelids and slanty eyes. The judges claimed that his eyes are beautiful. HELLO?! Sascasm? Come on, the stage is full of angmohs with deep set blue eyes framed with thick eyelashes and the judges claim a chinese man's eyes are sexy? Please, there is no need to tell so hard to tell people u are racially harmonious. In my opinions, it only makes things worse by bringing the racist issue to light.

The judges are so full of bullshit. Directly after the full-marks-face black girl was this white girl. Now, the first girl is FAT. They claimed that her body is curvacous and sexy. As for the white girl, one of the judges says she has fat thighs when obviously her thighs were like 50% thinner than the first girl. Yet another attempt to tell the world how racially harmonious America is. Why isn't the black girl criticised for having thunderthighs like the white?

And then there are these "punk" like contestants (afro americans) who managed to get into the semi finals while acting hip hop or something.

One of these fellas i saw, has an afro hairstyle, a mediocre face, is too fucking fat, and has a very loud voice. Hello??? Who let that fatso in? Were the people judging the auditions blind? Too bad man, this is a totally superficial compeition based on looks. He may be smart, he may be kind, but he is definitely in the wrong competition.

The judges claimed he had the X factor. X factor my foot. If he was that hot, I would like to see Rachel (the supermodel judge) fuck him right now. I bet she wouldn't do it, coz he is far from hot and nearer to grosteque. All the hip hop and snide answers only make him even more childish and less sexually desirable.

On the other hand, i don't see any whites passing the test if they were anywhere near fat. Oh no! They have higher criteria to meet, coz they are whites! Its disgusting.

I drew a comic. 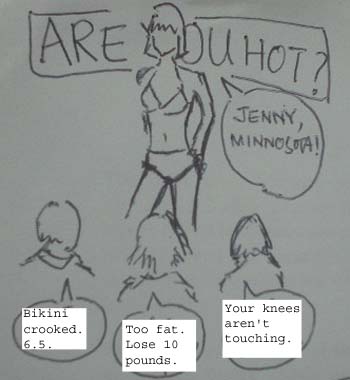 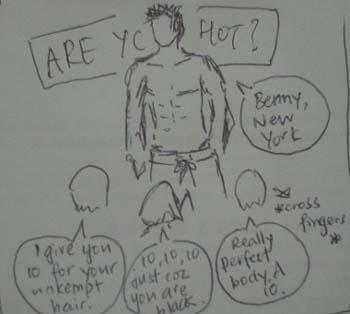 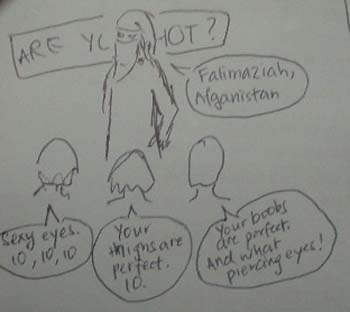 I bet my Rolex that the winner would be one black, and one white. If the afro american won because he/she is sexy enough, of course it is fair. I have seen some of them who look really good. However, i think its really unfair if the afro american won just because of the silly race issue. I'm sure he/she would not like to win a contest by this method too.

To me, if a white is really sexiest, then why should he/she not win? It is supposed to be a fair competition isn't it? If there is such an arrangement, why not have separate competitions for all the races?

Don't even get started on the "calling blacks blacks is racist thing". I am not racist. I do not know any blacks myself and there is no reason for me to look down on them or anything like that.

I know I should have used the term afro americans but i'm blogging this on my clie so its too troublesomely long. Anyway, if we can call caucasians whites, why can't we call Afro Americans Blacks? It is merely a term and whatever connotations you have about the term which is derogatory is purely ur own and not mine. So if you think i am racist, actually u are the racist one. Think about it, isn't it possible that in my dictionary Blacks=smart friendly people who can dance very well? Whats so racist about the term blacks? Black is a nice colour.

-It is the extreme anti-racists that are causing all the discomfort.-

Upon reading about the issue again, I really think that people should stop being so sensitive and serious about the racist issue. Remember when we were all kids and every race went to kindergarden together? I remember we (chinese and malays kids) used to tease the Indians for having the smell of the oil they use. And then the Malay and Indian kids would say that the Chinese kids are not opening their eyes coz Chinese usually have small eyes?

Did anyone take offence? Were all the kids racist? In the end, didn't everyone play together anyway? All these are merely differences of each race, and a bit of teasing will not hurt anyone. Whats with all the sensitivity anyway? Truly harmonious people will not take offence so easily.

I remember I was talking to this Indian friend of mine, and she told me that the greatest insult will be when, for example, an Indian joins a group of Chinese friends and they tell him that he is totally like them, and they like him just as they would like a Chinese, because this means that the Chinese are not accepting the Indian as what he is uniquely as a person of a different race, but instead comparing him to a Chinese and thinking that he is as good as a Chinese.

Alright, actually it does not make sense, but hey, I'm tired.

Whatever it is, fucking serious people still exist, and because they cannot take a joke, they make the world a miserable place. Please dig up my archives to read what I think should be done to serious people.