Ok I got alot of things to blog about. So everything such be in short.

For super faithful readers like Jo and BlueBalls, you would know that my favourite minister is Vivian Balakrishnan right? Well, I worked at Ritz Carlton a few days before, and guess what? I served him!! Hahaha... Its so exciting...! I think he is a very sexy man!!

Thats not the point of course. The point is, the fucking manager Khor caught me for my hair colour again. This time round, I pinned up my very short fringe (can u imagine how hideous that looks?) and sprayed it black already. However, the black spray is not lethal enough, and some parts of my hair remained dark brown.

He took a look at me and claimed that he has to deduce my pay by two hours.

I took him he has no rights to do that.

He claimed that Ritz Carlton has rules, and either we follow the rules, or leave. He then gave me a smug look and asked me what is my choice.

I said there were no such rules until he came, so who is he to set the rules when the banquet manager himself is not saying anything at all?

He said rules are rules, I could check with HR.

He then walked to the office and proceeded to give me my timesheet and asked me to go home immediately. I shouted that I wanted to see Brendon, our banquet manager.

Brendon is not around.

I shouted that I want to see the F&B manager then, this angmoh called Robert Lagerway.

So I stormed out of the office, this time with me in control, walking in front, and he tagging along. Very luckily, we saw Lagerway on our way (I know its a horrible rhyme).

Khor started blabbering in broken English to Lagerway. I swear, that man cannot form a proper English sentence to save his life. He actually called me a "he". DO I LOOK LIKE A FUCKING TRANSVERSTITE?

Lagerway is a blond angmoh. And here silly Khor is, rambling on about how he thinks all staff should have black hair. Lagerway looked very uncomfortable. I explained to him that there is nothing wrong with hair dye as long as it is not too outragous, right?

At first he sided Khor coz he (I believe) thinks I am one of those stupid part-timers who didn't even pass PSLE. Of course, he doesnt know that I got 269 for PSLE, which is the highest achievement I got in my life, second being that I won an Art competition in Pri 4. Thats not the point of course.

The point is, I won the first stage coz Lagerway said that in future, I ask Human Resource to judge my hair colour before I work at banquet. If they say its fine, its fine. Good! Which means I don't need to give a shit about Khor's opinion as long as I lick HR's boots.

This is the best part. Just as Lagerway asked Khor whether he agrees with this method, and Khor gave a very forced smile.... I WHIPPED OUT MY LETTER.

"Mr Lagerway", I said. "I have a complain letter to give to you about Khor here."

"Well, I wrote it on behalf of the banquet team. But I have not got them to sign the petition yet, coz I didn't expect to give it to you so early."

And then Lagerway flipped the pages to read. One... two... three... four... four pages... Font size 10. Khor almost stared his eyes out at the letter. He looks like he wants so much to snatch the letter from Lagerway's hands to crush and put into his mouth and swallow it, but can't.

Up till now, I have no idea what happened to Khor. He is possibly getting sodomised by Lagerway.

My New Park banquet manager decided to hop hotels and move to Hilton where there are apparently more prospects than good ol' New Park. He then shifted the entire New Park banquet team to work there as well.

Now, Hilton has this restaurant/ballroom at the 24th floor, where it looks out into a nice view of Orchard Road. One of my colleagues who worked at Hilton for a long time, told me that the 24th floor is haunted and I should never ever think of going into the toilet alone.

I asked her why it is haunted. She said that a chef once jumped from the building, to land on the 5th floor.

That night, I worked halfway and decided I shall skive a little by going to the toilet for a long shit, conveniently forgetting my colleague's ominous foreboding.

I stepped into the toilet and started to play games on my T500, my 8910 wedged in the waistband of my banquet skirt.

I heard noises in the next toilet. I cannot make out clearly the noise, but it was just like someone using the toilet... The usual snuffling and stuff. Now, the opening of the main door is a loud affair, and I did not hear it open at all. So there should not be anyone in the toilet at all...

I froze in my seat, listening hard for more sounds.

Suddenly, the sanitary bin, a metal thingy with a lid, gave a loud "CLANK!" as the lid, which was initially left open, fell down.

I almost jumped out of my epilated skin.

Hastily, I stood up.

They say money makes the world go round. Its true. I put my hand into the toilet bowl (which I thankfully did not shit in), pulled out my drowning 8910, and completely forget about the toilet having ghosts and started thought about my $450 flying away.

I quickly used the hair dryer to blow it dry, but the problem with 8910s is that 1) its parts cannot be taken out to dry unlike 8250s and other nokia phones and 2) the bottom part is a very good space to keep water in.

My 8910 gave me one last suffering look and died. No one can revive it later.

Oh yeah I did rinse it in water first.

So anyway, by morning it cured by itself and is working PERFECTLY fine. See? I say its Hilton's fault. That place is fucking haunted alright. And guess what? I later realised that there really isn't anyone in that toilet at all.

Today, I went to watch Le Divorce with Eileen. Its a sucky show. I thought it was RA and waited at the edge of my seat the whole night for some boobs but none came.

Anyway, before I met Eileen, I went to dye my hair at Toni & Guy. Its free anyway coz they needed hair models. Tomorrow I will be going for a free hair cut too by Toni & Guy's director! I'm quite excited!! Pictures tomorrow.

Heres a picture of Eileen and me... 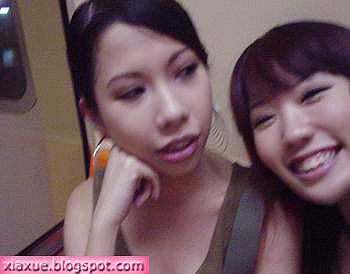 See? I'm not a selfish person. I look like a farty clown (*winks Eugene, if u read this*) in that picture and the mere reason why I posted it up is coz Eileen looks pretty! =D

Oh yeah yesterday. Yesterday I worked for Tiger Beer at this function which is at the ZOO's restaurant!! Its really the best job in the world! We got chilli crab to eat... 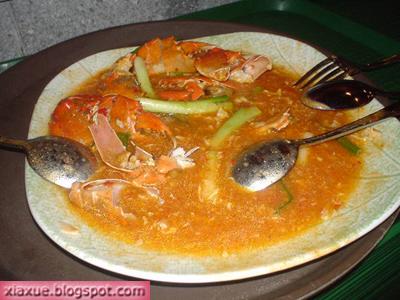 And then we got a FREE visit to the night safari! 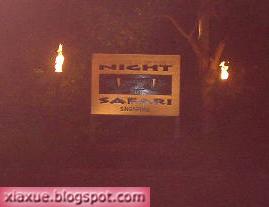 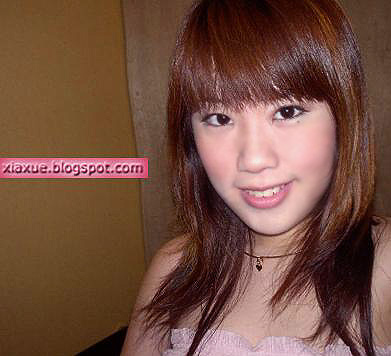 In case you are wondering, that picture is there just because I feel its been a long time since I last put up photos of myself and I need to get more self-centred.

I worked with these two girls, and one of them is a typical Ah lian who would be a great partner for Khor because she too cannot speak English to save a cockroach's cheap life. The ah lian has big boobs and, is ugly, wears distasteful make-up, smokes, and looks like a typical tanned SPG.

So, this New Zealand fellow from work tried to pick her up and guess what? They cannot communicate coz she kept not understanding what the angmoh said. If I had balls, I would have laughed till my balls cramped. 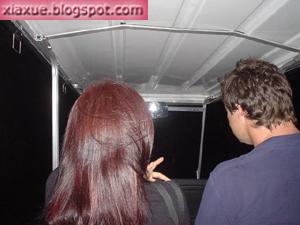 There... The ah lian and the angmoh. I'm very insulted by the angmoh. Why did he choose to pick her up and not me? If he picked me up, he would not have to repeat every question 3,1927 times before she understood him halfway. Now he possibly thinks all Singaporean Chinese girls are damn stupid. And she is ugly too! But guess what? She looks like a perfect slut, which is precisely why he picked her up; for an easy fuck. Oh well.

Today, I was walking along Orchard while waiting for Eileen to come, and happily clad in my newest acquisition from This Fashion, a pair of champagne coloured satin pants.

I think the pants look expensive, which completes my rich look. And I don't speak like that ah lian. I am not a low class slut.

Alas. As I was waiting for the traffic lights to turn read, an old old angmoh fella approached me. He is balding, has a very big tummy, and is (I presume) at least 55 yrs old.

He asked me where I am going.

Meeting my friend for a movie.

Ah... Are u sure u wanna go for a movie? Why not have a drink with me?

Yeah I am sure. No thank you, she is waiting for me already.

Are you sure? (shut up and quit repeating yourself)Where do you stay?

Do you want to come down here tomorrow to have a drink with me?

I guess I still look like a slut afterall. If not, why do I keep attracting all the old men and the liars and the bengs?? WHY WHY WHY???!

P/s: I just did this online fortune telling test thingy that June sent me, and see what it predicts of my future... 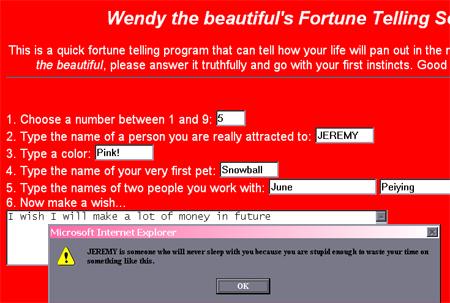 Hover over to read the words.

Everyone chant with me.

Ok you can stop now.