20 people wants Xiaxue to close down her site.
80 people want her to please go on (within just 10 hours). Hundreds more have not got the news yet.

The answer is obvious.

After reading 80 plus encouraging emails, and reading another thread in the stupid hardware forum place, I'm slapping myself for not realising I really shouldn't give a shit about the retards.

Spare the mushiness, you say. So just one sentence. Thank you so much, readers, really. And for one more thing: I realised people who appreciate my kind of humour, are those who are smart. And I am not saying this to boot-lick anyone.

From all the emails, I gather that my readers are all capable of writing well themselves, and this by itself at least proves that they received good education. In conclusion, people who dislike AND FLAME me so much, are either stupid or really narrow-minded people.

WHO GIVES A SHIT ABOUT DUMB PEOPLE. (not me, do you?)

Of course, the smart (aka myself + readers) shouldn't be bothered arguing with the stupid. Its really no point, isn't it?

Somehow, after I saw through all the insults and stuff, I begin to find it really funny.

Heres one real life example from the retards:

EG:
Ewiser (Responding to the retards): "You guys are really fcuking too much."

I think the "fcuking" is an adjective and not a verb.

Ok the above statement is irrelevant but I just thought it is cute how it has the double meaning. Here's the real thing:

huh?: "Do you guys know what does BLOG means? C'mon, she dare to voice her opinions and thoughts about her life. If you don't like it, don't read it.
It's better then young boys who hide behind their nicks and flame folks.
One who dares to do things against convention is better then those many who will only criticise behind the anonymity of a nick but tremble and pee in their pants when they get challenged in real life."

Retard2 (nick is too long, predictably some car's model): "Then u gonna drink it?"

There you go! A perfect example! LOL... An intelligent being arguing with a retard. He can never win because the retard can't understand reason and logic. No point arguing. I say, just go kick him in the balls. Just in case he has the misfortune of having kids in the future who inherited stupid genes (stupid is a noun not an adjective).

Haha the dumbass forum bengs are so stupid that they thought that the wehatexiaxue.blogspot.com site is someone hating me and they are actually celebrating it, not knowing that it was yours truly who set it up. LOL. PEA BRAIN PEA BRAIN!

Lets go on to supporters!

I am so touched

I am. Really. If you are one of those 80 people who emailed me, you are part of the reason why I shall fight till the end and continue to whine and don't give a shit about the spammers.

I am removing the comments links though. Its inevitable. But I would really love to hear comments so feel free to email me. =D

Christmas photos!!! I know its a tad late, people! 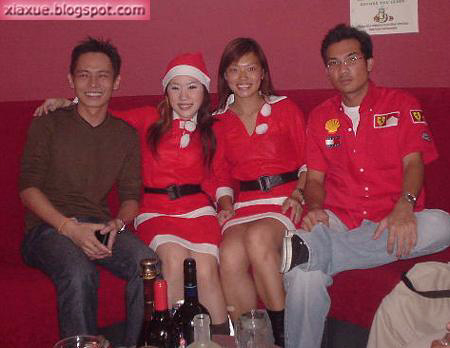 Work for Tiger on 23th. Girl beside me is called Cindy. If you know her, please do not tell her I posted her photos. If you really wanna do it, then tell her to save the photo from my site then, coz I am lazy to send it to her. 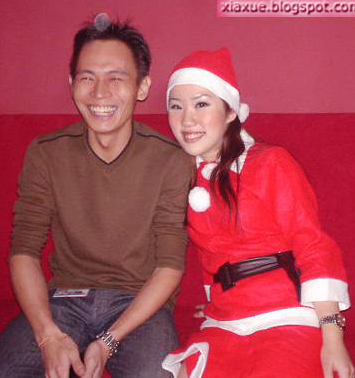 One of the guys there, called Derrick. No, thats not a halo on his hair. My camera seems to capture a lot of orbs. Orbs are supposed to be ghosts. Ok I'll stop it, girls. 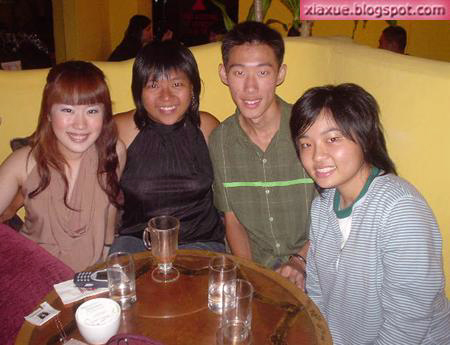 Me, Potty Peiying, Ghim the Giam and Wong the Lawyer went to Coffee Club Express for some drinks. Its really nice and comfortable... Big plush cushions everywhere. However, Ghim's drink tastes like... Oh forget it. Nothing can taste that awful. Its tirumisu heaven or something.

With a sudden urge for some adventure, we set off for a railway bridge at Sunset Way, which Wong brought us to doing secondary school days. However, as a very unpleasant surprise who discovered that plants have grown to overpoplulate the path that we are supposed to walk. 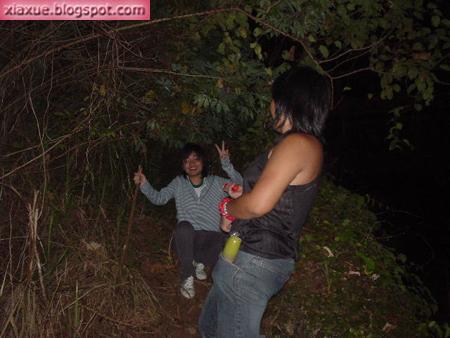 Actually its a candle.

Oh yes we countdown on our way there. Dammit.

See what we found in the secluded park! 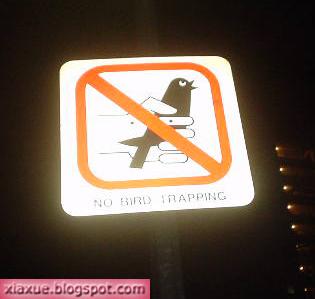 It could only mean one thing, conveyed in a very subtle way:

I went home a happy girl and someone furry and warm greeted me by sitting right outside my elevator's doors. 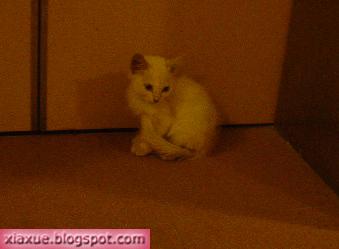 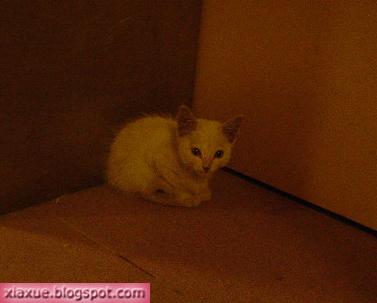 I took it home as a christmas present to myself but my dad took it by the neck and promptly brought it downstairs again. Damn!

No point being mushy to Shengrong. You know we all love you, don't you? And we don't even love you because you are bloody loaded and would possible be the capital sponsor to our businesses in future. We love you because you have a big house, and Auntie Betty comes in a package with you.

Good nights all of you! I'm sorry if I shocked some people. Its all true. The site is back, bigger and better.

And a happy happy new year if I have no time to blog tomorrow~!