My favourite is the one I left for secondary school friend Jing Wei:

So anyway. I got nothing much to blog about today, so I shall just post some photos.

To celebrate that I am celebrating Christmas for YET another year being single, I bought a christmas gift for me. 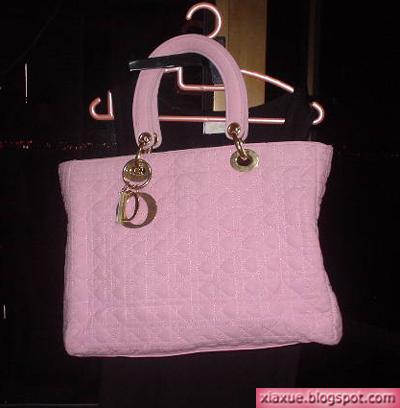 Its SUPPOSED to be a Dior bag (and its pink too!) but I got it cheap at Yahoo! Auctions because the letter R is missing. Who cares about a stupid R. I got a nice DIO bag! All I want for Christmas is a pink Dio bag!

I was packing my room, and I found several miscellaneous items. 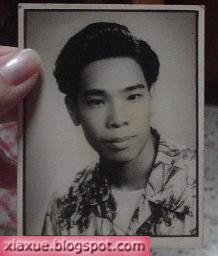 My grandpa is close to eighty currently. He is a mighty nice guy, and he was showing me old photos when I saw this one and snatched it away. I used to keep it in my wallet coz I think he looks really really suave in this pic. That was years ago... Hmmm... But I still think he is cute. I don't mind marrying my grandfather if I were my grandmother. Ha ha... 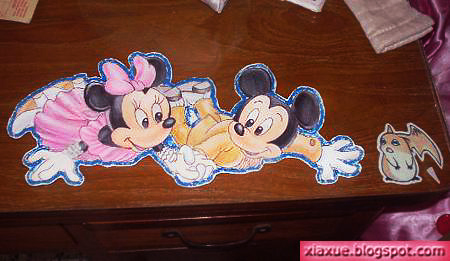 I found some old love-letters that i wrote, and this one was particularly long. 4 foolscap pages. Attached is this picture that u are seeing, a mickey and minnie pic, from a jigsaw puzzle that I gave an ex. No, its not traced. It is meant to be given to him but I forgot what happened and it didn't get sent.

I saw the picture and decided that I am very talented indeed *ahem*. I cannot imagine how I managed to paint that. But my artistic talents seem to stop at the drawing cartoons stage and dwindled ever since. Damn. Anyway, the little digimon is my fav digimon! But I don't know what its called. I just draw it based on a digimon card my bro has. Its so cute!

I found this envelop that has Jeremy's drawings on it... He drew it on a seat at orchard the night we watched Pirates of Caribbean. Now he is possibly drawing his gf nude. Dammit. I hope she has cellulite.

I was out with June yesterday for some shopping. I suddenly recalled that the guy I liked for so many months is attached. I wailed, "JUNEEEEEEEEEEEEE....... DO YOU KNOW THAT JEREMY IS ATTACHED??!"

Me: "He is fucking someone else!"

June: "I was about to say 'Then you go fuck someone else too lor' but I realise he doesn't care. Haha!"

June: "Ah I know! You go find someone else to fuck his girlfriend!"

June: "Not in friendster meh?"

Me: "No testimonial yet."

Its a good idea. I wait till she writes something. And then I will get the winner of the toyboy audition to seduce her and Jeremy will be heart-broken and I will take him into my arms to nurse his wounds.

On second thoughts. I decided to get a new boyfriend. Who cares about Jeremy? I wanna get an Elite model as a bf. He shall act in Lightyears. He will be really cute. And he will be an entertainer. He will even write that he is in a open marriage with me in Friendsters, although the term "open marriage" in itself is oxymoronic.

Ladies and gentlemen, I present to you... 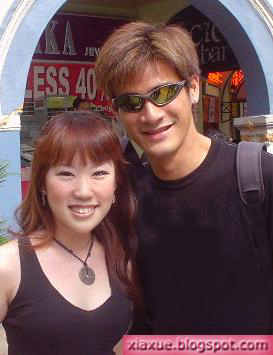 Are we a happy couple or what?