There was this couple in front of me when I was on the bus.

I sit behind them, directly behind the guy and ajacent the girl.

Suddenly, the girl pecked the guy on the cheek.

The guy smiled, and pecked her back on the cheek.

They had a smooching competition to see who could peck more.

The girl won, and smiled triumphantly at the guy.

The guy looked at her, and gave her a sudden smooch on the lips while the girl tried to act surprised.

I got really pissed off and nudged the guy on his back with my knee (with the seat in between us of course).

He seems to feel that pretty much arousing so he smooched her more.

I nudged him harder.

He continued the smooch, and most disgustingly, the girl was STILL acting surprised.

So I took out a Ritz Carlton matchbox set his hair on fire. 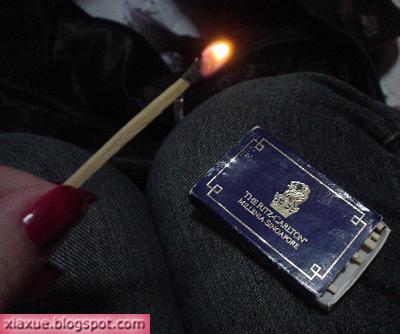 "Oooh! Help help!", he cried, as he tried, with no avail, to stop the flames from spreading to his sideburns (no puns intended).

I smirked as I folded my arms. I sat back to enjoy the show. I sat back not because I wanted to act cool but because the fire was making it a little hot to sit close to the subject of interest.

The girl was in major distress.

She screamed her head off.

Serve her right for smooching in front of me. I bet she is the kind that smooches on escalators too. The next time I see couples smooch on the escalator, I shall stop the escalator suddenly and pretend to point at the some old uncle and say he did it. The couple will be halted in their smooching and might, if luck prevails, have knocked each other's teeth off with the sudden jerk.

So anyway, I slapped the girl and asked her to shut the fuck up.

She begged me to save her bf between mouthfuls of mucus. The rest of the bus heck-cared her coz they are watching the 14th rerun of Star Awards.

So I said, "No, coz you and him just ruined my fine and sunny day. Plus your boobs are small. I don't talk to people with small boobs. Speak to my hand."

The guy seems to have extinguished the fire when we both turned to look at him. One uncle had poured a can of Jia jia Herbal Tea on his head mumbling something about how vile that concoction is. The bf seems at peace with himself and was curiously touching his hair with his index finger gently.

"Look darling!", he addressed the girl, not looking at her but checking out his reflection on the bus window. "Afro hair!!"

The TV Mobile screen flashed Fann Wong's previous appearances during past Star Awards including the year where she wore green shorts and had the exact same hair the BF has. I exploded into laughter. (no offence to Idris whatsoever.)

"OMG I am so happy you are fine!!!", said the girl. A guy at the back of the bus started to play a sad tune on his violin.

She rushed over to him, all filled with tears and stuff, and smooched him on his lips, despite it having bits of burnt hair on it.

I set fire to his hair again.

It is a fine, sunny day afterall.