Showing posts from February, 2004
Show all
- February 22, 2004
Just a few news coz I have a test tomorrow and I've gotta study for it... 1) I'm pregnant, help me think of a name for my baby. Kidding. 1) Anyone knows where to buy Preparation H? Kidding. 1) Ok I'm serious now. I'm on the centerfold of the Newpaper if you managed to get your hands on one. More about that when I have the time. But anyway my butt looks fat in that picture (believe me it is alot nicer than what it appears to be ok!) and I look absolutely horrid. I need photoshop. I am dying without photoshop. And a PC for that matter. 2) I got my first interview with RSI, a chinese radio station which runs by Shortwaves, which means it reaches out more to a regional audience rather than merely Singaporean. You can hear my voice (speaking in crisp Mandarin!) if you wanna... This interview is merely for myself, as a blogger, and nothing to do with the Singtel competition. As soon as I know the date I would let you know! Sincerest (if there is such a wo
Read more
- February 18, 2004 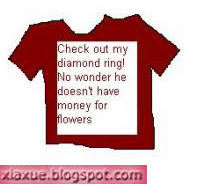 Its Valentine's Day once again, the stupid day where men spend so much to pay to florists who are sniggering behind their backs. Juts a thought: If you are a flowery florist, should your date buy flowers from you to give to you? If he does (I am assuming that most florists are females), isn't it irritating that u would have to wrap your own flowers?? If he does not, do you feel betrayed that he is giving business to other people?? Wahahahahaha... LOL I'm not gonna blog much coz I'm using my friend's laptop and I hate typing on laptops. So anyway, what did YOU do this V Day for your loved ones?? I excitedly shaved my pubes into a heart shape and dyed it pink merrily, and then realised that no one's looking. So I dejectedly went to a bar to look for other singles so that the dye job doesn't go to waste. Alas... All the bleach corroded my skin and it is now inflamed with little cauliflower-like growths, thus scaring the shit out of the French man (You
Read more
- February 18, 2004
Terrrrrrrific news people!! MY COM IS DOWN!!!! *stunned silence* CONGRATULATIONS!!! AND CELEBRATIONS!! So no blogging. If you expect me to apologize for the inconvenience caused, don't. Coz I am dying without a com myself!
Read more
- February 15, 2004
There will be a launch party for Singtel's my dreamd8's finalists, and it will be on thursday at a club... Free entry and drinks, IF you make banners for me!!!! Lalala!!! Send me an email asap if you wanna go.. You don't need to even talk to me if you don't wanna, but if you wanna come pump my hand and say you love my blog, I'm more than happy!! Hahahaha!! Alright, do send me an email if you wanna go!!
Read more
- February 13, 2004 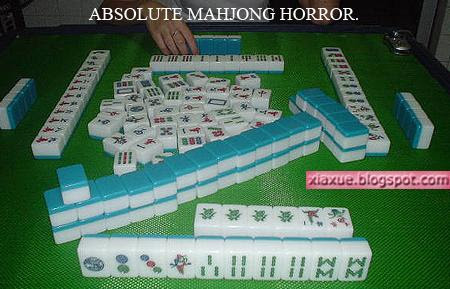 (The front part where I posted photos of SR's uncle's magnificent house is is deleted because the said uncle didn't like it. Tsk tsk, this popularity thing is freaking irritating me, I can't even post such harmless stuff. Knn. So yeah, if you are an avid reader you would have seen it. If you are not, too bad la. Here's the second part anyway.) BTW I won $20 in mahjong there. Yaaay! Speaking of Mahjong!! I experienced the worst EVER scenerio in mahjong. Alright, for people who have like no idea how mahjong is played, it is basically like this: Tiles are split into 4 kinds, The bamboos, The numbers, and the circles. The fourth are the etc tiles, which are pretty much irritating anyway. In order to win, you must have all your tiles in sequence in sets of threes (eg 5,6,7 circles), or having 3 of the same kind, commonly known as a "PONG" (3,3,3 bamboos), and together with a pair (5, 5 number). EG: You have 1,2,3 bamboo. 4, 5 circ
Read more
- February 11, 2004
So far out of 125 people who read my blog, 16 of them are amoebas and 5 of which are gay amoebas. WTF IS WRONG WITH YOU PEOPLE?!
Read more
- February 11, 2004 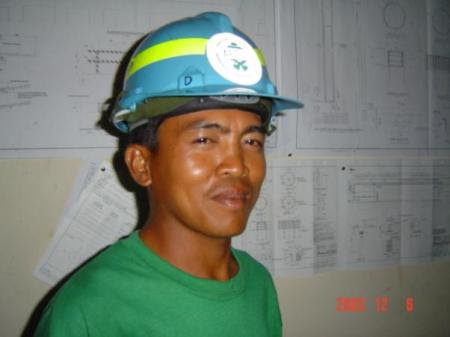 June sent me this via email... Its a picture of a foreign worker.... Just a thought.. Have you realised that there are no fat bangalas?? This goes to show that with hard work and no money to buy good food, there's a thin bangala inside everyone wanting to climb outta those fats. Alright, now to the picture of the really cute foreign worker: Ladies and Gentlemen.... I present to you.... Jian gui le!!! WELCOME TO THE GUESS SHOW!!!! WAHAHAHAHAHAHAHAHAHAHAHAHHAHAHAHAHHAHAHA!!! I almost laughed my placenta out. If you don't know whats so funny, you should watch more taiwan variety shows, baby... Oh yeah btw. IS MY NEW TEMPLATE FREAKING NICE, OR WHAT?? I luuuuve it!
Read more
- February 05, 2004
When I was younger, someone posted this question to me. She asked, "Wendy, what do you think is the most beautiful thing on Earth?" At that point of time, I realised that I cannot give her my answer because there are so many different beautiful things, such as the sea, such as the rainbow, etc. I can't make up my mind. I asked many people this question, and the most common answers are invariably the sea and the sky. WHY! Blue stuff are ugly. I hate blue. I asked my mum and she said its diamonds. One guy gave me a sweet answer: "Women." June said its herself. I'm kidding. But anyway, as I get older, I realised what my answer would be. It is an orgasm. An orgasm is so beautiful because of so many reasons. It is the most powerful (or maybe sensational) form of love, it is also mostly rare for women (Bloody selfish men!), and it is one thing that has almost no bad side effects! Most of the time it is free too. Orgasms fill pe
Read more
- February 02, 2004
Oh no the spoof has been updated!! Please don't read it!! Eddy is EVIL!!! The spoof! Oh it ruins my life! Some people hate me!!! BTW there are some pretty smart spammers writing on the tagboard, so anything that sounds ridiculous is not by me. I'm keeping the taggie there in case blogger fucks up on me again and thats the only way I can edit the site. (Oh yeah to those dumbos who still don't get it, the SPOOF IS WRITTEN ENTIRELY BY ME . Yes, gasp all you want. I think its pretty well done. I laugh everytime I read it myself.)
Read more
More posts