I'm like freaking tired after shopping with Eileen (followed by Marche!), so I think I shall not blog.

Instead, I have some pictures that I did edited... Bah. 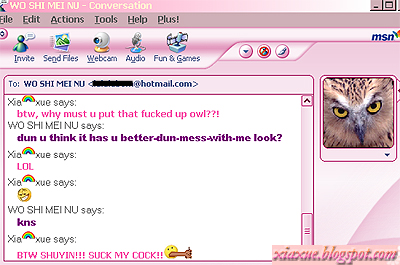 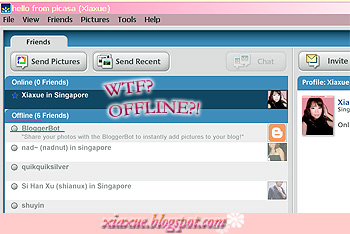 Hello, Blogger's partner who is kindly hosting the pictures, does not seem to be working very well... Its bot went offline!!! 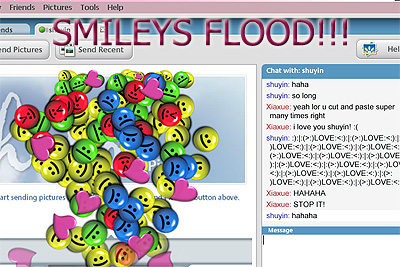 But look! The program allows "falling" smileys!! Darn cute! And you can actually flood them like Shuyin did! 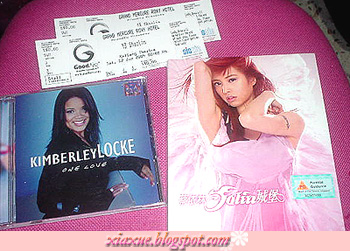 Why my job rules. 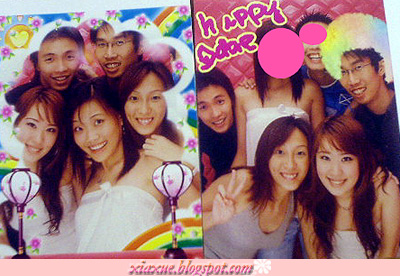 Common stupid person 1:
"Oh Xiaxue, you are so MEAN to critisize Sandy Chua!!! You are a meanie!"

First off, before you open your big fat mouth, READ carefully. I did not critisize her. I critisized HER PICTURE. I said, that's a awful PICTURE! Should I repeat that one last time for stupid people?

Sandy Chua has a bad PICTURE - she is not ugly!

Common stupid person 2:
"Would you like others to do it to you too? Think about her feelings!!"

I did not enter a fucking BEAUTY contest, which if I did, would symbolise that I think I look good. If I think I look good, you can argue with me and say that I don't look good. However, since I have never said I look good (the profile About Me part is a JOKE), I don't think I deserve being called names for my looks since there is nothing to argue for. Thus, "others" doing it to me instead of Chua would be less justified.

But in any case, I will accept constructive criticism anyway. If Sandy wants to photoshop my ugly photos, I will readily listen to her tick away about what went wrong.

To add, since Chua entered a fucking beauty contest, she must be prepared to be critisized. Else, go live a normal, non beauty-contestant life like everyone else.

Common stupid person 3:
"You think you damn pretty meh? You so pretty, you go join la! If you not pretty, then what rights do you have to critisize her?"

This one is the dumbest of all. It is basically saying, if you are fat, you are not allowed to say another person is fat.

Even if I am fat, I have all rights to say another is fat because being fat does not affect my correct judgement of what is fat.

If only pretty people are supposed to judge that others' looks, then the judges for Miss Universe can only be judged by previous Miss Universe winners. WHICH, may sound like an actuall feasible idea - until you realise that no one will judge the first Miss Universe pageant. Duh.

But then again, I do agree. Imagine this fat guy telling another fat guy that he's fat. Pretty stupid right?

But now, imagine this: A fat guy joins a Slim&Fit contest. Now, can the other fat guy say "Siao, he so fat, he join this sort of contest for what?!"

You get me don't you?

Since we are on the topic of fat - I think no one should be fat in the cyberworld. Lookie what photoshop did for Miss Malaysia: 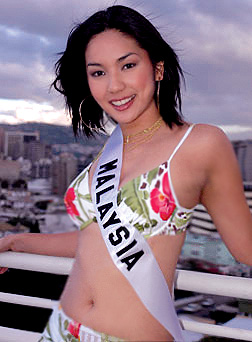 It could go supermodel thin but I left her some baby fats...

HUH? Did I hear something about not trusting slimming ads?

Oh yeah. You possibly should read these two as well!!