THIS BLOG POST IS TARGETED AT ALL GUYS, AND NO ONE IN PARTICULAR

Blogged on my Clie some time ago: 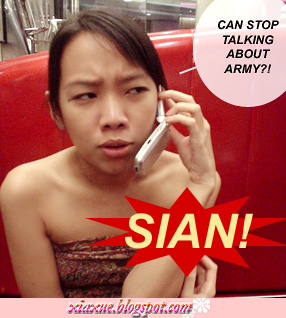 Shuyin gets traumatized by Chua's ranting about army stuff


I mean, I understand, camp's all you guys have now. No wait, i dont understand. While these nationally slaved men are constantly whining about how army's really a torture, they seem to take extreme relish in conversing with fellow torturees about the army torments - which are no doubt so traumatizing they should talk endlessly about it over the weekend to repeatedly remind themselves they are in a shithole for the next two years.

I say, ZIP IT ALREADY.

Beautiful Saturday afternoon, three recruits with 2 or 3 girls in an outing with them.


A: Hey, Pegasus' bunk there got green fungus growing on the edge of the door or not?

B: Siao! Cheebye! (dont know why recruits love vulgarities. Nearby, a girl grimaces as her privates [parts, not the rank] get mentioned but B ignores her) of course have lah! The fungi grow like fungi like that. Don't know why the door's edge everytime got fungi.

C: Chun boh? My officer kao peh so much, make us do pumping. Down 1,000, siao, think we super hero. After that must do 65 click somemore.

A: Is it! Then I lucky la, mine only make us do burpees.

All guys: *ignore* *gives each other "They don't know one lah" look*


See? No ones interested in whether your small inhumane bunk with your mosquito infested door has green fungus! Of course, that conversation was thoroughly made up by me, but its generally in that template.

What the fuck is a confinement and how does it work anyway??! No wait, i dont care.

Thats not the point! The point is, its perfectly fine if you army guys want to talk about army to each other. No one's stopping you.

Well, just dont do it when we girls are around! Thanks. We're really not interested to listen. Of course, out of politesness we absorb in a little about how your sir made you scrub the toilet floor while marching you to the canteen while u get confinement but deep inside, there's a limit and when it's used up, we dont give a shit, coz we can't relate to it. It's perfectly fine to listen a little, but I DONT UNDERSTAND WHY GUYS HAVE TO GO ON AND ON AND ON!!! Drone drone drone ... (not unlike how I am droning now too)

After they finish talking about how much longer they are going to get shit pay and shit food, they start talking about cars - which unless i'm very much mistaken, very few girls are interested in as well. I don't mean like whether the "volks beetle is nicer or the jag" kinda conversations, i mean deep and boring discussion about which car - could it be the nissan skyline? - has the loudest and most powerful engine ever.

I could go on into a very long digression about how I don't understand why guys are so into cars, but I am late for meeting Ben (with the Aussie dreamdates), so you got lucky.

When we girls are with you guys, we do not chatter on and on about make up, or how our menstruation blood is a different colour this month and how we spend SIX FUCKING YEARS OF OUR LIFE BLEEDING AND WHEN WE BLEED WE GET SHIT FOOD AND SHIT PAY, or how our nail art just came off boohoohoo, or a deep discussion about which epilator is the loudest and most powerful and seems to be able to pull even the toughest ingrown armpit hair, or what colour scrunchies we like, or our week's DIET PLAN to have a grapefruit a day, or other stuff that guys don't understand nor are interested in right?

So would you all shut up about army and cars already? We were only pretending to be interested. How about talking about the weather for a change? At least the weather doesnt have stupid terms in it like burpees, which we do not understand. Tekong is subjected to weather too right? Or maybe bitching about your bunkmate's penis size. That would be fun to talk about? Not the fungus at the door, or CONFINEMENT.

Do not ask me to understand - coz I don't. I'm not being self-centred here. It's just like if guys go out with girls, I think it's very mean if the girls pull the guys to do girl shopping. It's crappy and selfish and I don't do that. The GUYS ARE NOT INTERESTED IN SHOPPING FOR BRAS RIGHT?! Conversely, the guys shouldn't be inconsiderate and traumatize the girls with army talk too.

"THEN DON'T GO OUT WITH THEM LAH! ARMY IS ALL THEY HAVE, OF COURSE THEY WILL TALK ABOUT IT." 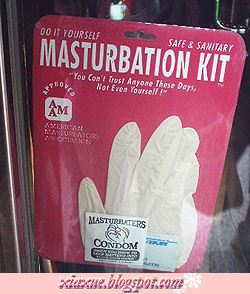 Any comment with guys disagreeing with me shall be deleted without mercy. You inconsiderate boys. Manners, recruits, manners. Don't make your girlfriends all so pissed, they refuse to meet you forever - and there you have it, your only friends will be your bunkmates and you can talk about burpees all you want.

And btw, whats with the stupid CLICK word to replace KM? 2.4km say 2.4km lah, act cheam say 2.4 click for what. No wait, I'm not interested to know.