It's Sad Times We Live In

If u watched Around The World in Eighty days, you would have noticed that the cute scientist was chided for inventing stuff because the senior scientist said that it was a Golden Era they lived in, where everything that is supposed to be invented has already been invented.

And that was much much earlier we are talking about, where there are no computers, no electricity, etc. We know now, for a sure thing, that that scientist was obviously talking bollocks, since many things have been invented after his little speech, including toasters and other useless what's-nots.

How about now? Is it true now then? Since we have machines to capture sound, and sight (and they are selling very well), it leaves machines which capture smells, and touch and maybe taste? The cyberworld possibly has lots of space for exploration too.

Digression to traumatize you: Speaking of good movie quotes, one of King Arthur's knights described his penis as being like a baby's arm holding an apple. He also had 12 children - and many many years later, one of these children passed on his father's good genes to Chua Idris who is perhaps only slightly inferior. A skinny baby's arm holding a chestnut, I assume. (remind me to ask Shuyin to verify this)

Back to the topic at baby's arms (it's supposed to be a clever pun on "hand", dum dum).

One day, it suddenly struck me that sexuality is a conditioned response. You might think its nothing amazing, but for me, its a sudden stroke of brilliance because i just realised it.

Just to perhaps aid you understand what I am yodelling about, this happened during a science class in Primary five:

My teacher, Mrs Seetoh, was going through test answers with us. She stopped at a question which a major part of the class answered wrongly.

In the following diagram, a beaker with was placed in evenly distributed rain for 1 minute. After 1 minute, the diagram shows the amount of rain water collected. 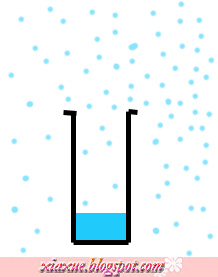 The beaker was replaced with a smaller one later on. Assuming the rainfall is still the same, what would the smaller beaker look like after one minute? 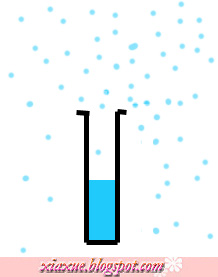 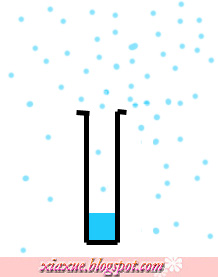 I don't know why, but there I was, top student of my class, raising my hand confidently to say that it is A. Obviously the water would be more because the volume of the beaker is less what!

Looking around, almost every kid had their hands raised at A too. Mrs Seetoh must have been wrong.

She asked one of the five or so students who thought the answer was B to explain.

The fellow mumbled something about not knowing why, and Mrs Seetoh, exasperasted, tried to tell us that why. I didn't understand what she was talking about. BUT SUDDENLY IT HIT ME! It must have been B! How could it be A? It's just ... wrong! I don't know why, but I just could understand now.

Being much more able to express myself at this age, I can confidently say it's due to a reduction in surface area (however, why the level will be exactly the same as the bigger beaker is still a mystery to me), but when I was younger, I managed to grasp it without words.

Now, to me, i'm brilliant because i thought of it. Now unlike how you would be amazed at the fact that you suddenly learnt how to balance on a bicycle and think you are the smartest thing on Earth. I was very pleasantly surprised when I finally got the answer to my question of why some people are very gay.

However, later on I realised my argument is flawed, because a gay guy is possibly not interested fucking in Pamela Anderson. To him, perhaps screwing an average looking guy would be a greater pleasure.

Why are some people gay? It's a conditioned response of our bodies.

To explain to people who don't know what a conditioned response is, the usual analogy is this: You ring a bell whenever u feed your dog a bone, and after years of repeating the practice, whenever you ring the bell, the dog will salivate.

To me, I am straight, because I know that penises can give me pleasure. What if one day, I realised that, say, breasts can also give me pleasure? Whenever I see breasts, wouldn't I get aroused?

Take for example when we were kids. I don't know about the guys, but frankly speaking, I would rather kiss my best girl friend than one of those smelly guys.

When I was 12, and my cousin informed me what oral sex was about, I was frankly about to puke my prepubescent lungs out. WHAT THE? WHY WOULD ANYONE AGREE TO PUT A FILTHY DICK INTO HER MOUTH?! Why would anyone even think of doing such a disgusting thing?

But now, oral sex is ok, because I am conditioned to associate it with pleasure.

However, now I still think that oral sex done on a female is disgusting (for me to perform it that is), because it is not associated with pleasure.

I am lazy to further explain myself. In short, attraction was possibly due to a conditioned response. In other words, I do not believe that a perference for any gender lies imbued in us the moment we are born. Until a gay guy has tried sex with a pretty female (my aesthetic theory still stands ok!) and can positively say that he felt no pleasure, then he can say that he is truely gay.

P/s: You would notice that I did not once mention love because I am talking about mere attraction here.

However, when i told shianux, who is a wide reader, he said i'm not brilliant at all, because this topic has been thoroughly discussed before by our ancestors.

I did not for a moment think that I am alone in this world with that theory of mine of course, but neither did I think that it was, ah, so common. :(

Let me also quote Scott Adams, the author of Dilbert comics and one of my favourite writers.

He said it suddenly hit him:

We are all so convinced that there is gravity on this Earth. What if Newton was wrong?

Now, this theory of his IS flawed (why do things stay on the ground instead of floating away? why would we die if we jumped off a building? how come humans still grow if we are "expanding"?), but it is still a stroke of brilliance to come up with something like that.

After he published this warped theory on his books, thousands of mail came in to tell him he is a despicable rip-off from this physicist (how to spell?) who thought of this theory long ago, complete with complicated diagrams (instead of an illustration Adams made with Dilbert standing on an expanding Earth), mind you.

Now, is Adams any less brilliant than the physicist who thought of that?

Am I any less brilliant than the person who thought of the conditioned theory?

Possibly not, since i possibly thought of it earlier than that person considering my age.

Just because these people were born earlier! =(

I just think its pretty saddening to live in such advanced times. Just imagine, there could have been many many Edisons around us - if only the lightbulb was not already discovered.

"Look Bob! I made this thing on the element tungstun! It lights up if you put it in a vacuum, look! We could finally be freed from using annoying kerosene lamps which stinks and extinguishes itself especially when you are having sex! Wow! I am a genius!'

"Well i'm sorry Michaelangelo, but you are not a genius. Someone called Thomas Edison already made it, and his came with different designs too! His bestselling includes the ZEN Lightie Bulbie, and the Mimimalistic Lights. I suppose all those ten years u were doing research in your lonely study, omg you have a beard already?, u didnt read the papers? He is deaf too, reporters are going mad interviewing him because they have to learn sign languages. How cool is that?"

'You dont say!!!! NOOOOOOOOOO!! This cant be happening! All my years and years of hard work!'

'Well it happened. Suddenly, you are no longer a genius. Too bad u were born too late then. Bye. I'm getting for myself the tiger stiped bulb, it's real cool."

*Nearby, someone mutters: "Another mad scientist, none of them as brilliant as Edison but die trying anyway."*