Today is an eventful day.

Being a *wealthy unemployed individual, I typically spend my late nights at extremely vogue places such as ... erm, I don't know ... Lawry's? and erm, Attica and Thumpers and what's not.

I don't usually stay at home and watch MediaCorp shows, thank you. No sire, I am no loser!

However, today I have decided to stay at home and show some appreciation to our local artistes. My my, I am a pleasant girl, I am. =)

Being the *deep-thinking intellectual I am, I sat in front of my telly, contemplating certain important issues before setting out to watch the 9 o'clock show - The Champion, starring the voluptuous Fiona Xie, no-breasted Jeanette Aw, and cute Toro Tan (I don't know Toro's surname so I anyhow buang). Notice I did not mention the MPV qing ren guy, because he is not cute and undeserving of my attention.

Zoe Tay is getting old, isn't she? 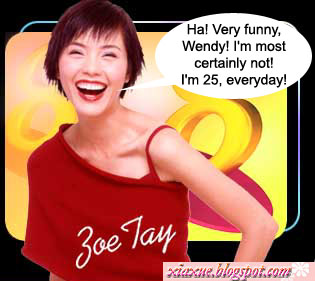 
And how about our Caldecott princess?

Is she getting old too? 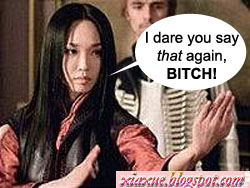 WOAH! I didn't say nothing, Fann! Please don't slap me with your silky rebonded hair!

So anyway, before Fann so rudely threatened me, I was thinking deep thoughts to myself about how our Ah Jies are getting so old, THEY ALMOST CAME IN THE SAME BOAT AS SANG NILA UTAMA!

Alas. What do we Singaporeans do?

(I had this sudden thought because I was listening to the radio playing Jay Chou's Jie Kou and I thought Harry Potter's Victor Krum must look like Jay Chou because Jay is also sullen with black hair and I imagine him to walk in a duck-footed manner. (Hermione and Jay Chou!)

We have the new Ah Jies coming up! 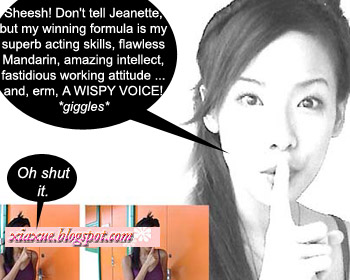 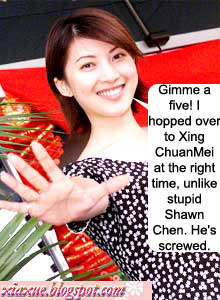 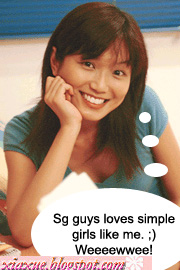 Or Joanne Peh?
(Yes I noticed that there is a gross grammar error there. Forgive me.)

Oh my oh my am I supposed to choose one of them to be the top Ah Jie in Singapore? My word, they are so over-qualified that I am flustered out of a sudden!

Should I choose the cutesy Fiona Xie?

I imagine, if Fiona were to represent Singapore in Hollywood ala Fann, she would amaze the A-list celebrities there with her Wisp-speak.

That's right! Fiona speaks in a language of her own, called Wisp-speak.

(If you put a Babelfish into your ear PLUS tilt your head a little to your right, you can understand her clearly. To the rest of us normal beings, we merely hear wispy soft whispers spoken in a consistently cute pitch.)

That's like when Tokkien invented a language of his own; coolness! It's ok you don't understand her and frown a little at her lines, because her marvellous handling of the Chinese language complete with pinpoint pronounciation is bound to wow you over. =)

Also, unlike Fann and Zoe who have mediocre-sized titties, Fiona's blossoming assets is all set to impress (and tease). I am Soooooooo excited, I am about to watch my first episode of The Champion! (Are you watching it too?)

Or should I choose the formidable Jeanette Aw, whom, after a ridiculously advantageous virgin (in all senses! *guffaw*) acting role in Holland Village, manage to transform that slightly ... erm ... 'slow' (read: retarded) and child-like image of hers to fit whatever roles needed of her then after?

It's like watching Mo Jing Jing grow up overnight! Amazing!

Pity her voice remained the same.

Or maybe ... Joanne Peh, who looked so pretty on that 8 days cover in a bathtub?


I AM SPOILT FOR CHOICE! Who wouldn't be?

I am very sure that the future Ah Jies in Singapore will be of improved calibre, as compared to our current ones. After all, look at all the classic shows that these three lovely actresses did, which greatly surpassed Fann's "Yang Guang Lie Che" and Zoe's classics: "San mian xia wa" and The Unbeatables!

I shall turn on the TV! 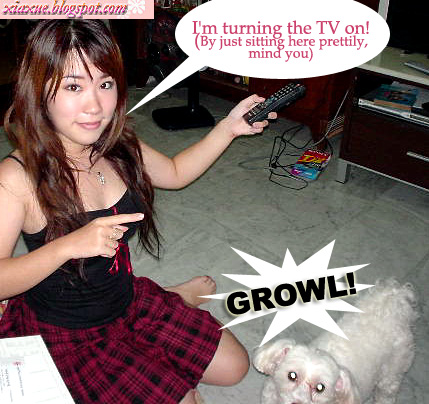 That was me turning the TV on.

Fiona Xie and Toro Tan are in love. And then Toro Tan chases after a bus which Wispy Fiona is sitting in.

She ignores him while he runs, a la Meteor Garden.

Children, this is the word for the day: PREDICTABILITY! Meaning explained as follows:

Stops, dejected, to take a breather - while panting heavily of course.


Wispy Fiona appears! Wow, shock-of-the-year, she actually decided to get off the bus! She looks at him with luuuuuuve, and offers a TISSUE!

They then admit their love for each other ... 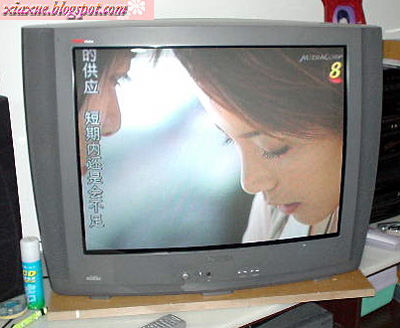 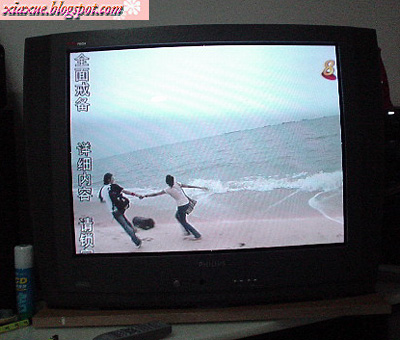 The beach! And of course! Of all other activities to do on the beach, they choose to RUN ALONG THE BEACH, unlike other MediaCorp TV shows.

Wow. So fresh, the script ideas. I was so surprised by the chain of events that I dropped my remote control in a stunned silence and it hit Cloudy, who was watching the show with me. 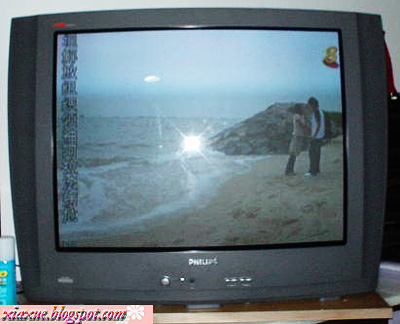 Later on in the show:
(Disclaimer: Fabricated by MOI. None of the following is true)


Mei mei comes to Daddy's store after gambolling around the beach with Toro Tan. Brother is around. 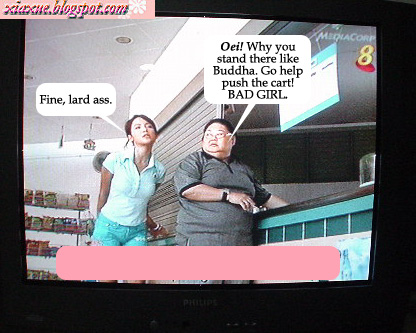 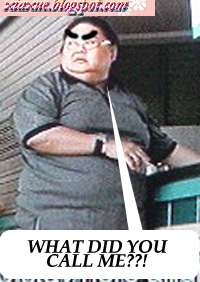 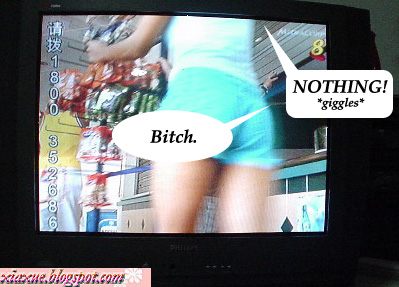 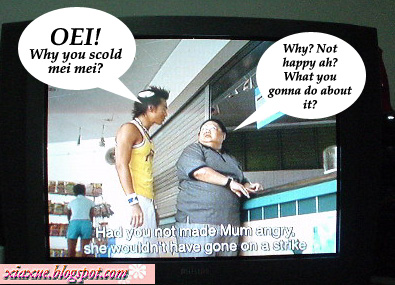 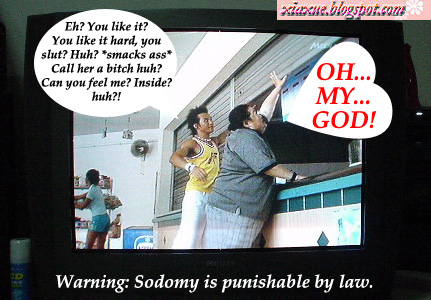 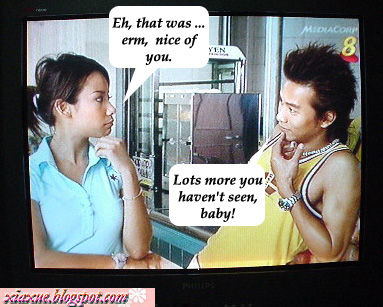 I cannot stand it.

Don't ask me why the fifth photo turned out like that. I don't know. It think it is evil forces.

After that scene of obscene sexuality, the show went into a boring downturn.

Cloudy, my faithful pet, was watching the show by my side. My readers! Do you know that Cloudy is an ah beng dog? He calls himself Lim peh - which I find pretty rude since my dad is most certainly not canine.

He ... looks bored. I wonder what's going on in his little fluffy mind.

Author's Note: If you are anybody (I insulted)'s fan, go ahead and send your hatemail to xiaxue@gmail.com.

If you are Moses Lim ... Well I'm sorry for drawing your brows so hideously. As for the sodomy pic - well I couldn't let it go. Too funnnnnny BUAWAHAHAHHAHA