Skip to main content
- October 11, 2004
It is getting harder and harder to open Blogger as my posts increase. Which is quite steadily, needless to say? And that is very irritating.

Right now as I blog this entry on Wordpad, the screen behind the wordpad shows a page which cannot be displayed, otherwise known as Blogger.com.

I actually wanted to blog about something today.

I told a close friend of mine about that particular blog topic.

That topic, in short, is about this girl's blog which went into great, graphic details about her bikini wax. One's impression, after reading (a lengthy deal about) it, is a very vivid virtual image of her raw, hairless cheebye, which is, needless to say, pretty horrific to readers - female readers at least. Now say "pubes" in my face, and her would-be genitals zoom in to my mind's eye. It even appears slightly wet.

Or maybe it is just me with a very wild imagination.

Now as I say this: "She violently coughed out one of her lungs and it was pulsating with blood and gooey translucent liquids." and you imagine the scene in your mind?

I do, whenever I read such stuff.

So my blog topic, which I decided to clear with particular friend before embarking on, is about blog etiquette (not that I am in the position to lecture anyone - but I wouldn't let that small detail stop me). I think girls should refrain from talking about such personal details about their anatomy, menstruation and sex life like everyone thinks they are sexy (meaning writing sexual stuff purely for the sake of MALE readers. Yuck.) unless they happen to be making a joke, because everything is forgiven since laughter is the best medicine.

Cmon. Stop deluding yourselves, guys! Open your mouth. Now insert a doorknob in it. Lick and suck it for the next 15 minutes. Like it? At least the doorknob is was not once dripping with urine and sweat, love.

Why not write like that? Because it accidentally grosses the reader out, the same sex readers anyway. =(

My POV aside, my friend chided me (not, he assured, because the bikini wax girl I mentioned was his, erm, gf) in a fierce way which quite startled me.

He said that he constantly defends me from my detractors because he thinks that writers should have the freedom to write whatever they want. The theory holds, he hollered through MSN (I could feel it), that "if you don't like what you read, don't read it!"

He further illustrated that I would turn into another re-minisce or metastasis if I do write that (now non-existent) blog entry. I cannot have him defend him and then turn around and do the same thing as those (narrow minded) people did.

It is, and will be, a personal decision where no one can make but you.


So you missed a B.F! (Thats BITCHING FIT for you)Ha ha. I just learnt that term from White Chicks. Quite a funny show.

Ok yes you caught the contradiction I already bitched quite a bit.

I went with Eileen to the flea market at Clarke Quay today, and all I bought is ... 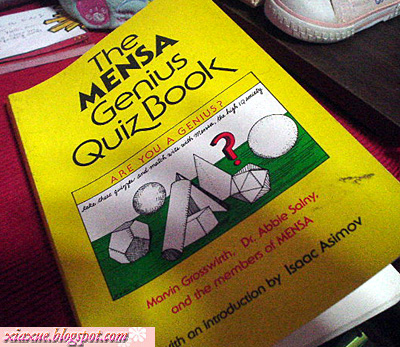 Being a future Mensan myself, the Mensa title caught my eye. I took the book up (I usually only like green books), contemplated buying it to practice for my coming (or not, depending on my results) Mensa IQ test and put it down again. This is because I decided that I am clearly such a genius that I do not need external help from silly Mensa professors (which after I pass the test I will regard as EQUALS, buahahaha).

The auntie selling the book, seemingly non-Mensa material, picked up the book with amazingly agility for her age and thrust it at my chest. She then said I look as dense as mercury and I need as much help as I can for my coming test.

"How did you know I have a test Auntie?" I quipped, somewhat amazed.

She then took out a crystal ball out of nowhere. The crystal ball is green and aglow with sparkling, erm, bits. She looked into it then predicted that I will blog tonight.

Which I did! HOW IMPRESSIVE!

Actually the auntie took the book and told me it is $1, would I like to take it?

Speaking of "sure...", I started to use this term after I learnt it from someone. Because I assured that Someone that nothing about him will appear on this blog, I shall have to say that the someone I am talking about is very old and just died yesterday of a stomach ulcur which slowly gobbled up his ancient but wisely-lived life. He therefore does not exist.

I realised that "sure..." can sound extremely irritating if you keep saying it in an extremely arrogant and patronizing tone whenever someone asks you something. I have been steadily losing friends these few months because they all cannot stand me saying "sure".

Sit back on your chair in a slightly bored manner, like you own the world and no ONE IS SUPERIOR TO YOU. You are therefore relaxed and happy because the view from the top is comforting, albeit lonely. Tilt your chin up. You are ready!

Person: "Hey Xiaxue can you help me with some photoshop? You barely know me but you wouldn't charge me right?"

Person: "Really? Can I pass you like all the 132 photos I took at Sentosa? Get rid of my underbite will you, and make my dog less fluffy."

Person: "Hey Xiaxue I emailed you my pictures, got them?"

Person: "Then can you send them back to me?"

Person: "Hey there is no difference leh, how? Can you photoshop them for me again, this time stronger?"

*repeat process till Person gets the meaning THAT I DO NOT DO FREE PHOTOSHOP FOR PEOPLE WHO ARE NOT MY FRIENDS, SUCKER!*

I wanted to say that I went to the flea market and only bought two books. The other book, in stark contrast to the Mensa one (hey I have finished all the puzzles before I blog this now at 4.44am! Alas, the irregular hours of unemployment) is .... 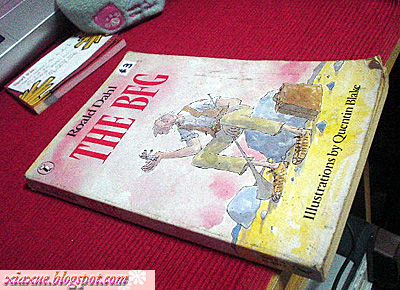 Yay! One of my favourite childhood books! I, erm, am not so juvenile ok! I, er, bought the book for ... for ... yes! my brother! Who else would read such childish books?

Oh yeah, let's put Weili at the end of this boring blog entry. 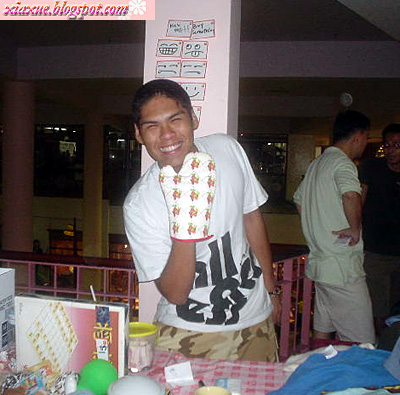 That's him in front of his store in the flea market! That bugger happened to be there selling stuff too (including the oven glove, yes)! He earned $80 and said it is not worth his time. $80 is ok, what! So greedy, hor?

p/s: Dyeing my hair today! Take pictures show everyone later because I am a mei nu and everyone loves me. =)