Will someone just buy me those jeans!

Those of you at Zouk! Now is possibly about the time you are waiting for that cab home, after some funky dancing and having the time of your life in skimpy glamourous clothing, AND SERVE YOU RIGHT FOR HAVING A LIFE IT IS POURING CAT AND DONKEYS! HA HA HA HA HA!

Whilst (notice I used whilst while I could have used while) I am at home, smug and comfy, thinking about how you are so cold and wet. And possibly shagging someone you picked up from the from the club. WITH SYPHILLIS!

Actually, I had a relatively eventful day today.

First off, I met up with the producer of Get Rea!, and had a nice long chat with him. Actually, don't you think that after meeting a bout of people whom you are very superficial to(uninteresting small talk and so on), you will finally meet someone who communicates on the same wavelength as you, and then you feel deeply gratified that you are not alone in the world?

Well Mr. Producer was one of those people. Nice. =) It's been long since I last found someone with a sense of humour similar to mine.

So anyway, better stop licking his boots or people might think I did that to get on Get Rea!. HA HA HA Yes they are interviewing me!! So fun right?

Back to my interesting Friday. After meeting Mr Producer, I met Eileen, who wanted to, erm, introduce this cute guy to me.

The first thing she did when she saw me was to inform me that my bag is hideous. I waved her comments off in a "I am superior to you and I don't need your fashion advice, bitch" manner.

And it finally occured to me that it is indeed fugly.

I would like to show you a picture of it but I am afraid you will turn into stone a la Medusa. That is how ugly is it. So here's a vivid desciption. It is deep red, made of velvet and sewn from a red piece of cloth and two straps by my mother.

So, because I am supposed to meet a cute guy later, I had to get rid of the bag. And I bought this on impulse. 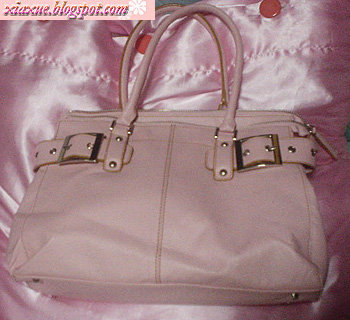 Not very pretty either, but the ugliness of the bag grew so much on me that I CANNOT STAND IT ANYMORE!

Outside my house got lightning. =(


I suddenly decided I got no mood to continue blogging, so I shall just end here with some pictures of my ass.

Speaking of ass, isn't it very sad to have something which is very nice, but does not see daylight?

I mean seriously, if I were to have a very nice nose, which I will have after my plastic surgery (which is after I get employed), I assume that strangers walking pass me would go like, "Miss, you have a very nice nose!" and I would be like, "Whoop! Hell yeah!" and then proceed to rub my straight nose bridge a little and decide to myself it is worth it to have a nice nose - since people can see it.

What about if I have very nice breasts (which since you can't see it I shall say I do!)? Can I tell my crush, "Hey look here darling! *flash breasts* Nice?"

And he proceeds to fall deeply in love with me because of my blossoming assets. We live happily ever after.

I cannot do that! Because I just can't! How exasperating!

What about men with very long members?

Can they tell their crush, "Hey girl, wanna have sex with me? My dick is like damn long!" The girl will look at him with disgust and never can he ever expect to touch her with a ten inch, I mean, ten foot, pole.

I expect this is the reason why people flash. Flash as in show strangers their genitals. Because they feel very exasperated that such well endowed assets are not flaunted to the world in their full glory.

I had this Thai worker who flashed at me once when I was waiting for my lift. I think I related this story before but let's do it again.

So, it was 11pm. I was waiting outside my lift with this young Thai worker guy.

While the lift was taking a long time to arrive, he left the waiting area to go to the back of the lift. This is where, I assume, he went to get himself erected.

The lift arrived, and he was not back yet. The naive me thought he had gone to take his letters, but I sort of forgot he was waiting for the lift too. I entered the lift and pressed 'close'.

Then I heard his urgent footsteps approaching.

Being the nice, considerate girl I am, I opened the lift door for him to come in, when it was already almost 90% closed.

He stood outside the lift, pulled out his dick from his shorts, and amazingly at the same time stuck out his tongue at me. In a rather playful manner. And then while I frantically pressed door close, sprinted away.

Now whenever I relate this story, there would be a few typical reactions.

1) Laugh at the size of his small genitals lah, Wendy!

I cannot do that, because it is like 9 inches long. I am not kidding. If you cut him off at the knees, you can call him a tripod. It is nothing to laugh at.

Besides, he could easily have a knife in his pocket, so don't do things like that, please, girls. Don't be childish.

It is fucking scary. It doesn't matter if the fellow has a long dick or a flaccid one. It is not a matter to joke about. At all.

Why are some guys so fuck-insensitive? Just because they get all excited when they see the female genitalia doesn't mean females react the same manner when they see the male version. In fact, we react pretty much opposite (when it is not our bf's or husband's or willing partners'). For obvious reasons. Duh.

Thank goodness, the third reaction (from men) would be ...

"Aiyoh, so dangerous! I shall send you to your doorstep next time lah."

Nice. This is how I would teach my son to behave in future to girls.

Where was I? Pictures of ass yes. 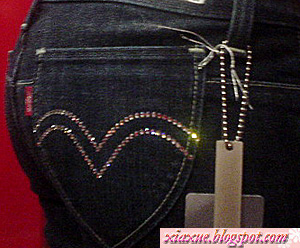 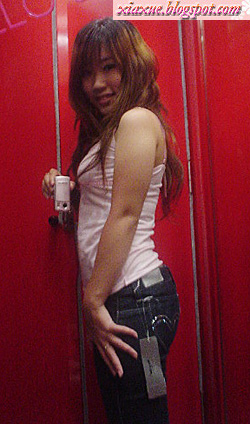 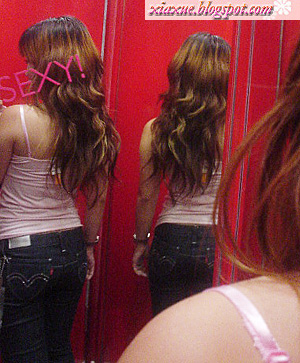 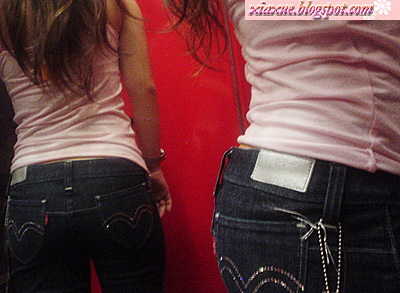 Can someone please buy me this pair of Levi's jeans??! I am so infatuated with it! It is so damn lovely!!! Look at all the nice nice diamantes! (Isn't it girls?!?! Pictures taken at the Levi's girls' store in Lido where Future State used to be)

Almost 200 bucks for a pair of jeans is ridiculous, unless u are so rich you drive a Bentley! In which if you do, you should really share your wealth with the poor sometimes! Surely a young girl's happiness is worthy of some small change to you?

If you buy it for me I will love you forever. Pretty please?

(No I am not soliciting for sex you perverts go wank to your sister's cheerleading pictures.)

I SHALL WORK HARD AND BUY THE JEANS MYSELF! HMPF. I must jia you!!! =)