Whyyyyyyy??? Wooola! *snaps fingers* I shall join MLM and sell magnetic mattresses! I shall ask all my blog readers to buy them! (Kidding) I wanna be RICH! One baby step at a time. The first thing I wanna buy when I become rich is ... an aircon.

Apparently I REALLY need an aircon.

I am very sorry to announce that from now on, the beloved Diana Ser will no longer be hosting Get Rea!. That is because the entire crew of the said show came to my place yesterday for filming, and ...

This is a picture of how they all looked like before the sweltering heat from my room consumed whatever remained of their glamourous lives. Notice how unhappy Mr Soundman is, at the right. I would be too, if I were him. 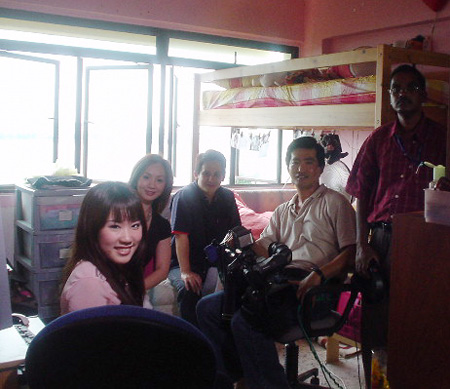 Oh, you think they don't look like they are very hot (Yes I know Diana is hot but I am talking about temperature-hot), and Diana even look distinctly cheery?

You think you know, but you have no idea! 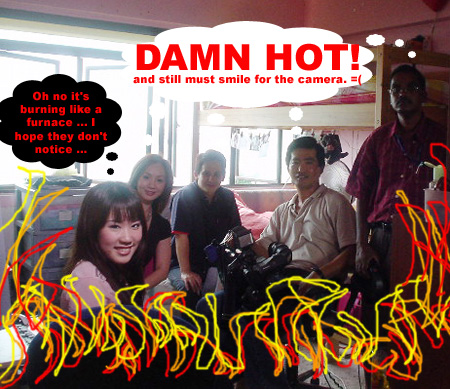 Shortly after the photo was taken everyone started melting (except me because I am used to the heat) and the mess took me some time to clean.

Now I have in my possession the last episode of Get Rea! to be filmed! Auction auction! Yi kuai yi kuai lai lai lai liang kuai liang kuai!!! MUAHAHAHHAHAHA

I am KIDDING. They are still pretty much alive, relax James. (As if he reads my blog wahahhahahhaha) 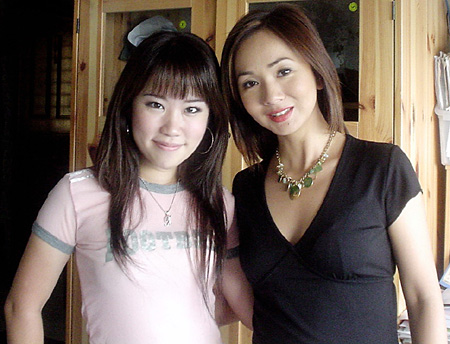 I am standing beside the lovely Diana and you are not!


Speaking of unemployment, Ghim hui and the rest of my RV friends have decided to add that term to the former string of disgusting words to describe me.

For instance, Ghimz would start by saying, "Yan yan you are short, fat, ugly, stupid ..."

"Unemployed ..." Peiying would supply in glee.


*short pause while they search for a new words*

"And pregnant!" Ghim would conclude in utter happiness, even frisking around a little.

*Everyone laughs evilly while I break down into vehement tears*


How on earth, may I ask, is being pregnant a bad thing? No wait. That is like a guy answering "I do not have sand in my vagina!" when you accuse him of having sand in his vagina. It implies that he has a vagina.

I am not pregnant!

To boot, I am wasting my past month's salary on food, as I am currently not earning.

Which is quite untrue, actually. I've been doing some freelance photoshop and designing. Ha! I am not unemployed!

Xiaofeng told me a story long ago:

One upon a time there was a piece of bread. It is a rather typical slice of Gardenia bread.

It sort of told itself one day, "Hey man, I'd like to conquer a mountain! I cannot be a real bread without climbing a mountain."

So it made the decision to climb Mount Everest, being a rather ambitious piece of bread. It is also wholemeal.

So it set off that very day to Everest, without any procrastination at all.

Up and up it went, climbing with all its might. Huff and puff; the bread did not stop to take a rest.

By midday he has finished climbing half of the mountain (it is very fast despite being wholemeal), but there was a problem.

He looked to his left, and to his right ... There is certainly no food in sight. It's snow everywhere!

There was nothing to do, except ... He dropped the horrific thought and continued trekking.

1 hour later he could stand it no longer! He bit off a corner of himself.

And it actually tastes pretty good!

He continued trekking as he is very determinded to reach the peak of the mountain.

As he walked he had to continue eating himself.

When he reached the top of the mountain he finished eating himself and there was no more bread.