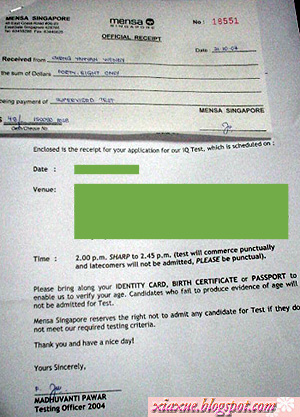 As you can see, tomorrow (btw why is the short form for tomorrow often spelt at tml? Tomolo? Even in acornyms we use Singlish?) is the date for my much dreaded Mensa IQ test. I want to stab myself in the eye for bringing this pain to myself. AND WHILE AT THAT, SPENT a bloody $48.

If I had used a little more logic (very ironic for the topic at hand), I should have spent that $48 to buy 144 packets of tissue from the next lucky blind old man who approaches me while I dine at a hawker centre. Heck, I might even be able to get around 180 packets if he cuts me a rare deal. You may be frowning and thinking, But Xiaxue, wouldn't a Mensa cert do you great in life? Think of the amount of stupid people you can slap with the cert, till Mensa kicks you out for rough behaviour!

YOU THINK YOU KNOW, BUT YOU HAVE NO IDEA!!!

NOTHING, ABSOLUTELY NOTHING, BEATS GOOD KARMA! (I'm in a foul mood) Buying tissue from blind old men gives me good karma, and I need good karma - to get a boyfriend, to get a job, to make sure I don't get cervix cancer, to make the people I hate fall into drains etc etc.

NOW I HAVE BAD KARMA, BECAUSE INSTEAD OF BUYING TISSUE FROM BLIND OLD MEN I USED THE MONEY TO TAKE AN ELITIST TEST IN AN ATTEMPT TO JOIN AN ELITIST SOCIETY!!

You know what? I think Mensa is siao.

Naturally, because Mensa only accepts smart people to join them, there has been criticism that Mensa is elitist.

To this, Mensa replies, I quote, from my Mensa book bought at a freaking cheap $1 at a flea market (but it is still an elite book ok, despite being sold so cheap!):

"Because of its membership requirement, however, Mensa has often been accused of elitism; but in fact it's no more "elite" than any other organisation that has a requirement for membership, such as BLAH BLAH ...... At these functions, the notion of elitism is laid to rest. Mensans come from virtually every trade, occupation, business, and profession. 'If we're elitist,' (OMG SPOT THE GRAMMAR MISTAKE A MENSAN MADE - AND ESCAPED EDITING) a national chairman once commented, 'then we're the most democratic elitist organization that ever existed!'"

No doubt a PR effort.

HOWEVER, whilst the argument in point (that Mensa has people from all professions and therefore does not discriminate; and that other organisations have criterias for membership as well) may convince those who cannot bother less, I am still a strong believer that Mensa is, indeed, elitist.

"The belief that certain persons or members of certain classes or groups deserve favored treatment by virtue of their perceived superiority, as in intellect, social status, or financial resources."

It's like saying, "It takes one to know one!" when people call Mensa elitist. It proves nothing, except that Mensa is indeed elitist, but only as elitist as the average organisation, right? Isn't that what they are saying?

So excuse me, Mr National Chairman ... If an organisation for retarded people is set up, and they have fun activities organised for members, but well, only people with IQ lower than 70 can join, is anyone likely to call them elitist as well?

Well, no, because elitism is often associated with intellect, or success. And since Mensa discriminates against people with low intellect - it is elitist. Simple as that.

Besides, I cannot think of any reason why people want to set up/join a society of intellects except that they are sick of interaction with brainless people - can you?

Let's face it. Mensa is elitist. But since the people complaining are likely to be people who didn't manage to get into Mensa (ie dumber people and possibly I will join their ranks tomorrow and be the latest victim of Mensa's elitism), it is also likely that these people accept that loop-holed argument that Mensa gave.

If I were the Mensa Chairman, here's my answer to reporters/society:

Qns: Mensan Cheng, do you concur that Mensa is indeed an elitist society?

Reporter: How can Mensa do this? You bloody bastards! How dare you discriminate dumb people? They have feelings too!

Me: Miss, what is your name?

Reporter: You even ask my name in a condescending manner, you horrible person! My name *shivers in indignance* is Sandra Bullshit.

Me: Hold on Miss Bullshit. (motions to Mensan interns and they bring me THE EXCLUSIVE MENSA BLACK CARD) Now, Ms Bullshit. From the way you speak, I can ascertain that you are of Mensa quality. Here's your passport to discriminating the world, and evidence to your superior intelligence. Are you likely to say we discriminate now?

Reporter: *Quivers in excitement* For me? Oh my god, you signed it yourself? (I nod sedately in response). HA HA HA I RULE!!! Hey you guys! (Addresses audience at large) I AM BETTER THAN YOU!

Me: Welcome to Mensa. What say you, we have a game of Chinese chess?

Q: I am stupid. But I'd love to be seen as smart. Will Mensa please accept me? Please? I am also disabled and unhappy.

Q: You guys are horrible.

Q: Alright I give up. Can I bribe Mensa?

A: Yes, you may. However, the risk you have to take it great. Anything too little, and we take it as an insult and will press charges against you. Anything too much (not that it will ever be) might be a loss to your personal wealth, of course. If you really want a guideline ... Well, here's a hint: Our members need a new golf club.

Q: I am into taxidermy. Can I join Mensa?

Q: That's discrimination, that is!

A: We are not elitist. We did a test on a large group of taxidermy enthusiasts, and results have shown that 0% of the 1,000 we interviewed are able to, in a matter of 3 minutes, come up with a commonly used English word that has the letters 'ufa' in it. If you can, welcome to Mensa.

A: Hmm. Our mothers what?

Q: Are Mensa members all nerdy and ugly? Geeks! VIRGINS!

A: We are born ugly, yes, but due to our innate sense of business, we are able to earn lots of money. We then go for plastic surgery, and therefore, we get fucked left, right, center. Thank you for the concern anyway. =)

Q: When you geeks get together, what do you do? READ THE DICTIONARY??? *Gaffaws*


So anyway, why do I want to join an elitist society, you ask in ferocity! Do I, Wendy Cheng, really think I am better than the world?

I think I am the smartest and tallest in the world. WAHAHHAHAAHAHA


One evil blogder, pretending to be very nice indeed, showed me a site with has, he claimed, similar IQ tests.

He also, in mock-kindness, told me that he wishes me luck for my upcoming (OMG in 12 hours!!!) test and I'd do better if I practiced on .. erm, what's that again? Yes, the advanced progressive matrices.

During the test, which is very difficult, I panicked when I realised I don't have much time left and humtum-ed the last 7 answers or so, leaving me with a very mediocre score indeed and as much chance of getting into Mensa as Fann Wong.

The previous test results, from the Mensa mock test, told me happily that I had EXCELLENT chances of getting into Mensa. The other mock test told me I had 9 out of ten answers correct.

I was convinced that the test the evil blogder sent me was ridiculously tough (in an attempt to sabotage my confidence and not go for the test at all), until I realised ... maybe it is not true, maybe he wasn't being evil ... Coz every time someone takes a Mensa test, it costs $$$$$$.

And therefore, it is very likely that Mensa faked me!! Their mock questions must be over-easy to convince me to take the test!

And to add salt to my vulnerable wounds, I was playing this game, and I got stuck at level 34 (password soabraxasa)! I asked my friend for help, and he solved it in 15 minutes or so. I feel stupid. However, I passed all the other stages to the last one at 42 though, if that is anything to be proud of.