I just bought a one-freaking-litre bottle of Bailey's from DFS at $27, so I just had some of the Irish concoction just now.

Less than 1 full mouthful of Bailey's on the rocks, and I confess myself drunk. I am THAT lousy. Help, I'm a redneck now! My blogders, please pardon me if I sound incoherent - I don't think I know what I am doing.

Because I've been very busy lately, I didn't have time for deep thoughts, which accounts for the lack of more 'indepth' blog entries. My *hic* apologies. Aye! Excuses. I have just been a lazy bimbo recently.

How much more stupid can Xiaxue get? sniffs the critical intellects who look down on tube-donning females, clicking their superior tongues in mock disgust. Aye! Far more! *hic* As this entry would show.

Yesterday I was hungry at night, and I decided to cook myself an egg.

"How would I like my eggs? Sunny-side-up sounds good."
"Fertilised."
"No, seriously, Wendy."
"Sunny-side-up lah, easier."
"But if fry egg must wash frying pan and frying slice."
"And use oil somemore."
"Maybe should cook half-boiled eggs."
"Yes half-boiled eggs is yummy."
"And also, can just throw away water in pot, don't need to wash."
"That is dirty!"
"Mummy doesn't need to know. Besides, egg only come out from chicken vagina. Chicken no period, so should not be very dirty."
"Yikes if not dirty then go lick the eggshell lah!"
"SIAO GOT SHIT ON THEM SOMETIMES."
"Ok settled, half-boiled eggs. No need to wash pot."

(Yes I do speak to myself in that manner.)

After deciding on half-boiled eggs, I begin bustling around with the pot and boiling the water.

Half-heartedly, while reading my novel (Emma; Jane Austen - Wong claims I am a loser coz I read Penguin Classics. I told her I bought 3 Penguin classics coz they are freaking cheap, $5 each) I took the fated egg from the fridge.

I went to the boiling pot, and determindedly cracked the egg on the side of the pot.


I realised that I cannot just break the egg into water, it will conjure disgustingly bland egg-soup/egg-water.

The smart thing to do is of course to crack the egg on a bowl and scramble it, but being the dumb dingbat I am, I somehow convinced myself that a cracked egg can still be cooked into a nice half-boiled egg, and tenderly lowered the egg into the water.

Thankfully, the crack on the egg was not too big.

Here is what happens: 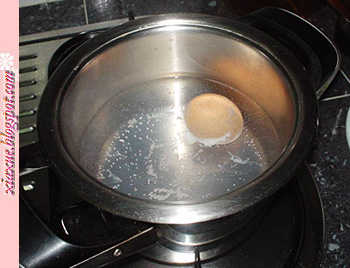 Little wisps of egg white, not unlike Lee Kwan Yew's fluffy hair, floated around the water in a leisurely manner. White blob appears at crack. 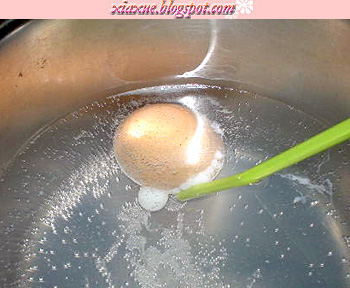 So cute, the blob is a bubble! I poke it with green chopstick. I went to read my book and timed the egg for a five minute boil. After some time, I went back to it. 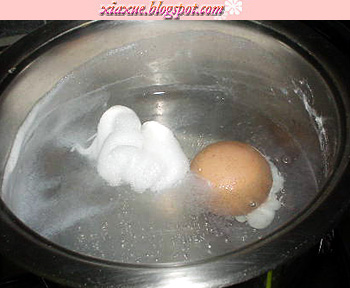 YIKES!
Foamy white substance has overtaken entire yummy egg!
Surely most of the egg has leaked out? Damn! 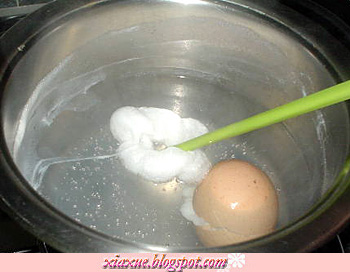 Come to think of it foamy white substance looks like my scrunchie. 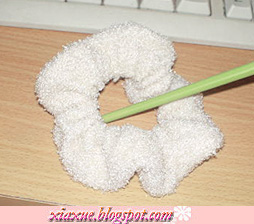 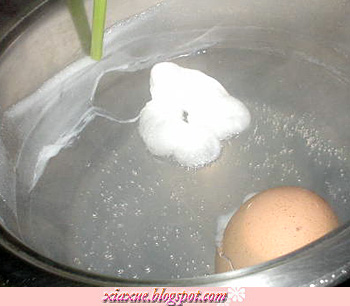 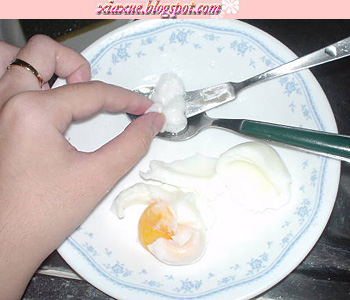 Egg turned out ok although too well-done!
I pinch the foamy thing.
It is surprisingly springy, like sponge.
I half-thought of eating it and decided I am not brave enough. 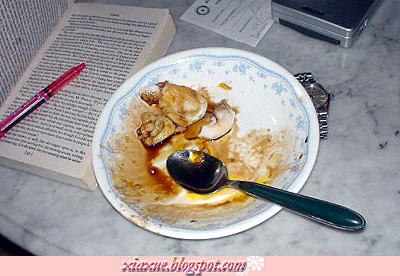 Not a bad egg after all!


Show you something very appetizing. Ever seen an oily crane before? 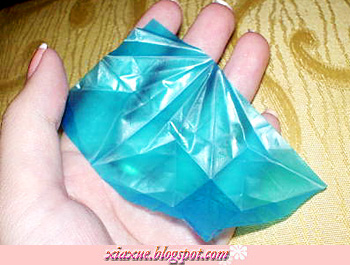 My COMPLETELY soaked in oil used facial blotter. Amazing the amount of oil I have. I feel like a peanut. 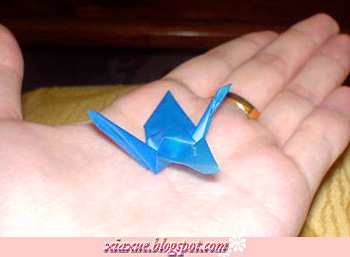 
More blogging tomorrow when I am more sober. *hic*

p/s: THANK YOU FOR YOUR VOTES YOU TWERPS!! Muacks muacks muacks. Really, thanks, all of you who voted for me for the award. I am so happy to have won the section! =)

Updated: Irrelevant comments obviously meant to challenge me? Simple as pie: I delete. No commenting for everyone then. Have fun reading MY blog.