- February 08, 2005
Once upon a time there was a Donkey and a Bull talking cock together at a nice green pasture.

With a cock of his head, the Donkey, an old and kindly fellow, gently nudged the Bull.

"Hey," said the Donkey tentatively, for the Bull was known to be a cocky one and might take offence at the slightest hint of an insult. "What do you think of the Chinese New Year? Its coming, year of the Cock, I heard."

"YIKES!" screamed the Donkey, before the startled Bull can even breathe in and begin to answer. Of course, this is very rude, and the Bull frowned (or attempted to since Bulls cannot really frown), failed, and decided to flare his nostrils in a vicious Bull-like manner instead.

"COCKANATHAN!" Bull exclaimed, angry at being interrupted although he hasn't really begin to speak. "If you wanna ask me a question at least listen to my answer!"

"No, old friend," said the Donkey. "I am just really shocked! That humongous thing between your legs ... IS THAT YOUR COCK?!"

"What?!" The Bull, curious whether it is really his cock the donkey is talking about, tried to turn around to look between his legs and failed extravagantly. He turned three full rounds and realised he looked extremely stupid and decided to settle for bellowing snot out of his nostrils instead.

"I can't see what you are talking about!" the Bull exclaimed, seeing red.

"Errrr..." said the Donkey, now chickening out because he is really terrified that the bull stampedes on him.

"What?!" repeated the Bull.

"It is really damn big for a cock, old friend!" said the Donkey. "You must see it. Let's go to a river, shall we?"

And so they did.

After some struggling, the Bull finally saw what Donkey meant, and with a swift kick from one of his hind legs, extracted a gigantic cock from between his legs.

"COCKles and Mussels! What the fuck are you doing hiding between my legs?!" the Bull roared at the Cock, now seriously trembling. Even as Donkey and Bull watched it, it dropped some more feathers, its wattles shaking in a rather grotesque manner.

The Cock was so big he almost reached up to the donkey's ass. Ass's ass! Ha.

That's besides the point. The big Cock whimpered, "I am just attracted to your hind legs!"

The Bull replied, "Don't lie to me you piece of chicken shit! I wouldn't believe you! You, like the rest of the animal kingdom, just heard the rumour that bull shit gets you to the top, and you want a piece of it!"

The big Cock, really damn big for a cock it is, sobbed into its chest feathers in a faggoty fashion.

The Donkey was about to ask the Bull to calm down and forgive the poor Cock when suddenly, without any warning whatsoever, the Cock imploded. Just like that, with a loud bang.

Feathers, viscera, and shockingly enough, an egg, all splattered on to the shocked Donkey and Bull.

The Donkey stared at the Bull.

The Bull stared back, and said loudly, "It wasn't me, I did nothing!" But it was too late. Some policemen dogs promptly came into the scene and arrested the Bull, pulling him by his horns.


His wife was cooking.

"Hey dear, how was your trip out to the pasture today?" inquired the caring wife.

Donkey, still in a state of shock, started relating the whole story to her.

"Now," said the wife, attempting to put her hands on her hips but failing and falling forwards instead. "Don't you start sprouting rubbish to me ok? That was really some cock and bull story you just said."


Xiaxue over the Years!!

I took photos of my Grandma's framed photos of CNY over the years! 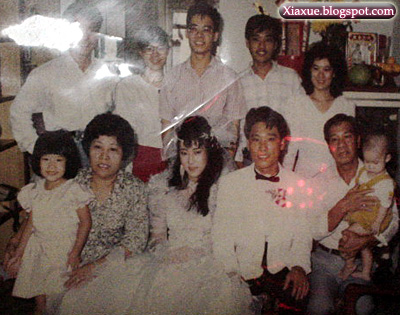 Ok this is not taken during CNY but well ... There I am at the side! My uncle's wedding. 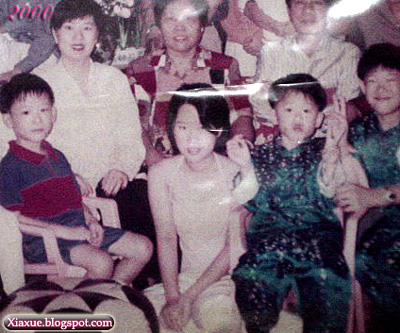 Year 2000. I was still an Ah lian then I think. Was in RV so the hair has to be damn short! Wore some white SATIN pants! What the. 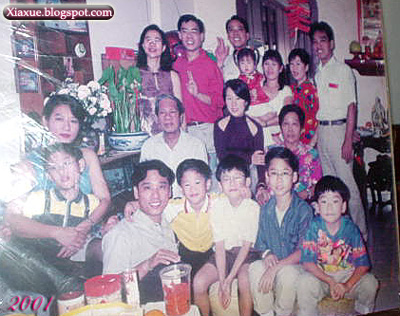 Year 2001! I don't know what got into me but I wore some putrid purple spandex halter neck thing. A normal halter would have ribbons to tie it behind the neck but mine had SLEEVES. After criss-crossing behind the back one has to stuff one's arms in.

The result? Exposed armpits. I don't know what got into me. 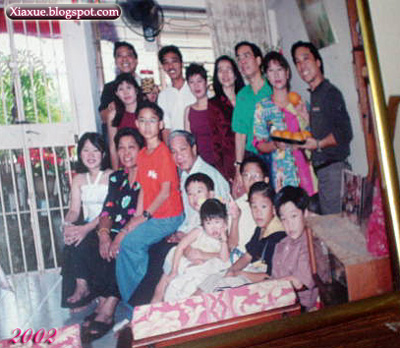 Wah lau. Damn unfortunate that I closed my eyes during the shoot. -_- 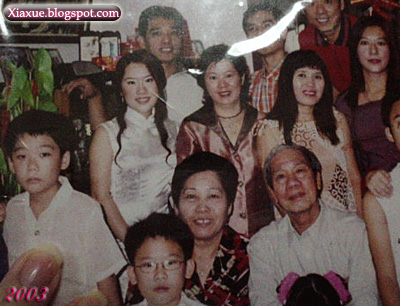 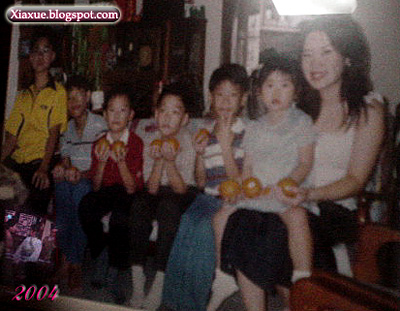 To blur to see anything la, sorry... Anyway, the bottom left is reflecting the TV! So ghostly right, like SHUTTER sia!


Ok that's about it. Going to sleep now, and Happy Chinese New Year!

p/s: I am disabling comments from now on because some smart alecks persist on writing some scholarly (inaccurate) analysis on the blog and I - which are totally irrelevant to the post, coincidentally what the comments is for. I delete the comments, why? Because I am lazy to argue with you. Why should I take time to refute? You are nobody to me. =) And your opinions don't matter. In case anyone mistakens my indifference as me being unable to win the argument, I simply delete. Besides, whats the point of arguing with retards? If you don't get it, you will never do.

I am very sick of accounting to people. Very very sick of doing it. Why should I account to you for my actions? Are you my mother? If you think I'm being, what?, hypocritical ... Well, ask me if I care what you think. No I don't. I blog because I have a voice, not because of whatever reasons you people assume. Did I know I'd become popular when I started? No. Then why did I start? The same reason I continue today. Once again, Happy Chinese New Year.