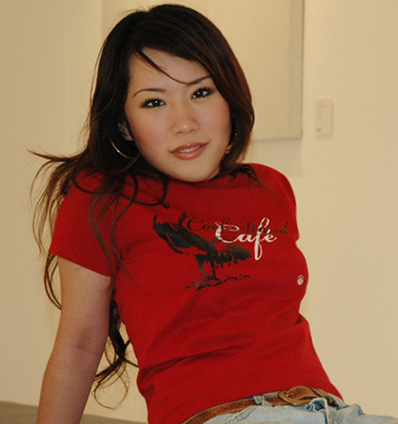 Hello everyone! As some of you might have already known, I've recently been appointed (important voice) as LocalBrand's AMBASSADOR! Wah! Zhun boh?

So what's this LocalBrand thingy? LocalBrand is a local brand for t-shirts with some, eh, daringly different messages. =) I like! Its handsome founder, Turodrique Fuad (his forehead here - doesn't look too handsome though.), was apparently around the shop when I was looking at his tees and declared himself a blog reader.

Things got on from there and I am now 3 months pregnant. Ha! Kidding. KIDDING! So anyway, we decided that I'd be the perfect endorsement board, as, according to him, I'm controversial and pretty like his tees. =)

I asked Turodrique (pronounced To-raw-drick) what happens if LocalBrand goes overseas and he said something like it will maintain its name. *shrugs, mumbles, no longer local what ...* Anyway that's not the point! Lookie at the pink wholesome sluts tee on top! That's LocalBrand! If you wanna see more, feel free to look at the site I guess. And if you like them, drop Turodrique an email. He'll squeal in joy! Even better, buy the tees. If you don't like the messages, i.e you have something against all the three teated women or wholesome sluts in the world, YOU CAN ALSO BURN HIS TEES AND DROP HIM A HATEMAIL!! Yay!

Is this the first time bloggers are getting paid for endorsement deals ala celebrities?

In Asia at least, I'm pretty sure it is the first. And I am honoured I am part of it. ;)

What do you think this symbolises?

I guess it is interesting to know that it is no longer just the models, actresses, or singers who are actually earning money from their fame. I foresee that more such deals are coming for the bloggers because not only do the bloggers have constant explosure without having to vie for airtime, they also have full editorial control as well as a certain credibility among its readers which the other stars might not have.

Are you gonna become this disgusting money-making bitch who is gonna bombard us with advertisements? Are you not going to be as truthful as you used to be?

No! I've had some other endorsement offers before this which I turned down because the brand is not ME. I'd never endorse anything which is not me. Editorial content will be exactly like before. I wouldn't force you guys to buy anything. If you like it, go ahead. If you don't ... well take it as a normal tee that I'm just wearing!

How much is this Turodrique guy paying you? Who is he anyway? Why is his name like that?

He is paying me 2 peanuts everytime I wear the tees. Ha! Nah... Industrial SECRET. FUCK DO I FEEL HAPPY! I remember the umpteen times I have to ask the stupid stars when I was working for Today how much the companies are paying to endorse them and they give me the smug face and say how sorry they are but they cannot reveal the amount. NOW MY TURN! Ask me again leh!

Ok, how much is he paying you, again?

Eh, I'm sorry but I cannot tell you. I can safely say it is an ambiguous 7 digit figure. Non Sg currency, that is.

And Turodrique ... Well his name is very weird coz he is Indonesian Chinese (*sniggers* their names are all very funny one lar) and all I know is that he quit a high paying design firm (his own, that is) to start the brand. The name is actually Rodrique but his grandpa or dad, cannot remember which, insisted on the Tu in front as that's the surname or something (then what is Fuad? Apparently I wasn't listening). His brother is called Turonny. Like very Tyranny. Heng no brother is called Bao Zi.

Are you exploiting us?!!!

I'd remember to tell Turodrique to cut two holes in the boob area for his next tee.

I suppose you are darn full of yourself right now? *disgusted smirk*

Damn right, it's better than yours. I can teach you, but I have to charge. la la la...

Still too hot! I'd try to blog tmr afternoon. Loads and loads to write about. Love ya all!