One thing I hate doing is to argue with retards. Really. It is disgusting, but quite amusing actually. Shuyin is laughing at some of the stupidity some forumites actually came up with. But let's not pick on Jovanna's finer points of her retorts because it is a waste of everyone's time, being the self -contradictory handful of brain cells she is. That's right, let's not pick on them. Let's laugh at them instead!

OMG! *wild laughter* SHE, WHO MANAGED TO SNATCH THE CAB AND GO OFF WITH IT, IS ACTUALLY ANGRY WITH ME!! And therefore, that was her reason for STARTING to verbal abuse and accuse me. She also said, omg omg this is classic, she is scared that her boyfriend DROPPED OUT OF THE CAB and therefore she was so mad!

Drop out of the cab! Like an ... inflated boyfriend blown into a light ball would gently roll out! Excuse me miss, but I opened that door an inch, and you are scared he bounces out? Eh?!! The cab was moving at a snail's crawl HAHAHAHHAHA

I am so amused by stupidity, I am.

I cannot stand it! I keep laughing! It is ok to be dumb, but please don't ACT SMART. Let me quote you one more classic:


Originally Posted by cookiedough
on a note of fairness, vabbit posted this thread FIRST. thats why xx reacted to it i think

Jovanna: yes. i posted tis to whine first. on the contra, she can choose to ignore it or react to it and she chose the latter =)

OMG ISN'T THIS SO FUNNY!!!?? I am not even talking about the "contra" thing. The whole sentence simply means ... I am not sure but it is surely stupid. She also sent me two emails along the lines of "I don't mind if you delete the post and once you do that I will keep my mouth shut" (OMG OMG) and "I'd apologize if we apologize together".

The two points are so ridiculously absurd that I actually spit ruffles all over my screen. OF COURSE you wouldn't mind if I delete this post (which I wouldn't because you are a blatant liar), and ask me if I give a shit about you not shutting your mouth. Sure, go ahead and say whatever no one is listening to baby!

AND WHY SHOULD I APOLOGIZE WHEN I DID NOTHING WRONG?! I was flamed, accused, and had my cab snatched (whether intentionally or not).

Anyway, from the amount of times Miss Jovanna has posted on the forum, it IS pretty clear that she is enjoying the attention, which I shall not bestow on her any further. In any case, she is too stupid to be worth talking to.

I shall however, go on to prove that is IMPOSSIBLE that both she and her boyfriend did not see me before they hopped on to the cab I waited 25 minutes for. 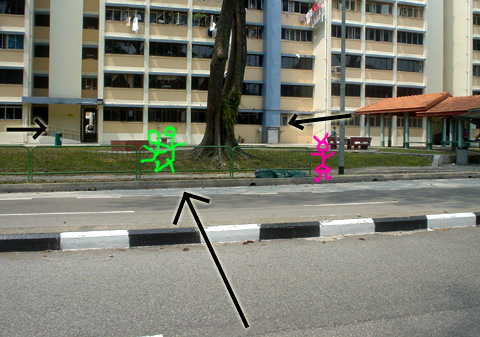 Now as you can see, this is the now-famous piece of Teban Gardens road which I usually take a cab from. Predictably, I am the stick woman in hot pink (also note I drew myself with antennas and a furious waving action), and the cab snatchers are in lime green and distorted.

Any resident of teban would know that where I am standing at is a place for cab waiting, because everyone stands there waiting for a cab, whether or not he/she is reading a palmtop. (Even if they didn't know, they SHOULD ASK. Bu wen zi qu shi tou!) Also note that there is a lamppost right beside me, and also the tree which provides the kind shadow aforementioned.

Now, besides being remarkably close to me, the snatchers are also positioned at a very evidently guilty, er, position.

I have marked with black arrows the direction in which they could have walked to the spot they eventually stole the cab from.

Using your sense of logic, unless they vaulted over the fence from the back which is highly unlikely, FROM EVERY OF THE 3 PLACES THEY CAME FROM THEY DEFINITELY CAN SEE ME. It was 730pm, the sun has not set (Sy says to help my argument I should mention the sun sets in the west and I stay in the west so it sets later there), and it was certainly BRIGHT ENOUGH TO SEE ME.

Ok, now we have established that she definitely saw me but still stole my cab. Let's move a step backwards to argue with the idiots who still buy her story.

1) If she discovered, after I tried to stop the cab, that in fact she stole my cab, THEN WHY DIDN'T SHE STOP AND LET ME INTO THE CAB WHEN I STOPPED IT? It is MY cab isn't it?

She is at fault.

2) If she discovered, after I tried to stop the cab, that in fact she stole my cab, then she would also know I have all reasons to be angry, THEN WHY DID SHE FLAME ME?

She is at fault.

Makes sense does it?

Her phone number is 15**... Last chance Jovanna. Apologize. ROOOOAAARR!!! You are at fault and there is no doubt about it. I'd love to see you try going to the police for having me reveal your number. I'm sure the police would laugh their batons upside-down. YOU WERE THE ONE STUPID ENOUGH TO WRITE IT ON A FORUM POST. It is no one's fault but your own that the whole world can see it.

Besides, how can you say it is me who gave away your number? *sniggers* Maybe I can just link the post ... Or maybe I can be malicious enough to call your principal?? Whahahaha! Just a passing thought ...

(To blogders: I am not writing about her anymore after this post. I am kidding about the threatening, but sheesh, don't tell her ok?)

Comments please do so on the previous post, thanks! Lots! Flame me too to be fair! I feel like putting it into classics! Lots of comments!!