Thank you my readers, for your enlightening. (esp MaG who made this into PDF format for me)

This came fresh from the press yesterday: 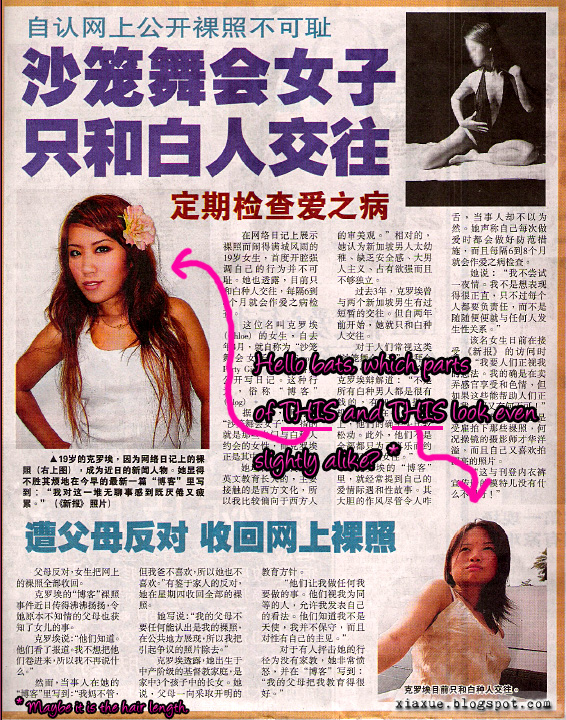 Go on, click it. That's Lianhe Wanbao for you.

KNN! Siao ah! My photo got mistaken as SPG's! For those who don't understand Chinese, the caption before my photo states that "19-year-old Chloe has been a popular news item recently because of her nude photos on her blog. She seems perturbed as she wrote on her latest blog entry: 'I am tired and tired of this bunch of boh liao things.'"


What an absolutely stupid mistake to make! Cannot see that my photo and her photo obviously is a different person is it?!!?!!?!?!? Maybe that big flower masked my face. It gets so much attention that people go like, "WHERE IS WENDY'S FACE? I ONLY SEE THE FLOWER!!" Kenny (Sia) says that he thinks my hair is so bad that plants start to grow on it. If so, I take pride that my plant is in-your-face big. *smirks*

Let me explain why it is so bad to be labelled as SPG in that article.

Because Wanbao fucking sensationalises!!!!!!! Seriously ah, I sympathetise with SPG. It was horrible how they made her up to be some haughty slut. UNETHICAL REPORTING!

The article is a direct translation of the saucy bits from its original counterpart - the already not-very-unsaucy Newpaper. At least Newpaper's article spans across 4 pages, the entire Pacific ocean, and then some. Wanbao's is one page and very, very inaccurate.

First of all, SPG's name is NOT CHLOE, in which they happily called her Ke Luo Ai for the whole article. HELLO, PEOPLE GOT REAL NAME ONE OK! I highly doubt SPG reads Chinese, if not she'd get so furious, she'd ball up her little fists, march to SPH Wanbao (and going in by the wrong entrance like everyone else and thus wasting 15 minutes to turn back) and demand to speak to the resident Angmoh reporter.

In which she'd find there is none, but is surprised to see Zheng Ge Ping making out with an certain turd-haired (turd-haired is Eekean's words) reporter* to get more news articles of himself. Zheng Ge Ping gets panicky as the photocopier continues to print turd's ass (okok, and his balls too, if you want to be picky), but he has no worries actually; obviously SPG doesn't know who he is.

SPG will then turn away in disgust, not because Turd is old and quite ugly with crazily-rolling eyes, but because Zheng Ge Ping is not quite Angmoh.

She then decides to just let the matter go but gets lost in SPH's multitude of locked glass doors and find herself in the photography room. Ooh, rejoice!

Before I got distracted.

I can't believe, of all things, they chose her line about Aids checks.

I wish they didn't.

Me: Stupid WANBAO! They put my photo on SPG's article can! Now I am her!

Me: I send you the article.

Wong: Wahahhaha I tell you, that line is classic.

Wong: Note how they said "bai zhong ren" (white-species men) instead of "Yang ren" (westerners). They made you sound like you like some white aliens. (Wong really thinks I am Chloe now)

Me: Hmm... Coz Yang ren is all westerners then got include blacks and all what.

Xiaoyu: When you say Yang ren where got people go and think of blacks lah!

Wong: You must print this article for me, it is damn funny. I am bringing it to Rotterdam to laugh.

Reporter: When you have sex with your boyfriends, aren't you afraid of STDs?

SPG: I always have protected sex. But as an extra step, I do go for checks sometimes.

Reporters: What checks and how often?

SPG: Just routine body checks! I think girls with an active sex life should always do checks, for even with the nicest boyfriend you'd never know what he might be doing outside? I go for Aids checks, around maybe once every 6 months or so.

But if the article just prints:

"SPG only screws white men, and has Aids Checks every 6 months." --- It is just so very different isn't it? But yet, it is factual. I don't know la. I think one must just be very careful when sprouting such statements. (I should learn too, always kena damn bad!!!)

I suppose you could even request the quote gets published in its entirety, or not give such info at all.

"I must say I couldn't read beyond a few entries because her blog bores me.

"Sometimes, she writes in very cheem language. For the average reader, you just want to get the idea or joke, laugh, and move on."

If you know me, you'll know I'd never have have said that. For one, I don't speak in such short sentences coz I am very long-winded, haha.

Anyway, to explain a little clearer what I meant, since so many people were offended by that stupid quote...

When asked why I do not think SPG's fame will last long, I said the only logical answer: Why is she famous only now and not before? Because of the nude shots. And therefore, when nude shots are gone, fame will be gone too.

Her musings, though sexual in nature and also supposedly good writing (haven't read much, but from what I heard), is too much for the average internet reader. Correct me if I am wrong, but from my net-writing class I learnt that people's attention span on the internet is far shorter than in real life. You only skim through articles to see whether it is worth your while staying on that site. Too many words? Click!

And because SPG's writings are a little too cheem for the masses, her readership never peaked during the times when she was only writing.

As for my own style, when the reporter asked me, Yes indeed, it happens to be an easy read, which is why my blog has so many readers. I don't write like that to attract readers - I happen to write like that coz it's my style.

In other words, I am praising her works and saying internet readers (including myself) are too impatient.

Geddit? Stupid people. If you think I am insulting her readers, you are vastly mistaken. I am actually praising you. Good for you lah, you are a cut above the rest!

And stop saying I am jealous of SPG lah. Very sian of that. We are so different, why compare? You are like asking Andy Lau whether he is threatened by Charlotte Church being popular. Wtf, of course not lah! Her popularity is not mutually exclusive to mine, and besides, what is with this blog popularity shit?

And contrary to public opinion, I don't dislike her. I am quite indifferent to SPG actually, just like how she is indifferent to me as well. I don't think she is a slut, because I think "slut" is just a word thrown around by guys who cannot get to fuck her.

"Slut", by definition, means the woman will fuck everybody right? So unless you manage to get her to fuck you, you have no rights to say she is a slut, loser!

And I have never stood on high moralistic grounds and judged her. WTF? (Utterly nonsensical article I shall not even start to rebutt. Breast-envy? I am supposed to be secretly envious of those tits? If I show you mine Chris, I'm just afraid you'll never find any other breasts beautiful again, and the damage might be permanent. =D)

I don't know why SPG agreed to publish her face shots though, wouldn't it affect her relationship with her parents even more?

Speaking of judging people and their parents, here's an interesting tidbit I once read:


Question 1:
If you knew a woman who was pregnant, who had 8 kids already, three who were deaf, two who were blind, one mentally retarded, and she had syphilis, would you recommend that she have an abortion?

Read the next question before looking at the response for this one.


Question 2:
It is time to elect a new world leader, and only your vote counts. Here are the facts about the three candidates.

Associates with crooked politicians, and consults with astrologist. He's had two mistresses. He also chain smokes and drinks 8 to 10 martinis a day.

He was kicked out of office twice, sleeps until noon, used opium in college and drinks a quart of whiskey every evening.


Candidate C
He is a decorated war hero. He's a vegetarian, doesn't smoke, drinks an occasional beer and never cheated on his wife. Which of these candidates would be your choice? Decide first... no peeking, then scroll down for the response.
.
.
.
.
.
.
.
.
.


Candidate A is Franklin D. Roosevelt.
Candidate B is Winston Churchill.
Candidate C is Adolph Hitler.

And, by the way, on your answer to the abortion question: If you said YES, you just killed Beethoven.

Pretty interesting isn't it? Makes a person think before judging someone.

Ok enough about the SPG issue. I also very sian by it already. BUT STUPID WANBAO!!! Urgggh!