For Douglas my ass.

- June 04, 2005
The Hitchhiker's Guide to the Galaxy (movie) was a fucking disappointment. Here's its review:

Sad, sad, sad. It was so bad, that I don't really know where to start. As my copy of the book is currently with Kelvin, I can't really compare to the book and tell you the exact discrepancies, but as I have read it around 3 times, I think I can be quite sure.

Now, I know that movie adaptations are often not exactly the same as the book, because of time constraints and maybe the director not being smart enough to actually read the book. Who blames him? Possibly fucking actresses.

OK. I just read IMBD and realised that most Americans like it. Fuck. What is wrong with them? I don't know what the late Douglas Adams (author) did with his radio talkshow about Hitchhiker's Guide, but the movie most certainly is not even slightly similar with its literary works.

As a big fan of the Hitchhiker's Guide series, I find it upon myself to clarify how vastly wrong the movie is. It protrayed the genius' book in a mediocre fashion at best, lowering his amazing (and rather difficult-to-understand) wit and prose to pander to the stupid mass audience. It saddens me like fuck. Why? Let stupid people not be able to understand lah! Why must they focus on dolphins jumping when DOUGLAS SAID THAT DOLPHINS ARE SMARTER THAN HUMANS? We are again using their cuteness to make the kids and stupid shu nus happy! Fuck them lah!!!

While my previous statement seems to credit the director/writer rather than fault him, I feel, even though Douglas' profound sense of humour is tough to translate into film and still sustain the interest of the viewer, it is still possible to inject into the film his other amazing ideas - which were obviously not done.

For example - When Arthur Dent was travelling with Slartibartfast, he passed thru this vast stretch of white wall, and the shock from the vertigo could kill a man. But did they show that?

Oh no. They, predictably, showed that Arthur Dent was travelling slowly through prehistoric Earth (which he didn't in the book). Beautiful Earth. And WOOLA! WE SEE ARTHUR DENT'S HOUSE! Very smart, smartie pants! How come there is a nice white house in prehistoric Earth?

I had enough. Here are the mad differences:

1) Ford Perfect: IS NOT BLACK. He is a man with orange hair. Black people don't have orange hair. And he doesn't blink often. I HAD ENOUGH. WHAT'S WITH THIS RACIAL HARMONY BULLSHIT?? DOUGLAS ADAMS MADE FORD PERFECT WHITE, AND SO HE SHOULD BE! Why must always put one black man into show?? I am infinitely annoyed.

2) Tricia/Trillian: is, I am consulting my eBook version, described as darkish skinned and with long flowing black hair and ridiculously brown eyes. And she looks like an Arab. WHY THE FUCK IS SHE THIS WHITE WOMAN?? There you go, producers: A racially harmonious thing for you to readily add in, and you made Ford Perfect black? Why not make the Vogons Chinese, TWERPS?! Arsewipes.

3) Zaphod's head. I had enough of seeing Zaphod "pull out" his head. N number of times in the book did we have proof that Zaphod's two heads are SIDE-BY-SIDE, and not top and bottom. It is so ridiculous, why is his head hidden in his neck?! And also, his 3 hands are always showing.

Speaking of Zaphod. He is a bit crazy yes, BUT NOT DITSY! They made him siao-siao most of the time! AND STOP WINKING, IT IS NOT SEXY! (btw I think Zaphod in the show kinda looks like Maddox)

Arthur Dent is the blur and supposedly slow one, not Zaphod. In the show, we see Arthur Dent giving commands like "Let's move, people!" to Zaphod. Ha! If Zaphod listens to Monkey-man, I'd cut my clit off. URRRGH

4) The Vogon's ship is Yellow, and there is only ONE of them. Or maybe two. Not pin-pricking the whole of Earth.

5) The Heart Of Gold is shaped like a sleek running shoe for Christ's sake. Not a round thingy with *rolls eyes* a detachable red spaceship. Oh yeah prodigy, tell me: How can the red spaceship travel if the Infinite Probability Drive stays in the white shapeship? Cock.

6) Marvin is not supposed to be cute. He was described as a largish robot.

7) The drinks dispenser DOES NOT WORK. Stupid producers!!!!!!!! It is supposed to analyse any being and produce a drink to suit their wants, but for anybody it always produces a drink that taste somewhat, but not quite, like tea. Or something to that effect lah. But no! Let's inject a bit of space-time humour and make a light-sabre toast maker as well! Utter rubbish.

8) Zaphod's brains. Now who is that fucking guy with burnt out eyes and no lower body? He doesnt exist in the book at all! Zaphod himself burnt out certain parts of his own brain. Now this may be a bit confusing: He needs to do something (explained in later books). And he needs to be president of the Galaxy to do it. But they scan your brains while choosing presidents of galaxies, so Zaphod burn the classfied bits out.

At no point in time did he get his brain snatched by some ugly, no-lower-body fucker.

9) Thinking cap that works with a slice of lemon? Pure imagination of the movie producers. Not in book.

10) All the Vogon bullshit. After the initial hitch on the Vogon ship, Arthur, Ford, Trillian and Zaphod did not meet another Vogon again until a few books down. It is RUBBISH that the vogons are chasing them, and the female within the Vogons which like Zaphod is UTTER RUBBISH!!!!!!!!!!!!! NO SUCH PERSON!

11) Slartibartfast. He is supposed to be stately and calm, and not like what they made him to be... scared and shifty. =(

12) Deep thought was NEVER on Magrathea.

13) What the fuck is a Point-of-view gun? Sorry, no such thing, and Trillian is most certainly not the type of girl who would cry for Arthur Dent.

14) Speaking of which. The thing that annoys me the most is the love story between Arthur Dent and Trillian.

There is no Let's-go-to-Madagascar BULLSHIT at the party. 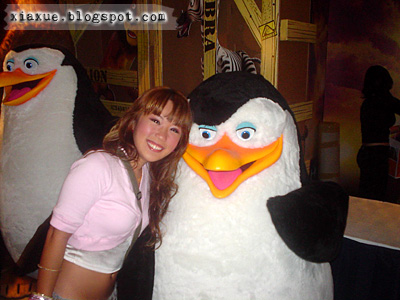 At the fancy-dress party, Arthur was barely talking to Trillian when Zaphod arrived and whisked her away (You might like to note that Zaphod could only attend fancy-dress parties as he has an extra head and in his case he made his other head become a parrot). He did NOT take a photo of her with his NOKIA photo, nor FALL IN LOVE. As best, he was intrigued by Trillian.

It made me super mad that they made a Science Fiction story transform into a typical tropical commercial love story. At the last part, where Trillian and Arthur kissed, I flinched in my chair and puked popcorn on the bald person in front. He didn't notice, as he was sleeping (naturally, considering how boring the show was).

15) The mice were not the two scientists who built Deep thought. Fucking stupid producers, anyhow say.

16) Marvin gets blown up? Excuse me, what cock is this? That robot has a brain the size of a planet! It is an insult... an insult!

I cannot do this anymore. There are so many things that has gone wrong in the show that I feel like stabbing myself in the thigh as I write this. It is my favourite book! How can they do this to my favourite book??

At the end, when they wrote: "For Douglas", I was thinking to myself that if Mr Adams have seen this movie, he would have jumped out of his grave and shot everyone within sight with a Kill-o-Zap gun.

p/s: I know Douglas Adams wrote part of the screenplay, but I refuse to believe he wrote all that bullshit.

p/p/s: I also know I wrote no spoilers. That is because nothing else can spoil the show as it is rotten to the core. Don't watch it, or risk falling asleep like you did reading this entry.