I am quite annoyed. Recently, every single male (or, sigh, female) blogger or blogder in the Asian blogosphere has been talking about a set of tits being flashed.

Not a very impressive set of tits, I might say.

I cannot imagine if my boss were to have seen my boobies before. I mean, what kind of image does it conjure of me to him, or even worse, her? (Pics of her face is not tough to find)

That is not my point. The blogger that this set of tits grew on has never been shy with her sexuality, and I suppose there is all the typical "I am just true to myself and proud of my body" shit, which is what made her quite famous today, in the blogosphere anyway. That, and supposedly good writing (to be fair I never did read it), and a courage to be labelled as a term which most sneer at.

I still have not reached my point. MY POINT IS, WHAT IS THE BIG DEAL ABOUT HER BREASTS, HER BODY, AND HER?!!!

I've been quiet till now, and I cannot stand it anymore. The men all around me and all moaning about how hot she is, and her wonderful her body is. Machiam Jolin season all over again.

I told T, (one of those many deluded men who thinks her bod is good) "Huh, don't you think her neh neh look very funny?"

T continued slurping his claypot beancurd and raised an eyebrow in question.

I sighed, and took out a piece of paper. This is what I drew:

I told T her nipples are far too long and pointing upwards, and yes, we've always heard the phrase "fuller breasts", but for the first time I understood how it is like to have a non-full boob. The tits look like they have been pinched shorter (in height) and then pulled upwards.

T had a look at my drawing, laughed, and while spitting sauteed eggs everywhere, took over the pen.

"That is good!" (*gasp - haven't that man seen standard breasts?!*) he mumbled enthusiastically. "That means they are perky! At least better than ..."

And he laughed and laughed.

URGGGH! THE MONSTROSITY! So gross, papaya tits. And T continued to guffaw to himself quite madly.

I was disgusted at his lack of taste.

Today, at the Bloggercon meeting at James Seng's place, I asked everyone around if they thought her tits were weird.

Nobody said anything, and some said they think her tits are fine, and blah blah blah there goes another bout of "her bod is so hot blah blah blah" (ok to be fair the guys didn't really praise her but I can see it in their passionate eyes).

WHERE IS THEIR INTEGRITY?!

WHERE IS THEIR SENSE OF AESTHETICS?!

WHERE IS THE LOVE, HONOUR AND GLORY?!

Because I had enough, I'd show u, with expert photoshop, what a standard set of boobs should look like.

Of course, the one that resembles my drawing is the 'before'.

You see? So much better right? Wahahhaha... the picture makes me want to mould her boobs for her.

p/s: To the blogger in question: I know there is no-point telling you not to take offence, and I know it is not ur fault that the men think you are hot (oh wait u did publish the pics), but do try to understand it was never against you but against ugly tits. Or maybe it's a bad angle or Bad Boob Day? Was never personal. At least I kept you anonymous. =)

So anyways, back to less angst-filled topics.

It's a happy, happy day!

Look what came in the mail! 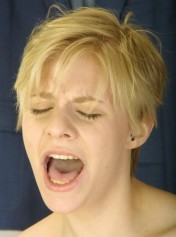 It is better than a lousy orgasm! (Nothing fights a good O, nothing.)

It is even better than my favourite ice-cream (macadamia nut).

Would kill a cute dog for it... 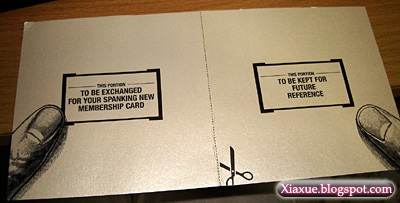 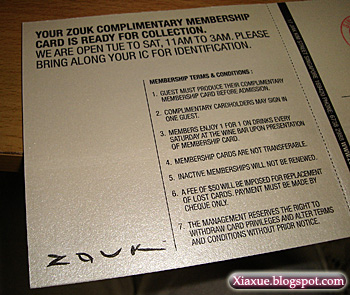 EVERYONE!~ TOGETHER! LET'S CLAP! Welcome, Wendy, to the atas world! You are now one of us and will be rewarded with free entry, everytime!, to the 3rd best club in the world!

(Ok ok, I know it might not be that big a deal to some of you stupid people who already have the card or *ahem* can just walk into Zouk like that bringing a flurry of people, but still! Remember my background: I don't have a filthy rich lao peh, nor smothering good looks! I worked hard to earn what I have today!)

Ok fine. I didn't work hard to earn that card at all. I totally didn't. Huifen knows Aldrin (resident DJ and he is like super cute lah, with hair that curls at the back. I like!!) so when she was talking to him, I told Aldrin, "Hey, I'm famous, gimme a card leh!" while grinning away - of course expecting him to say no.

Moral of the story? I totally abide by this theory: IN LIFE, IF YOU DON'T ASK, YOU DON'T GET.

Anyway, sing-a-long-ding-dong! I am so happy! I also bought my new camera! It's a pretty Sony Cybershot L1 in red!

4.1mp, and this is an important day! It marks the day where you will no longer see disgusting, sub-standard photos on xiaxue.blogspot.com!!!!!

Please pardon me! I am going crazy with the camera, and I MUST PHOTOWHORE!!

Deluge of photos coming up...

Eileen looking very pretty hor? =) We took this while we were at Chay Yan Street, and the dilapidated buildings like very apt for those act model shots.

Sigh. How I love aesthetics.