Mediacorp ah, mediacorp... I know lah... Many aunties like you the best, especially the Channel 8 hor, but hor, WHY YOU GO CRAZY WITH A RETARDS SPREE AH?

Channel 8, I tell you ah... That day, Shuyin told me about Tong Xin Yuan you know? Felicia Chin has a stupid name called Baobei!

I also want to be called baobei by everyone leh, like very fun right? Anyway, I thought she was just dim-witted and benign, thus causing her to be bullied by her horrible sister and mother.

From what Shuyin told me, I realised that she is not just stupid, she is... I'm not trying to be insensitive here, but I think Channel 8 meant for her to be either mentally slow or a bit crazy.

Because, her mother gave her money to buy food right, then she bought only 2 packets of food for her sister and mother, none for herself. They ate, then someone flipped the table or something.

Felicia Chin proceeded to eat from the scraps. Like a true piteous creature, she slobbered all over. I wrinkled my delicate nose at the sight.

I don't think any normal stupid person would do such a ridiculous thing. Her mom did not stop her from buying 3 packets of food, but she had to purposely buy 2 packets and torment herself in this manner.

I therefore logically conclude, Channel 8, that you guys meant for her to be mentally slow (or crazy, in which she is not as seen from later).

As a last option you show family shows, normally oriented around a food-store, be it Nasi Lemak, Fish and Chips, or fishball factories.

I suggest, Channel 8, that your next drama serial will be on Bak Chor Mee. How interesting would that be? Wow! A bak chor mee store! Let me see... This time, we'll make the male lead fall in love with the female lead, and an evil uncle will stop them by raping the male lead and making him confused with his sexuality!

Herein comes the mee: The mother finds out about uncle - male lead incest, and kills them all with really hot spring onions and 3 kg of pork lard.

They die, and are... NO! You guessed wrong! NOT made into meatballs! They are merely buried! Later, the mother and female lead falls in love, and frolic around Siloso beach, where female lead (lightning strikes) finds out about the murder of her former love! She is very angry but she decides to take revenge by having a split personality.

The uncle and male lead's long lost twins appear, and everyone takes them for the deceased. They live happily ever after, selling bak chor mee, a bit poor, but contented.

See, Channel 8? I thought of that plot in a mere 5 minutes! I didn't HAVE to use a retard did I?

BUT YOU? You MUST put a retard into every show meh? SOMETIMES EVEN TWO!

I find it very insulting, Channel 8, that you do such a thing. I feel that you may not have meant it, but you are trying to use these retard roles to gain sympathy for your otherwise worthless dramas.

Please keep in mind there are really people around with down syndrome, and I hardly think their parents will appreciate your PERFECTLY HEALTHY ACTORS DROOLING AND WEARING HIGH-WAIST PANTS, CLAPPING AND GRINNING MANIACALLY.

No seriously, stop it already.


Seeing that you are not about to, I shall go into the spirit as well. Let's choose, among a wide range of Channel 8 nitwits, which you like best! Of course, not all of them are considered retards. Some are crazy, but definitely, all are portrayed in a way that they are below par, mental prowess-wise. 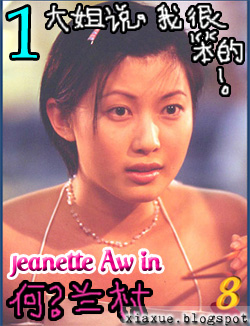 Marries a man who gets crippled and takes it out on her, thus becoming the epitome of the perfect wife for all insecure Singaporean men.

Oh, and his husband is also impotent and she is perfectly fine with it because she doesn't know what sex is. Perfect! I can imitate her very well. I hate Mo Jing Jing. She is the pioneer of all the Channel 8 retards. 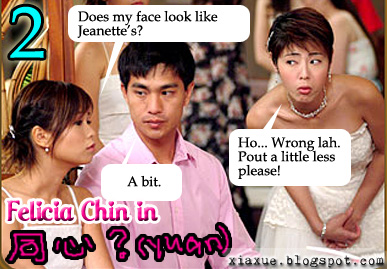 Mo Jing Jing wannabe. Daughter of fat fishball seller. Also epitome of the perfect wife for insecure, low-income Singaporean men who feel oh-so-threatened by girls who are even slightly smart. These kinda guys are those who frequent dumbass sammyboy sgforums etc and end up repairing people's cars.

Very ironically, she likes retard number 6, who calls her ... well... a mermaid. 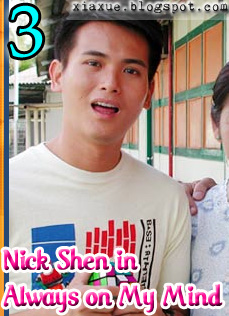 Oscar acting at the very least. Nick goes totally into his role of an autistic brother to deceased Christopher Lee, and is taken care of by his girlfriend Fann Wong. He has fun at playgrounds, wears his jeans real high with a tucked in tee, and acts like a down syndrome victim (in which most autistic kids are not supposed to behave like he does).

I find his acting very disturbing, not only because it is so real (he really has that look, doesn't he?), I feel that it pokes fun at down syndrome victims, albeit unintentionally.

Even worse, Fann Wong gets points for being the perfect girl as she takes care of him, giving him bambi eyes and all. In actual fact, I highly doubt she gives a flying fuck and wouldn't even look up from her nails. 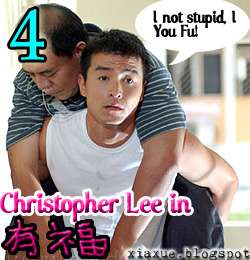 Momo says she likes him. An honest, ditsy man he is.

One more fucking time I hear that "Wo bu shi ben dan, wo shi You Fu!" statement I'm gonna slash my wrists.

Shut up You Fu, you are undeniably a ben dan. 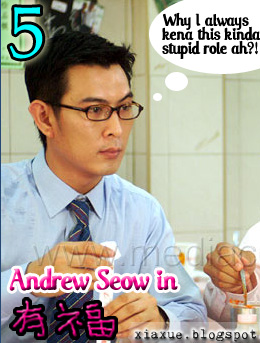 Brother to You Fu, Andrew Seow, after acting as a deaf and mute brother to someone in his last show, is now crazy. He thinks he is a doctor and dresses for the part, apparently.

I only watched that one episode of You Fu (which that big-boobed girl acted as shu nu Xiao Yan) and thankfully enough, Andrew Seow didn't appear.

A few more roles like this Andrew, and people will really call you Andrew Siao. 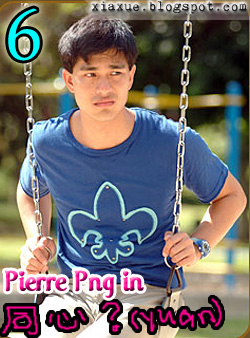 Someone slap that fucker please. Shut up about your stupid fishball-selling-mermaid! Pierre Png, a handsome married man with a splintered liver in real life, is acting cute, everyone! It is ok if girls act all dumb, because guys have huge egos and like wimpy girls. How about a wimpy guy who cannot take care of a family for nuts, yet want to get married?

I wonder if he is going to teach his kids maths.

Oh and by the way I love the Mandarin-speaking Indian boy. He is damn funny can?

I have this nagging feeling, that they are only showing us these people because we can relate to them and it just means that Singaporeans are all ... well... dumbbells.

p/s: Due to the sensitive nature of this blog entry, I will not allow comments (for people will start accusing me of things I didn't say again). However, if you get outraged or something, please do keep in mind that I have all respects for people who are mentally unsound. I have an autistic relative. My issue here is that Channel 8 is using these dimwitted or retarded people as objects for pity and the occasional dramatic issue. Which I think is wrong. Once in a while it might educate us and let us empathise with people like that, but I feel it is becoming excessive. Cheerios
- July 11, 2005
Newer Post Older Post Home