I give up. Girls, have you ever experienced a situation, where every single one of your girlfriends thinks someone is fugly, but yet the guys all think she is hot? 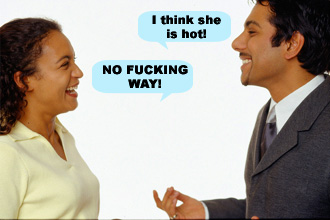 FUCKING IRRITATING RIGHT! Are those guys BLIND or what?

Almost a year of working with Maxim made me so frustrated, I almost puked blood. I constantly complain that their girls (ditto other men's magazine too) are sometimes plain, ugly, old and fat, but yet, miraculouly, sales are still doing well - symbolising that hot-blooded young men everywhere are still wanking to these cows.

After so long, I have come to realise one thing. Men and women see things in a TOTALLY DIFFERENT WAY.

Take for example Celest Chong. Guys think she is hot because she is... I don't know, I have a vagina ... Leggy perhaps? 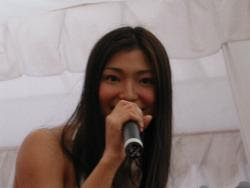 Every Singaporean girl knows she is a cheater because she has a very wide face and she constantly uses her long, boring, one-length hair to cover the sides of the face.

I see until I wanted to take a pair of scissors and snip off her swishy hair man! Ears are for your to tuck your hair behind! It is super irritating. I mean cmon, STOP IT ALREADY. Go have surgery please.

You try suggesting to the penis-species that Celest Chong has a wide face. I am almost 100% certain they will reply, "NO, DON'T HAVE WHAT, she is so chio!"

Utter rubbish. They just fail to see through a simple scam like using hair to cover fat face shapes coz they are MEN. (If you are male and you managed to see thru the scam, you are gay)

Not only does she have irritating hair, she also has eyes which look like they are permanently blind. I HAVE NO IDEA WHY THAT GIRL DOESN'T EVER FOCUS HER VISION! Is it because her blind role last time gave her good results? *snap fingers* focus here!

I recently got even more frustrated. Shuyin, Wanyi and I flipped through a fashion mag, and we saw a slightly uglier than average girl. We were criticising her make up, for her eyes were slapped with a bright blue eyeshadow that was not blended, and the rest of the make up non-existant.

3 days later, Wanyi's male friend announces to her that this girl is his dream girl because "her body is perfect".

I held on to Shuyin's hand tightly, wanting to pull her to the roof of our building and jump down together for... WHAT IS THE WORLD COMING TO?!

Unluckily for the two of us I tripped on a ice-cream seller and didn't manage to jump. We are now still living, but very miserable.

Once again, WHAT IS THE WORLD COMING TO? 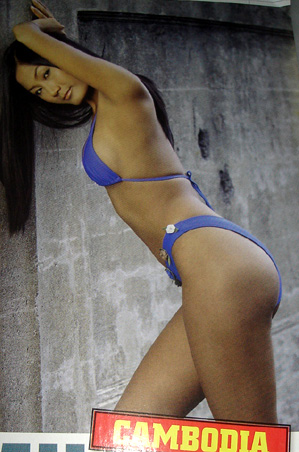 (Also do try to appreciate that I tried very hard to find girls who won't read my blog so I don't get guilt trips. I don't think Cambodia has internet)

So yes, this ugly girl is on Maxim. These are the thoughts that goes through a FEMALE's mind when she see the picture:


Let's see what the guys see when they see Ugly Specimen A: 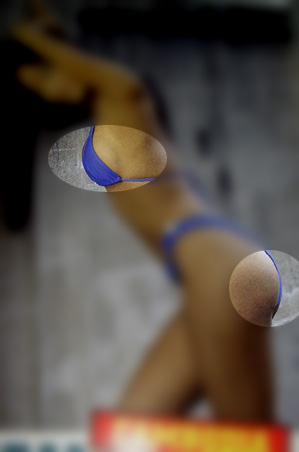 Girl: Don't you think she looks like ah kua?
Guy: No leh, look normal what. (actually cannot even see the face) 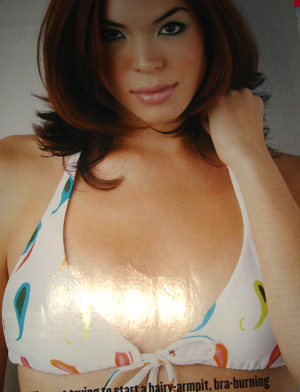 1) Wah siao, why eyebrows draw until like that, eyebrow pencil free one ah?
2) Once again, look like Ah kua leh...
3) Kinda like the lipstick actually...
4) WAH! Someone burn that freaking ugly bikini! Bitch please! 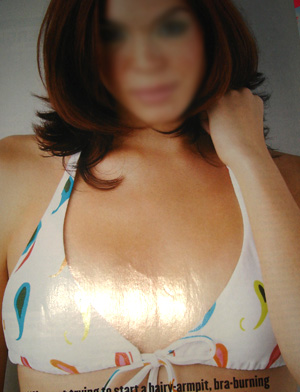 Guy: "Nabeh, so flat." (Proceeds to flip the page) 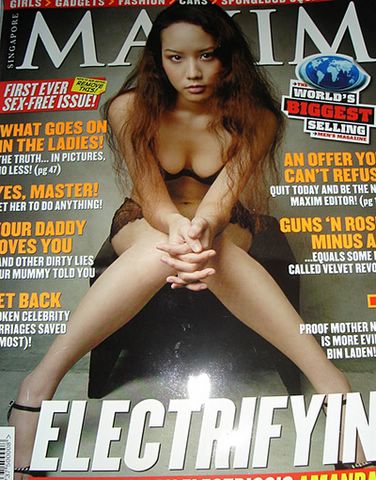 I had no idea how she looked like, then I looked at the pictures and I went like WTF! Pretty?

THE HAIR! FOR GOODNESS SAKE HER HAIRSTYLIST SHOULD BE CASTRATED A MILLION TIMES. Tie it up. Shave it off. A wig. Flat irons. Dreadlocks even. Just DO NOT FUCKING PUT IT IN FRONT OF HER SHOULDERS AND PRETEND IT IS OK. ("How ah her hair?" "Don't know man!" "Fuck it lah, we shall just put a few strands in front lor, may look nice also what.")

IT IS NOT OK. It looks like MOSS. Like dead weed. Worst of all it looks DIRTY. As if it is not enough, it is also ... Half black and half brown. I cannot bring myself to forgive that at all. If you know you are going to be on a cover page, at least DYE YOUR HAIR.

The make-up is amatuer and sloppy.

The tan is not here and not here...

The background is dank, dull and unflattering, with a melancholic greyish tinge to add to the dirty feel.

All they see are boobs, and legs. Repeat after me: Boobs, ass, and legs.

We girls have MUCH BETTER TASTE: 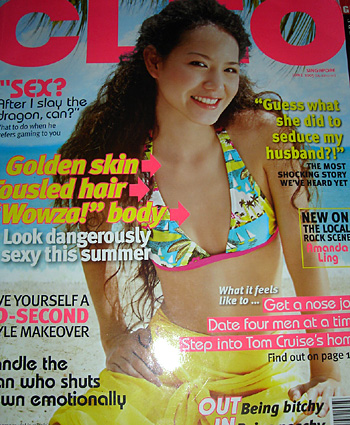 Do you even recognise Amanda, now with good, expensive make-up?

My goodness she looks so MUCH cleaner, prettier, and more radiant! And she doesn't look like a kid anymore too. She actually looks beautiful!

Give us colours! We love colours. =) Damn those dull men's magazines.

From now on, I will thus stop arguing with men about women. I will just take it that they are blind.

p/s: You might have seen these along orchard or something! =D 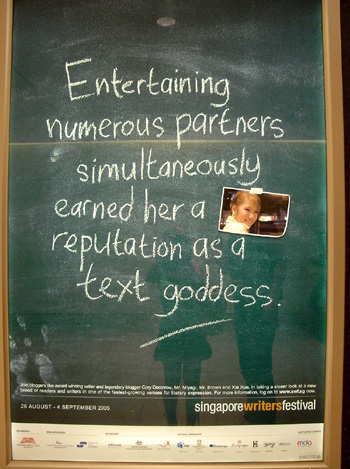 Shadowy reflection of a tall man? Who is he? =) 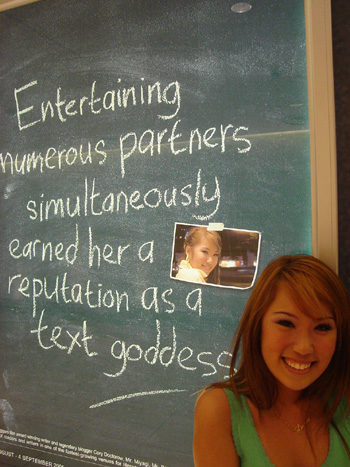 I love this photo!

Promotion pics for my participation in the Singapore Writers' Festival! Who was the fucker who said people like Nick Liu are "real writers" and I am not? Huh? Again? What do you say? STOP WHIMPERING! Oh yes, I got invited to the festival, and sorry to say ... the "real writers" are not...

(Allow me to gloat please, you have no idea how small these people made me feel back in 2004 where they constantly remind me how my writing sucks compared to theirs. I waited so long for this moment to slap them in the face and make them eat their words, and boy does it feel good. =D)
..............

I also rebonded my hair! 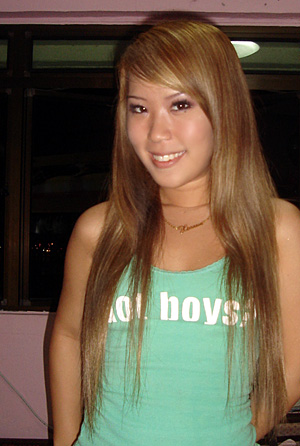 Ha! Joking lah. You think I will meh, I love my curls so much. =) But straight hair is a good change!

(For a person who is about to go on cover of a certain magazine I have a lot of nerve to criticise others like that - but my aim of this post is to simply state that men and women have utterly different tastes. Anyway, I am prepared for people to slam me for the shoot. I like it anyway. =D)
- August 31, 2005
Newer Post Older Post Home