The boys at Gadgeit.com invited me to review some of their products... I know lar, it looks like gadget spelt wrongly, and they do sell gadgets. Very weak pun right, haha!

So anyway, before we begin on testing their products, Gadgeit.com is Singapore's first gadget and novelty gift shop. Boys should go have a look at the website because they sell the things boys like (I suppose), and girls should visit the website because... (trust me, I'm a girl)

1) The five founders are young, good-looking chaps. *blush*
2) You can buy stuff for your male friends for their birthdays. Very irritating how difficult it is to buy stuff for guys, isn't it? Sports gear, cologne, books... SIAN! Buy gadgets. :D
2) They sell a USB "massager". More about that later. HAHA!!

Let's start with the drinking gadgets they have! I don't drink (I will just slump on the toilet bowl after a cup of Vodka ribena), but I've been to enough parties to get very bored with the same old drinking games... Five ten. Five ten again... 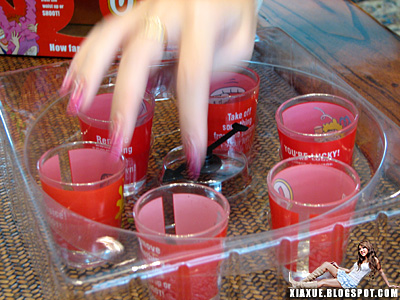 This is a combination of strip poker and drinking - which means the ladies are in the disadvantage any way it goes, unless you are a raging alcoholic/nymphomaniac. You spin, you either do the punishment (usually taking off a piece, baby!) or drink, in which you will get so drunk you'll strip anyway!!

But good for boys if you can get girls to play!! If not, I suppose you pray your friend choose to drink, else you have to endure the sight of his danglies. 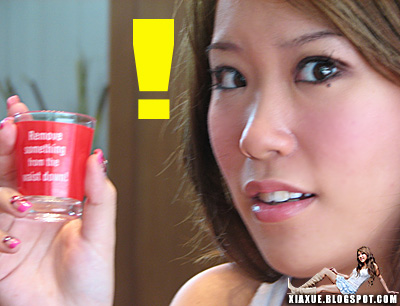 Remove something from the waist down?

MAI SIAO SIAO! Atas drinking game ok? Watch the chess game get more and more difficult as you get more drunk!! Hahaha... I was quite surprised at the quality of the glasses. One side's printed in black while the other, white. It is then placed on a square glass piece.

Not only does it function pretty neat, it looks nice too as a coffee table display!

Eh, the placing is not I do one ok, so if it is wrong, it is not me who is uncivilised. *ahem* 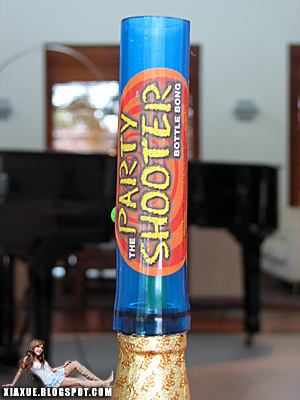 The thing we are selling here is the blue tube-like object, not the baby grand piano behind.

If you are the siao house-parties sort (like Eileen-the-alcoholic-Tan), this thing is quite perfect! I still do not understand how it works (like I don't know how the TV works, but when people ask me, I pretend and mumble intellectually about the cathode ray gun and it shooting electrons); it apparently is made out of an exterior tubing which you attach to a beer bottle, and a long inner tubing.

When fixed properly, it will tip the entire contents of the bottle into your throat within 20 seconds, and you won't even feel a thing!

Quite cool right? Now phone perverts can go up some levels by trying to shoot girls on the MRT with a "lighter" instead of their stupid mobile phones, which is like so freaking obvious when it is done!

Only problem is MRT personnel think that they are trying to set fire to the train, then they get caught MUAHAHAHAHAHAHHAAHAHA ORH BI GOOD I HATE PHONE PERVERTS!!!!

Eh. Sorry for the digression, I mean, the rest of us normal people can use it as a web cam too. :)

Introducing their USB products, for geeks! I'm a geek too coz I don't even watch TV anymore, I watch computer. :( 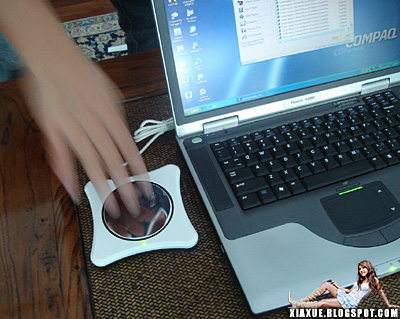 One great product for office people! You bring your piping hot coffee into the office and it becomes ice-blended in a bit? Now you can just put it on the cafe pad, plug the USB into your computer, and voila, hot drinks!

And apparently it IS a little too hot to touch. 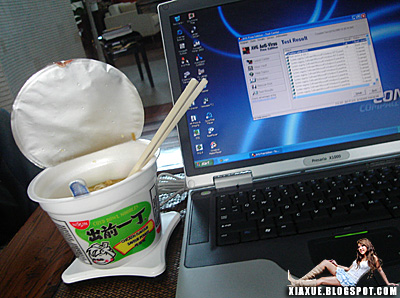 It worked on my noodles too!! :D

I don't know if the Gadgeit guys are being funny or something, but the massager is put under "Just for girls".

Speaking of massagers, people who have watched Sex in the City would possibly understand the link here. Those who haven't, you can post a comment asking what I am talking about and maybe a kind soul will explain it. Haha! 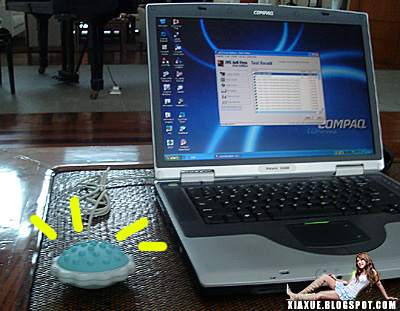 I mean, can't it be in another shape? 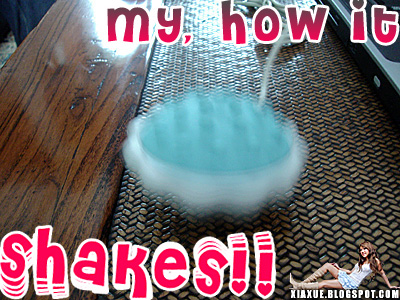 I suggest the boys buy this: 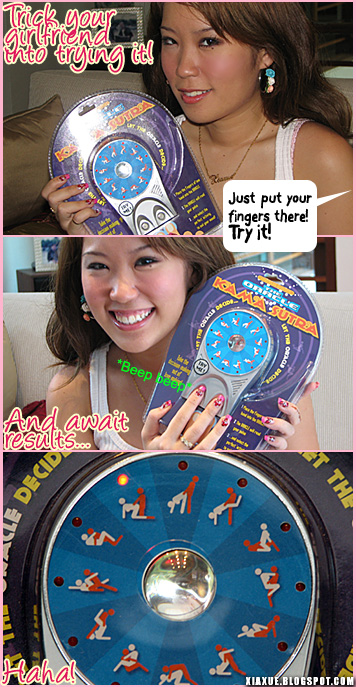 Because guys are so boring when it comes to positions. I don't know for sure of course, I'm just saying so that you guys buy it.

So anyway, the "oracle" (or so it terms itself!!) will be good for boring couples! Or bored couples. Give this to your partner for a hint if he is only digging the missionary.

OMG I just realised the 8 o'clock position is very scary-looking.

Last but no least, the Free Talker!!

One of my favourite of gadgeit's imports, this is!

Free talker is a pair of walkie-talkie watches. They are pretty loud and clear, and ranges across 1km or something like that.

Isn't it so cool? When was the last time you lost a friend in Hongkong and had to pay roaming charges while you called like 25 times until you found each other at one of the 17 entrances to Mongkok station? For me was like 8 months ago.

If only I had the free talker then!! Also good for people travelling in separate vehicles, or people who wanna pretend they are detectives.

There! Isn't it so cool? I wanted to buy one for Eekean because she is constantly going missing when we go shopping, and the irritating thing about her is that she doesn't pick up her calls!!! Grrr... Then I remember that she is in Rotterdam. Sigh.

Okok, I'm off to sleep now. You go surf their site ok?