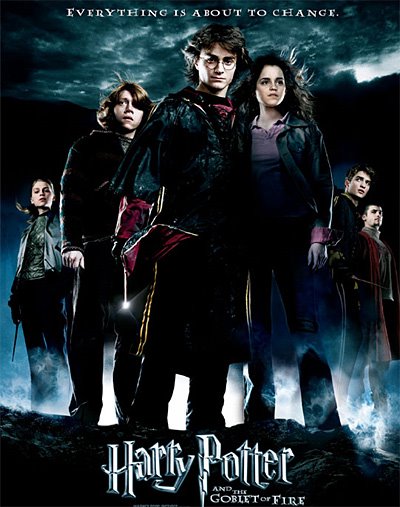 Just one reason is enough to justify it: They made Hermione go ga-ga over Krum.

Why must they dramatize all the love scenes, WHY?

Since when did Hermione go all weak-kneed when Krum spoke to her? Disgusting. Hermy's supposed to be indifferent to him, unlike the rest of the gross gushing girls.

They made her this emo, cranky, huggy bitch, which I HATED coz I hate chao shu nus and they made Hermione one of them. Oh, and she is ridiculously pretty THROUGHOUT THE WHOLE SHOW.

Remember the book, when it was discovered that it was Hermione who danced with Krum, wearing a periwinkle blue dress? (Pink in the movie, bloody hell)

I remember the moment I read that, clearly...

I had severe goosebumps, coz Harry said he discovered that Hermione's grin was so different now that she had shrunk her teeth, and her hair, usually in a big messy bush, was sleek and combed into a smooth bun tied at her nape... And her posture was just different, maybe it was the absence of the dozen or so books slung over her...

REMEMBER? I bet you do.

No magical moment. CUT. Hermione looks pretty after dressing up yes, but she was not different, just made-up. And the fact that Krum liked Hermione when she looks pretty irks me, coz the beauty in Krum liking her is because he DIDN'T GO FOR LOOKS ALONE, HE LIKED HER INTELLECT.

The rest of the movie was loosely pieced together, and Dumbledore SUCKED, being so fierce (at one point he actually seized Harry around the neck, something characteristically UN-DUMBLEDORISH!!), Moody sucked, and basically it wasn't GOF.

A real Harry Potter fan will not like the show. Yes, I can understand that a successful movie is different from a successful book and there is time limits, but remember that it is the HP fans who will watch your shows, and you cannot just change all the fundamental things what we all like about the book!

Like making Dumbledore a fierce, shouting person instead of the kindly, patient, wise headmaster he is. Dumbledore never shouts at people, never.

Like making Voldemort, who is at least 65 (He opened the chamber of secrets at the age of 16, 50 years ago) look like a crazed young man of 40, who is not the least bit scary, albeit ugly.

But I cannot accept that Dumbledore becomes this raving lunatic and Hermione becomes another Cho Chang. My favourite characters defaced, and I HATE IT.

I cannot understand why simple things they cannot just keep the same as the book, like the 1st 2 movies did (stick as close as possible to the book).

Like Ludo Bagman being blonde, round and jovial, wearing his yellow-black striped robe. Is it that difficult? To make that robe for him? Instead, Ludo and Crouch wore the SAME robe.

OR at the prior incantatum or however you spell it scene... THEY ARE SUPPOSED TO BE FLOATING IN MIDAIR YES?

Is it that difficult to do, to make them float?

Dark-red robes for Drumstrung students... WHY NOT JUST GO WITH THE BOOK? Why insist on making it bloody BROWN?

But no. Being director means must be creative is it?!

Scenes that are over fast, they drag (dragon scene, Harry brought the dragon on a Tour-de-Hogwarts; bathing scene, made a big fuss about Moaning Myrtle flirting with Harry).

Scenes that are supposed to go slow and build your tension, they make it over in a bit (waiting for other champions to come, while in lake).

There are of course redeeming features, like certain funny scenes and graphics being fantastic, but overall the movie rushed its way out, and the entire storyline was changed.

(Me: And what is with all those stupid beauxbaton girls doing the "ahhh..." "ahhh..." and butterflies fly thing?
Christian: Oh, you are just jealous.
Me: ...)

I confess myself disappointed.