Men and their selfish rudeness!

So anyway, before I commence on my writing the damn script (I've been procrastinating because I decided to read the book again before I embark on the task :D), I wanna complain!

That day, the whole group of us when to Mambo together. Actually, Birdy and I wanted to bring Junne (she added an N to her name in the hope of sounding a little more unique) to Mambo to reexperience Singapore, but Kelvin and the boys were going too, so we all went together.

Speaking of which, I got bounced out of members A-Fucking-Gain, for the 2nd time. I cannot take it!!!!!!

Bloody elitist BASTARDS (I'm elitist too, which is precisely why nobody should be elitist against me)!

I mean, obviously they cannot bounce me coz I'm a member, but they just refused to let Shuyin and Junne both go in, coz *roll eyes* one member can only bring one person in.

I don't see what's the muthafucking problem. Is Shuyin chio? Yes. Is Junne pretty? Yes. So? Isn't the whole POINT of members to have supposedly cool people inside, mingling with each other and making everyone's life more meaningful?

The whole theory about making a part of a club elitist is simple:

Simple? I thought so too.

Who chooses the bloody bouncer ANYWAY? Eileen (Wee) and I were talking about this bouncing thing the other day, and we both came to the conclusion that most bouncers in Singapore have no idea the who's whos are.

She (Eileen) brought two friends with her some time ago, one of which is some big shot director in Hongkong and the other, a HK actor.

The bouncer doesn't know who they are, and well, he is not to be blamed, for he is Malay (and Malays don't watch HK TV I presume). He refused them entry into the VIP area (not Zouk, another club), opening his arms spread-eagle and rudely proclaiming they cannot go in.

Eileen tried to whisper to him who they are and the necessity of getting them inside, because obviously such people would prefer a little more privacy... But the bouncer refused to listen. Doesn't the words "actor", "director" and "rich" mean anything to him??!

In the end they went to another club I think, and splashed a great deal of money there. WTF.

Who's fault? The ignorant bouncer's.

The sad dilemma about such things, is that you cannot possibly open your mouth and tell the bouncer who you are. He is just supposed to know.

Back to the point. So whenever I get bounced, I will just walk inside, and get a friend inside to bring my friends in.

The bouncer will make a grimacing face, and grudgingly step aside to allow a more influential customer to bring my friends in, while I stand at their sides, trying to bore holes into his face by vicious staring.

It is awkward and embarrassing for everyone, so why not just let my friends in next time, asswipe?

*mumbles indistinctly about Ministry of Sound*

Later on, Kelvin got a table near the dancefloor, so the 3 of us girls just sat down, swaying a little to the music.

Presently enough, this group of boys started to dance near to us. Typical boys, wearing striped/flowery shirts and that sort, and they weren't ugly (or so I can see in the dim light).

The one nearest to me was wearing a black Le Coq Sportif jacket, and he was possibly the best looker of the lot. :)

After a while, he smiled at me and asked, "You girls are not dancing! It is not because we are occupying your space, right?"

Or something to that effect lar.

I smiled and replied the truth, which was that we were "guarding the table", because Kel and Vyasa went out for some fresh air.

I cannot really remember what happened, but Mr Le Coq asked my name and told me his in return, and I guarantee that I was perfectly friendly.

He even put their group's drink on our table, and said that the empty table needed some drinks on it, and also offered Junne, Shuyin and I a bit of the alcohol. We shook our heads.

Time moved on and nothing further happened with Le Coq, and Kelvin and Vyasa seemed to have vanished into Zathura, so we girls decided to forgo the table and dance with the rest of our friends. 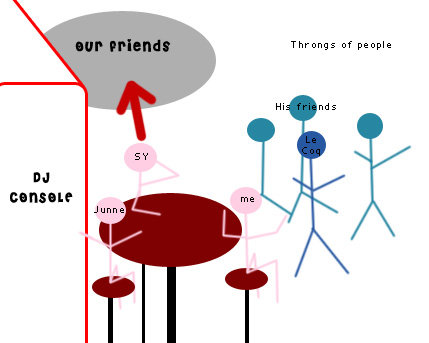 See, I even drew a picture for you to understand better. As you can clearly see from the picture, Shuyin is a bit siao.

So anyway, while we danced, Mr Le Coq decided to be a bastard and ....

Yadda yadda small talk, and he asked her if she wanted to dance with him!!!! (Junne said no, orbi good). IN MY FACE OK??

I CANNOT TAKE IT ANYMOREEEEEEEE!!!

WHY THE FUCK EVERYTIME ALSO LIKE THAT! He purposedly one is it??! WHY??? Why do guys always do this to me?! Why??!

MEN! (I am so angry now) Don't you all know any MANNERS at all?

When you try to get to know one girl, you bloody STICK TO THAT GIRL THAT NIGHT! I mean, obviously if you failed you should move on, perferably to somewhere the first girl cannot see you, BUT YOU DO NOT, EVER, HIT ON THE GIRL'S FRIENDS!!!

KAN*INAB*CHAOBYEBYE I am so pissed!

Can somebody explain to me why guys I am even the slightest bit mildly interested in always ends up liking my friends? WHY??

It is so RUDE!!!!! I cannot understand why men are so bloody self-centered all of the time.

I kept complaining to Vyasa and Martin after that, when we had supper at Spize, and the boys were sprouting out rubbish reasons like...

Maybe he thinks you are very kiasu coz you wanna guard the table, and nobody likes a kiasu girl;

Maybe he decided you are too short (because sitting down cannot see height);

(courtesy of Junne, to my fury) Maybe your dancing sucks;

Maybe he felt that he couldn't get you so he moved on (disagree: I was perfectly friendly);

Maybe he was talking to you to get to know Junne in the first place (KNNBCCB);

(Shuyin:) Maybe because he saw you dancing with Martin (oops)...

OR MAYBE HE WAS JUST A JERK. I dunno lar.

And due to his lack of respect, he gets no girls that night - not from our group anyway.

Le Coq, if you are reading this maybe you can solve the "Maybe" mystery and tell me why you would do such an evil thing.

Coz I am so chio, ok? In case you have forgotten, here's one bigass photo:

Men are so irritating!

post-note: Read why I am so paranoid/pissed about guys liking my girlfriends.