It seems that my haters are rejoicing in a recent newspaper article about me, which... stated that I was "dropped by (insert tabloid) as a columnist as she didn't meet the editorial standards required of our freelance contributors." 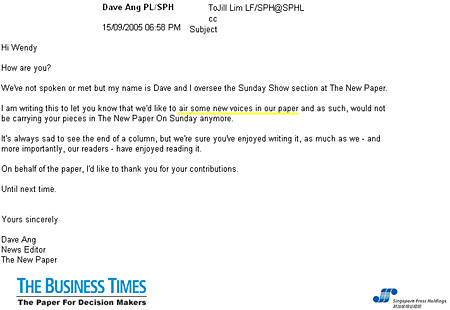 Upon receiving this email, I received a phone call from said editor, who wanted to personally notify me.

I asked specifically if it was because I didn't write well enough that I was removed as a columnist.

He, at that point of time of course, rather sincerely and kindly assured me that that is not the case. He said that TNPS changes their columnists every few months or so, and with the exception of a few of the older columnists, most of their columnists don't last for long.

I was relieved, and told him I thought I didn't write well enough. He laughed and said that was not the case, perhaps the only problem was that we did not work out more specifically a topic to write about, so the topics are a bit scattered. If I have any suggestions for what to write about, he added, I can always suggest to him, and in future, we might work together again!

SPH can try to sue me for this. I am prepared to swear in court that this happened.

But of course, we can all argue that this certain editor was only patronising me at that time. Dishonesty in either way. :)

That's all I want to say! I suppose the more intelligent of you would understand. Those who choose to dislike me will always choose to believe the worst said of me, even if it is said by a source proven unreliable for years, and I guess I cannot do anything about that.

On a totally irrelevant note, because Harry Potter is such a fabulous book, I'd like to quote Hagrid, on his opinion of Black betraying the Potters (POA):

"Filthy, stinkin' turncoat!" Hagrid said, so loudly that half the bar went quiet.

I forgot to mention I won't be allowing any comments for this article.
- December 14, 2005
Newer Post Older Post Home