Showing posts from January, 2006
Show all

- January 30, 2006
ANG POW ANG POW ANG POW! MAHJONG! BAK KWA! I'll blog more tonight, I was so damn exhausted! Cleaned the house till 7am on chu xi, and woke up at 830am. Damn. So today, chu er, I overslept and now am very late for going to my auntie's, where I am missing some serious mahjonging sessions. I've gotta rush. My grandpa is very funny, he is so grumpy he swatted my cousin when she took his bak kwa to eat. AND THE IRONIC THING IS SHE BOUGHT THE BAK KWA! Wahahhahahaha! OK, laters. Auntie angry.
Read more 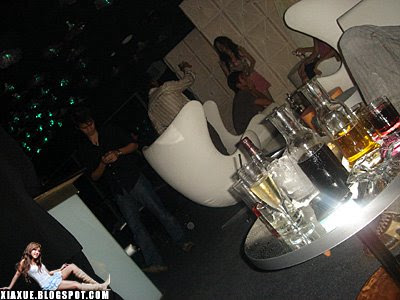 Yesterday I went to MoS (yes again) with June, Kelvin and Kit, and I decided to call my daughter Taittinger, after MoS's uber VIP room the Taittinger Sky Lounge. I know I've said this before, but this time I stand firm in my resolution. ROARRRRR! If I ever get married, of course. Now, there is a problem. If I want a name like Taittinger, I cannot marry men with awful surnames coz Taittinger Neo just sounds damn wrong! It sounds like a loser chick, right? Taittinger Gooi is damn bad, Taittinger Tang ok, and Taittinger Leong is fine too. Sad huh? Or maybe I won't marry Chinese guys then, a French surname would be beautiful! So anyway, as I was saying, my daughter will be Taittinger, and my son, I wanna call him Prestige. I know most of you will be sniggering and saying it is the mercs cab's brand, but so what? If I am rich enough to be buay paiseh and call my son Prestige, I will buy over the bloody fleet of mercs cabs and rename them to something else. I don't
Read more

A guide to getting your comments published

For the life of me I cannot understand why people who are ridiculously stupid can manage to apply for an internet connection, turn on the computer (while having it fixed up too!), perhaps enter a password, and then use a browser to log on to my website, and then leave comments. To me, the steps seem pretty complicated, and I know that some readers have the mental abilities of a 7 year old. I don't know, would a 7 year old know how forms and hyperlinks work? All these are very amazing to me. Some I imagine to be so stupid, I sometimes get hit by a mental imagery of them walking over the edge of a very high cliff. BOOM! Off they go! Like they are talking to their evil cousin or something, and the cousin goes like, "Eh, let's see how far u can walk backwards!" (which is towards the edge of the cliff of course) and the idiot goes like, "OK!" and he guffaws his underbite smile and promptly drops to his death. ("SEE COUSIN, SEE, I CAN WALK VERY FArrrr...
Read more

Just a lot of photos 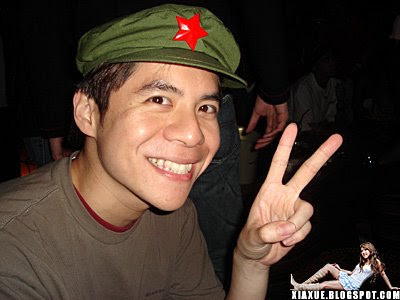 Shan's birthday at Balcony and MoS! I took lotsa photos. :D Happy birthday Shan Wee! I don't know about you, but I think people who are tall should be disallowed to wear hats. It makes them even taller, and I think, whenever these tall people like, wear a hat, have spikey hair or wear heels, there should be an apt punishment. Like making them walk on their knees for 2 weeks. But anyway, Shan's party was hat themed. -_- With his 1.9 frame you can see his hat bobbing around in a crowd from like 2,000,000 miles away. Howard, as good friend, wore a hat as told. Daphne and me Tall people with hats, Shan and Christian. Grrr Jeffy (guy with look of surprise) with Shane and his girlfriend. Shan attempts to take a photo of me but I caught him first. :) Clear view of nostrils. Looks clean. I think long lashes on men are wasted. They should be given to me. Yas is my favourite DJ, sorry Shan. Daniel and Jaime. Jamie? I have no idea which is the correct spelling
Read more 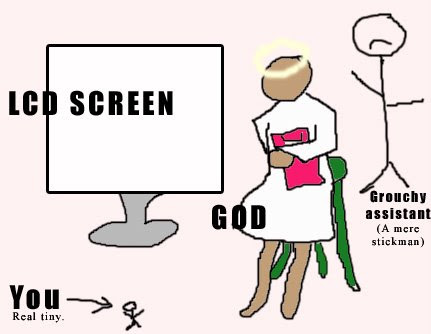 I was just thinking of this question the other day... Although I don't believe any religion, I imagine that when I die, I will go up to this place, and it is kinda like immigration customs. (The reason why it is up and not down is because the place is full of light in my imagination... So yes.) Now a superior being, I shall, for convenience's sake, call him God, will be there, judging everyone about the life they lead before they are banished to hell, or promoted to heaven. One by one people queue up for their turn, and God will be sitting there with this clipboard and a grouchy looking assistant beside him taking notes. There you see? Just like that...! You know, credible newspapers and all have said I'm racist (I was next Hitler, they imploded!), so in order to refute that once and for all, I have drawn God with an ambiguous brown-toned skin. It is said that in time to come, every race will fuck every race, so we will all end up this colour. You may once again
Read more
More posts