Hate-site owners and their day jobs

- January 10, 2006
I was half asleep today on my comfy bed (great weather, woot!), and suddenly I wondered about what jobs people who set up hate sites do.

I don't mean the one-off kinda blog entry, I mean people who really do up a new URL, and post up rebuttal entries regularly, solely to insult someone --- especially when the someone did nothing to offend you in real life.

I mean, what the fuck man, do you think my most ardent hater is, I dunno, a zookeeper or something? Damn funny isn't it, if he is bathing some elephant and thinking of ways to generate more lies about me?

LOL... Zookeeper. The thought amuses me.

I was just lolling around, still sleepy but smiling a bit, when a giant mascot of JollyBean came up. 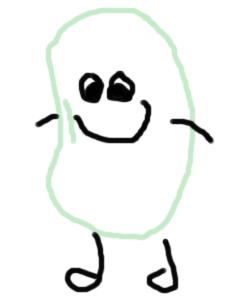 Granted, Jollybean has never employed a giant green bean mascot to my knowledge, and I am not even sure their logo looks like this, but that's how the creature appeared in my head.

It was walking around Funan the IT mall, and had to give Jollybean balloons to the little kids.

Then it hit me.

I mean, what else can make a human more grouchy and hateful?

Imagine how it is like to be inside a damn bean costume the whole day? And while you know you are not a bean (you are a human bean, guffaw!), you have to tolerate the idea that some kid somewhere thinks you are really a bean.

In fact, the kid might even wanna grind you for soy milk.

Sigh! I mean, that's not even bad enough. You have to parade around in a heavy costume, and as if the backside of the bean does not make you look fat enough, you also have spindly short legs and your hands stick out awkwardly like chicken wings.

AND THEN KIDS TRY TO TOUCH YOU.

They trottle over, thinking they are so damn cute and all that, and gently pat your bean ass, looking up into your fake bean eyes.

Sometimes, the older ones thump you, wanting to know if you are hollow. They then laugh, whether or not you are, because they know that if they study hard enough, they don't have to grow up to be a bean.

I've never seen this happen to a real mascot before, but I imagine that if a strong enough kid pushes this bean mascot, it will fall to its side, and roll around infinitely.

We are assuming that someone will come and save the mascot, pushing it the right side up again, but THEY WON'T! Because it is too damn funny.

Oh well, maybe they might, but only to push it over again.

So there the bean rolls around, its spindly limbs unable to do anything, and finally giving up, thinking, "Fuck, not again."

It rolls to a stop, and then what happens?

It hears a voice, and it is the bean's ugly girlfriend (the best mascots can get for their low sex appeal. Don't take my words for it. In the Durex Sex Survey, Models were ranked the sexiest occupation, and mascots, the least).

Sadly enough, the bean had rolled to a stop at his girlfriend's feet.

"XLX," she whispers, mortified. "Is that really you?"

She averts her eyes at strangers, who are still sniggering at the sight of a rolling bean.

In a dramatic move, the ugly girlfriend stomps away, crying her heart out. I know it sounds illogical, but do not ask me to fathom how ugly girls function, I have never been.

So yes, stomps off, you know, in the typical hands-wipe-tears, long-hair-fly kinda move you see in shows, except ugly.

In a horrible twist of fate, the bean's final rolling position is the same direction she is running, and he has to look at her flee in horror, her butt wobbling in embarrassment.

The shittiness of his job finally sets in, and he decides to write even more about a random happy person (I think I'm the happiest blogger around, actually), because HAPPY PEOPLE ARE EXACTLY THOSE WHO MOCKINGLY TAKE PHOTOS WITH MASCOTS! 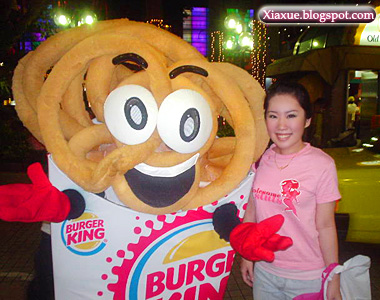 We all never knew hate site owners have such a sad life, but they actually do.

Imagine, everytime someone wants to fuck them, they think of the mascot costume (bean or otherwise) and get all flaccid.

I know I won't fuck a Jollybean.

Nor this sad, sad looking pack of onions rings.


Editor's note: Wow, read the comments to see the amount of people without a sense of humour!