Ladies and Gentlemen, I present to you, Orchard Road. 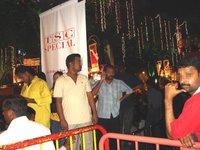 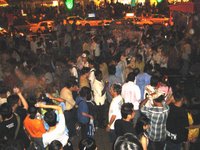 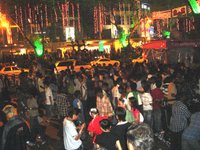 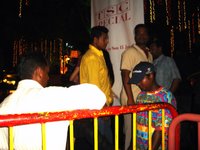 Feel free to click on the photos to see the percentage of Singaporeans vs our dear foreign workers.

When I blogged about them, I had no idea how serious the condition was, until I approved all 500 comments, of which around 70% contains stories of girls being molested.

When so many people concur, it is no longer a problem we can just neglect.

I HAD to go to Orchard this year because I was invited to the "Get the Funk Out" party, which was at civic plaza.

Stupid me, I thought that I could go to Civic Plaza through Taka and Wisma, but was horrified to find out that the passageway was CLOSED!! (Ignorance is really terrible)

I walked out of Orchard MRT to meet Shuyin and June, and was more horrified than I ever was in my life.

Girls were huddled tightly around guys, the male ratio to female was 10:1.

Only I was alone.

And the men, Singaporean guys included (though much less), were mostly armed with aerosol foam.

IT WAS NOT FUNNY.

If you think it is funny, please try to imagine the foam on your face, sprayed by a stranger you want no dealings with.

I met the girls a little later, and luckily for us, Idris drove us to Meritus, and we had to walk the distance to the 7/11 outside Civic plaza.

Once we got down the car, we immediately got sprayed.

The distance to Civic was PURE HELL. Immediately all my trauma from my past experiences came flooding back, and I was so fucking scared to be surrounded by so many of them!! Luckily for me, SY was in front of me (she is super brave ok! She kicked the workers when they sprayed her or were too close, with her pointy boots!) and Junne was behind me.

*sobs* [Both my friends said my top was too revealing and an easy target, thus they both tried to protect me (instead of themselves), which was so damn sweet. Thanks guys, you are really hao peng you lar!]

I never ever wanna go back again!

Junne got her ass groped (grrr! FUCK YOU, UNDERSTAND, I HOPE YOUR FUCKING TESTICLES DROP OFF), but SY and I escaped unscathed...

The worst comment I read, was this girl who actually had a foreign worker insert a finger into her vagina.

Yes, it actually happened. According to her comment, the finger went "in once, out once".

So Junne, having your butt groped is really not that bad afterall.

When we went out from our party (felt really good not to have those fucking foreign workers there), we walked along and kept being sprayed at, until we reached a group of teenaged bengs (around 15-16 years old), and tagged along behind them.

Their leader was spectacular, I tell you.

He was botak and rather stout, and the four or so boys had two girls with them, whom they were protecting with all their might.

Botak leader walked in front with a swagger, and when the *cough* (I am dying to use the B word) foreign workers sprayed at their girls, Botak would run towards the FWs and shout at them.

Blindly, I held on to the back of his tee, seeking some protection, and he never once turned back to look at me coz I think he really was used to unknown girls being behind him already. Plus, he was always too busy shouting.

Wow, I never knew 16 year old boys can be so heroic.

During a particularly heavy spray, Botak walked towards the FWs (foreign workers) with his chest out and chin high, and shouted,

"WHAT, YOU THINK SINGAPORE GIRL VERY NICE TO TOUCH IS IT?!"

and on that note he chased the FWs away.

Man, he was great.

He and his friends were walking behind their two girls, and they basically protected SY, Junne, another girl (SY's relative we met), and me through the distance, though they were too busy protecting their own girl friends to really communicate with us (but we know they know we were there coz SY's relative and I were both tugging their tees for dear life).

One of Botak's heavy-set friend, the strong silent type, actually went behind the group of us girls, and said in Chinese, "Don't worry, I will be behind you all."

And we didn't even say thank you to these bengs coz we stopped and they moved on so fast.

If you are reading this, and you are the Botak beng who was walking from Civic Plaza to Meritus with a girl tugging your tee, thank you, and your friends, so much for shielding my friends and I.

I expect a ban of these foreign workers from Orchard or City hall is not going to happen, so I am gonna petition for the next best thing: The banning of these aerosol foam sprays.

You may think I am ridiculous, but if you are not a teenaged girl who went to Orchard on NYE and Xmas Eve, you don't know anything, so shut up.

You have no idea how serious the situation is.

Being blinded by foam, and then molested while you are struggling with the foam on your face - how's that for Happy New Year?

What is chewing gum? Chewing gum is nothing compared the harm of these foam sprays.

You think you can protect yourself if you are with a guy? Or if you are armed with say, a nail file or something?

Well, I doubt it. These sprays can be sprayed from a distance. Even if you want to whack the person who sprayed you, you will be too damn far away.

If you are a victim, or the boyfriend/brother/father of a victim, please help me in signing the petition: