- February 05, 2006
Sometimes this blogging thing gets so overwhelming, that I forget the simple pleasures I get from this blog.

One of the reasons I blog is before it is so damn cool to be able to look back at how you looked like and thought like in the past!

A few weeks back, Weili baked some soft (by soft I mean it can't really stand up straight) cheesecake, and I told him he had improvement already; the one he baked in 2004 melted so bad, it was considered to be a liquid state.

Weili denied that he had ever baked such an atrocity before, and I rolled my eyes at him and confidently said, "YES YOU DID, I EVEN BLOGGED ABOUT IT!!!" while pulling out a bit of hair.

With this he went, "Really meh?" in a meek voice and I said to him that I will prove it to him tonight. Which I did - by searching my archives!

I started the blog in April 2003.... It is almost 3 years now! It is really kinda sweet to know that I have friends whom I have been blogging about throughout all these years. :)

I was feeling bored that day, so I decided to do a growth chart for Shuyin and me... since August 2003 - which is the earliest pictures the blog has. 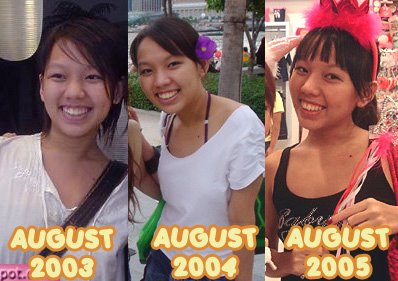 She used to have such chubby cheeks! I think she looks a lot nicer now...

And of course... Myself: 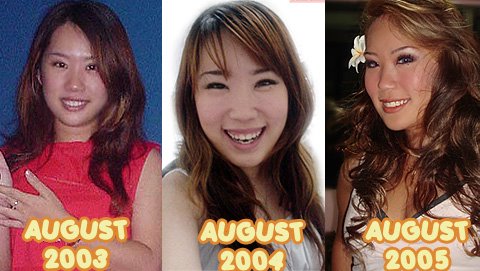 Think it's the tan and lighter coloured hair. Hahaha... You know what the funny thing is? At every point of time in my life I've always thought I looked the best I ever could.

For example in 2003, I used foundation, mascara, curlers, blushers, dark eyeshadows, lipsticks and eyeliners. I thought that was all the make up you can ever put on ur face, and so my face was the best looking it could be. (Clearly, as you can see, is not true)

And I also had curly long hair which was dyed a shitty shade of brown, but I thought, that must be good enough.

But as I grew older I discovered more and more things...

I realised there are hair dye colours which suit you more...

And plain mascara is not enough - there is also the sort with white fibres in them to make lashes even longer.

And then that sort of mascara is not enough too! Eyelash extensions are even better.

And nowadays, I don't even do extensions or mascara - I just put fake lashes.

Eye colour? Never thought in 2003 that coloured lens can make my eyes look even more captivating!

Even if I wanted black eyes, I'd also go for the Big Eye lens. :)

So in conclusion, I think there quite no limits for beauty. I often wonder why girls sometimes don't bother to doll themselves up.

I mean, it is not even an issue of vanity for me anymore! I just have seen myself prettier, and I cannot drop my standards and allow myself to be uglier than I know I can look.

Just like if you scored 90 for an exam and you take the same exam a second time, you won't allow yourself to score 50, would you? Because you KNOW you are capable of a 90.

(For example that day I didn't bring eyelash glue out and I had to put mascara instead. Although my natural lashes are pretty long as it is, mascara just didn't seem good enough!! I felt so unhappy the whole day. BAH!)

I know this entry is very pointless.