- February 05, 2006
Today I was excitedly telling Shuyin and June that I found this old song of Aniki Jin (Jin Cheng Wu? Takeshi Kaneshiro?) and I am very happy about it.

And I started skipping around and saying how handsome he is... *blush*

I mean, he used to be like the cutest ever when I was a mere teen, but as he aged he started to have this funny quality about his eyes, like they are a bit too sharp at the edges... Ok, fine, I don't know what I am talking about.

But it remains true than he used to be like so fricking cute in the 1990s! 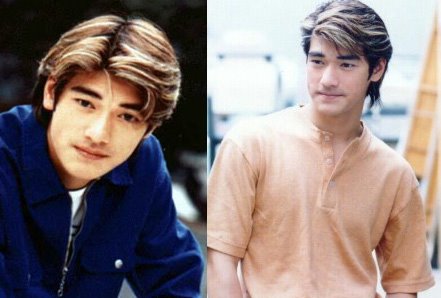 OMG I HAVE TO DIGRESS!

I suddenly realised why I no longer think Aniki Jin is as cute as before! Look at his brows!!!

Now come to think of it I realised I totally have a weakness for guys with eyebrows shaped like the chinese 8! I KNOW, RIGHT??! It gives them the puppy-eyed look, and I totally melt, I tell you.

Oh shit I just realised my favourite ex had ba zhi mei too, and so does the last guy I liked for a good six months.

OH GREAT. A great revelation discovered when I am blogging nonsense. All this while I thought what's so special about these guys that make me like them so much, and actually it was all in the damn eyebrows.

It is that simple and that superficial.

I am beginning not to be able to stand myself.

Back to Aniki Jin.

As I was saying, his eyebrows are no longer in that wonderful shape. 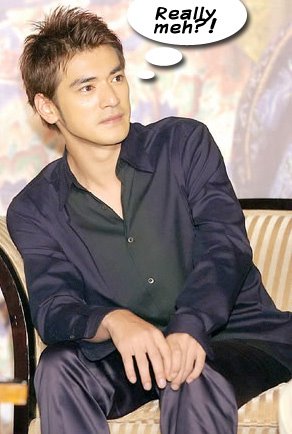 But of course, he's still suave and everything, but just no longer that adorable, you know? But then again if he is so old and still cute it will be quite frightening. 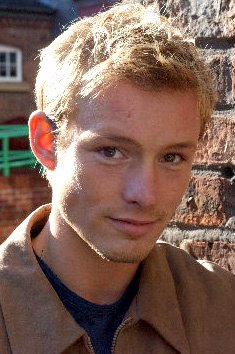 I should just be happy he is still in showbiz... I used to like this singer called Adam Rickitt coz (GUESS WHAT?? I'm SO predictable) he also had the puppy-eyed look... and coz he is so blonde.

But no one knows what the hell Adam is doing nowadays.

For all I know he may be a lumberjack.

All I know about him in like 1999 was when Eileen asked me to watch this MTV called I Breathe Again where Adam Rickitt was posing nude (he was an alien of some sort I think!) and I started hyperventilating.

But he is gone! I think not too many girls share my love for ba zhi meis. Sad.

Just after I skipped around saying how handsome Aniki Jin is, Shuyin just said, "Too bad lor, he is gay."

I jumped onto Shuyin and attempted to throttle her to death for sprouting rubbish. IT CAN'T BE!

Breathlessly, Shuyin pushed the blame to June and said it was June who said so.

June shrugged nonchalantly and said that she had a friend who dunno what dunno what met Aniki and "had the vibes" and "can see" that he was gay.

I was like, "Duh, that's totally not reason enough for you to think he's gay right?!"

Once again she shrugged and Shuyin said, "Well, all these years he's in showbiz, he had not had any scandals with girls!"

I silently thought, But neither with guys! but I kept quiet.


Just now, I was about to go to sleep when I thinking about nonsense as usual... This time I thought about if I had the chance to have sex with ANYONE in this world, who will it be?

And then my thoughts wondered to Aniki Jin... 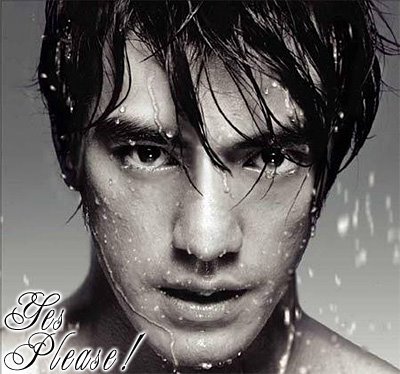 Heehee... I'll make him sing to me first before sex, act out a scene in Chungking Express, then during, I'll make him sprout Japanese and make those grunting noises that Japanese men like to make... oh yes the wet look is not bad too... heeheehee OOPS did I just write those out loud?

Just as I smiling to myself, there and then I FELT THIS IMMENSE, IMMENSE SADNESS OVERWHELMING ME!!!!!!!!!

He is gay and he will never like me!
It is crazy to be so sad over such a stupid thing!

I know I'll possibly never ever really get to shag him, but I'd love to still at least have a bit of hope about it, right?

I mean, I want to, as I put on my make up, think to myself, "Wow girl, today you look great! Maybe today you will see Aniki Jin and he would want to have sex with you."

I would hate to think that thought to myself, and think continue with the thought, "Yeah right, as if he would look at you even if you flashed your pussy. He likes dick."

It is so shitty it makes the world around me so damn sad.

I look at the willowing Pandan Reservior trees and think of them as freaks of nature with lots of fungus and diseased bark and worms on it. I look at a bar of Calbury chocolate, and see only fats. You get me?

THAT'S HOW SAD IT IS TO HAVE A GUY YOU LIKE BE GAY!

I mean, if he is a mass murderer you can tell him, "Hey, cut it out dude. Stop the mass murdering shit... I wanna love you."

If he is an awful singer you can just ask him to stop singing. BUT GAY!

That's just sad coz he won't even care what you think!