We brave the terror that's Yangtze

That day I got onto a cab and told my cabbie, "Uncle, Yangtze cinema!" and he looked at me quizzically.

I blushed immediately and jumped into self-defense mode, saying, "I'm just going there to watch a movie with my friends!"

Anyway, to those of you who are unfamiliar with Yangtze cinemas, it just about happens to be like the last of the olden cinemas, where movie posters are painted instead of printed, and flooring is wooden instead of carpeted.

You'll possibly notice it if you go to Chinatown.

The majority of young people nowadays can't be bothered about Yangtze (called YT for short from now on) coz it only screens bloody RA shows with damn cheesy names and only lao ti kos (dirty old men) watch those movies.

My lecturer told me last time that these old men always bring umbrellas into the theatre. Most of us couldn't understand why, so we badgered her to tell us, but she just flush crimson and refused to say more...

So anyway, Wanyi and I have been talking about going to Yangtze to watch a show for a gazillion years, but Shuyin usually rejects us in her usual high pitched voice, saying it is "so er xin!" that the uncles wank into on the chairs, etc.

Which is true lar, but still, it's an experience of a lifetime man! I mean, I think YT will really close down soon, and we must catch it before it does!

That's me on the cab there... Sorry, I realy couldn't resist the urge to do major photoshop on the photo coz it looks so tak glam to take pictures in cabs. Haha!
We decided it's not really safe so we go Zhengchang and Alvin to go with us.

Shuyin saw a movie title on the papers and we decided to watch that...

GUESS WHAT IT'S CALLED?? 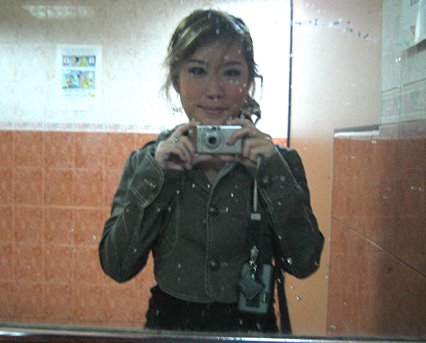 Had to don on a jacket, Alvin Lam says I look like a prostitute and will get approached by old men. Bleah!

Actually, my reaction to that was that it would be great! Then I can put on a fake China accent and charge them $10,000 for squeezing a boob of mine. Haha... See, I'm so addicted to blogging. I think getting approached by old men would be great blogging material. 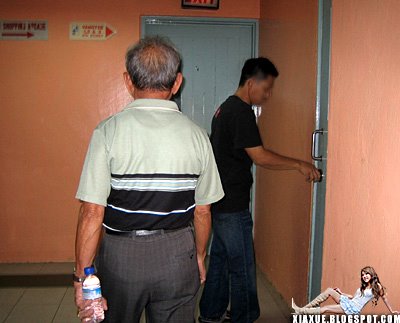 We follow the dirty old men into the ticketing area... Water bottle? Teeheehee 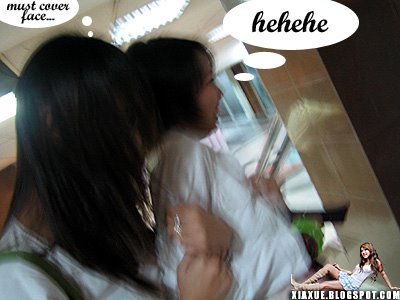 Wanyi is very traumatized, but as you can see, Shuyin is very excited. She is lecherous. She is very excited about watching womb raiding, because she loves wombs. 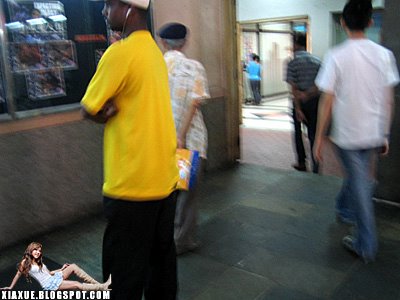 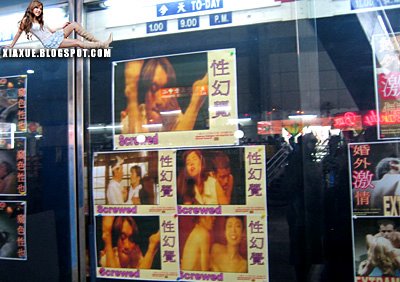 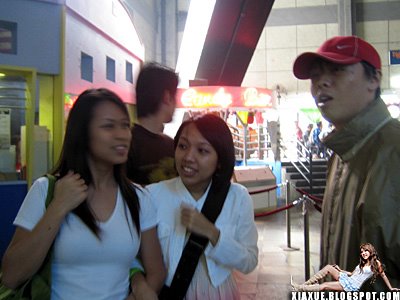 Heeheehee... It was so exciting...! Exactly like how you imagined it, there were only middle aged uncles milling around.

Shuyin's grabbing her jacket coz she is scared a random uncle would go up to her and OPEN HER JACKET, shout, "GREAT TITS!" and then fondle them a bit while wanking happily. Heeheehee

We then shove the guys to go buy tickets... 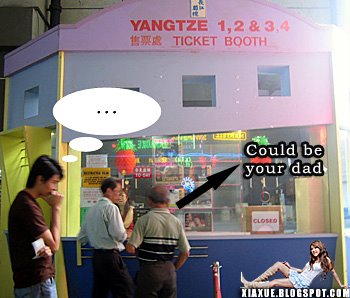 while, as you can imagine, we giggled in the corner, laughing at the old men.

I told Zhengchang to pretend to be my photo subject, but actually, all I was shooting was the guys behind... :D 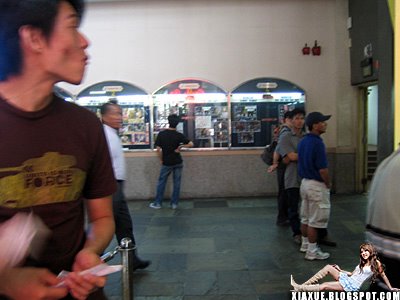 Alvin, buying tickets, "Can we not have anyone sit beside us please?"

Wow, look at the tickets! 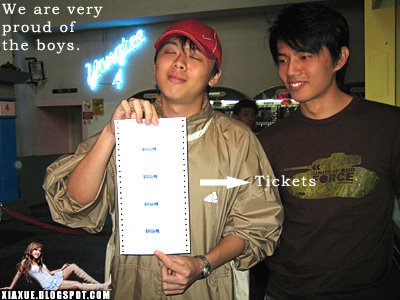 We had to choose another movie coz Womb Raider was unavailable... 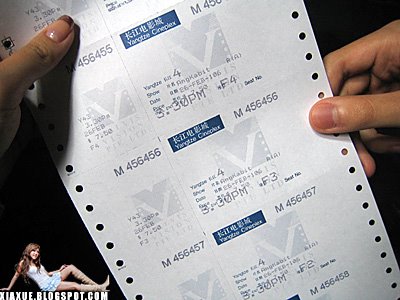 It is called "Er nai de qing ren"!!! LOL! Loosely translated, it means "the lover of the mistress". WTF!

With this we go into the cinemas, the girls not wanting to touch anything... 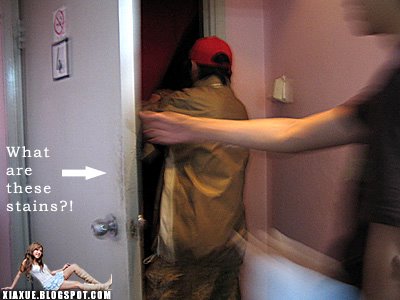 You just kinda start wondering what all the yellowish stains are...

The theatre is really not as bad as we thought it might be! The seats are velvet and quite cleanish looking, and the theatre is just small, dark and dingy.

Story plot! This is damn funny.

The movie starts with this girl (great tits) fantasizing about fucking on the beach, and then we have this landlord guy, who owns like a big piece of land in Philippines.

He is wheelchair bound, and his wife is the fantasizing one, but he also has a nurse, who has to do physio-therapy on his legs, to get him to walk again.

The wife, being bored and all, begin exploring her husband's land, and found herself this stud who fucks her like in all her fantasies.

I don't know about people living in 3rd world countries, but MY sexual fantasies all involves high-tech rooms in pure white colours and various shiny brushed metal machines. Beautiful people would be milling around naked... except... heehee... they are all ROBOTS! We would be in this gigantic spaceship travelling at the speed of light...**

She, on the other hand, fantasizes about being screwed in a hay field, flower field, open sea, etc. You know, the old-school, cheap fantasies. (Mine are all over million $$ to produce)

HAY FIELD?? Bugs. I hate bugs. What if they crawl into your...

Ahem. As I was saying, so both of them screw other people, and this drags on for the longest time, and involves certain really dumb scenes such as the landlord actually shitting on his bed and the nurse cleaning him up...

On the white bed was an actual turd and a pool of brownish water around it. -_- That's about the most unsexual thing i've ever seen in my life.

I don't know about other girls, but if I see a man shit his pants I don't think I'd proceed to blow him. *roll eyes* 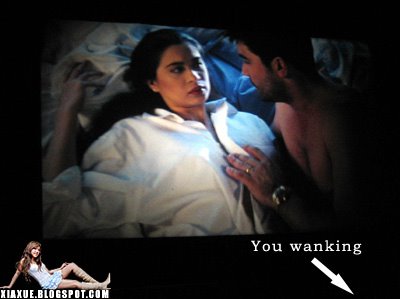 She's a great nurse.
There was this one scene, where the nurse bent over to mess with the bed sheets, and the landlord, man boobs in wheelchair and all, pinched her... erm, on the genitals. WHAHAHAAHAHA I TELL YOU HER EXPRESSION WAS CLASSIC.

It was half pain half agony...! The man looked on in perverted glee, and asked her, "WHO'S YOUR MASTER!?"

I believe she looked at his penis and answered him in a totally predictable answer.

WE SAW A GUY WANKING!

I mean, we didn't SEE him wank per se, but he was sitting in the row in front of us, and his head was bobbing up and down, his chin tilted up, and his mouth slightly agape.

If that's not wanking I don't know what is.

Oh and after a while, while we all were laughing at him, he erm, climaxed. It was so disgusting!!!

All around us we heard plastic bags tinkling and zips being unzipped. Worse of all, there was ACTUAL LOUD MOANING!!

Can you believe it?! I mean, moaning?! HELLO!? How much more indiscreet can you get?

And I tell you, the uncles there are EXPERTS. When the last sex scene ended, they exited the cinema, coz they knew the rest of the show would just waste their time.

Which is true. In case you are interested to know the ending of the show, there is this crazy looking half blind teen in the show, and his name is Nelson.

Nelson was a spy for both sides... Naturally the landlord was very unhappy when he found that his wife is cheating on him, so the wife told (and paid) Nelson to tell the landlord that she and her lover would elope at a certain time and place.

The landlord took his shotgun and went to the place, and shot who he thought would be the lover, but obviously... make a guess!... it was Nelson he shot dead.

Duh. Why would Nelson go to that place?!

So anyway, the wife met her lover at another place, the most irritating of all, the man refused to leave with her!

WTF! He wanted to stay on being a farmer or something!!

HOW IS IT POSSIBLE HE STAYS ON WHEN THE LANDLORD WOULD KILL HIM!? And after all that trouble he wants to stay!

So well, the wife escapes by herself, and the landlord gets convicted... Flash to scene of the wife in the city, and whilst in an urban crowd, she once again fantasizes about fucking on a beach. 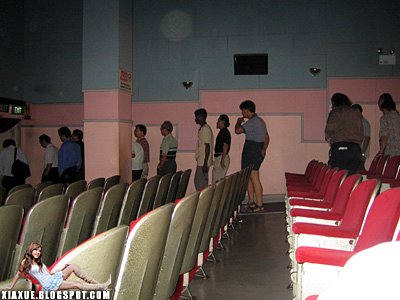 (Check out the high-waisted pants uncle. We saw him pull up his pants at the end of the show.)