Mac evangelists are so TYPICAL.

Firstly, contrary to popular opinion by idiots (really, intellect is GROSSLY underrated), I do not dislike Apple products.

How am I supposed to dislike Apple products when I have never used one in my life? I mean, of course I have used my friends' ipods sometimes, and they have never exploded in my hands, ignited into flames and subsequently singed my eyebrows, so I doubt there is any reason for me to dislike them.

Haha the image of an ipod exploding in my hands and scorching my brows just made me laugh hahaha imagine that.

Back to the angry topic.

I do not dislike Apple products. I am indifferent to them. They do not affect my life, and even their store is at Wheelock minding it's own business (ha, clever pun Wendy!) so it really doesn't affect me.

WHAT I DISLIKE AT THE IDIOTS WHO GO ON AND GO ABOUT APPLE.

Another accusation I had is that I claimed that everyone who uses Apple is a loser.

Now, if that is true, when you see Momo around, please shove an ipod into her hands and say gently, "Auntie, please use this!"

With this, you have effectively made me call my mom a loser and that would make me very angry with myself.

Unfortunately you can never do that before I have never said that EVERYONE who uses an ipod is a loser.

I am only talking about the people who buy ipods simply for the sake of appearing cool, to compensate for their deformed genitals and thus, lack of confidence.

If you are not one of these losers (check your genitals to confirm), then stop bristling over nothing coz I AM NOT TALKING ABOUT YOU.

How do we identify an Apple loser then?

While Microsoft have never done anything truely damaging to him, he feels the absolute need to put something down in order for himself to seem superior.

Typical Apple Losers will tell you that PCs have a lot of viruses and his iMac/iBook is perpetually stable.

When you loosely mention that it is very fun to nudge people on MSN and that macs can't do that, an Apple Loser will sneer and just walk away with his chin up. While rolling his eyes and listening to his godly ipod, of course.

Oh, you wretched thing. It is so sad that an Apple Loser now thinks that you are beneath his higher existence of mere MSN nudging.

[ Big digression: Speaking of MSN, I cannot understand why MSN would provide Apple users with their product. Let them go talk among themselves all the time and see whether they still wanna use Apple computers. I know, I know... Apple people will just transform MSN into Apple-friendly themselves, but still, at least let them do a bit of work, yeah?

Potential iBook buyer: How much is this iBook?

PiBB: Oh! WHY??? Omg! Is it because MSN belongs to Microsoft?! I think I shall stick to PCs!

Coming back to the "virus" situation of why Apple products are so way superior to PCs, I would like to give this analogy:

Really ugly girl: "I have no STDS."

It doesn't mean much, really, if you don't get fucked simply coz you are less popular. If Mac evangelism came true one day (bless us all), and Apples ever got as popular as Microsoft did, then come show me you don't get viruses, and I will say yes, surely you are superior.

Just like Microsoft has killed his entire family, the Apple Loser (man, I should trademark this), ahem excuse me, the Apple Loser® acts like Mr Sim ate up his iPod and forced him to use a Zeeon. 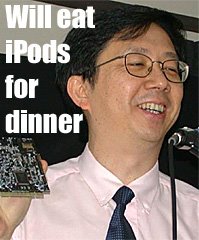 Apple Loser®: YES! Never! Even if I get sodomised! *gets secretly excited*

Sim: Why are you dressed like that?! Anyway! *proceeds to eat up iPod*

Kudos to them if they can copy your product and sell it for a better price. If you find that so unjustified, go sue.

Or or you know what they can do? They can go copy some soundcards, and sell it for a cheaper price! Woohoo! (Hear the Apple losers® go like, "But Apple is better than that!")

Whatever man, it's just an mp3 player. Chill.

Inferior quality for a cheaper price? That qualifies it. Shall we now move on to features?

Specs taken from here and here (I chose players where both are 30 gigs):

I think this is enough said. I really don't care if Apple compensates in other ways like being more stable/hardy/has other functions.

My player is sponsored and I really don't need to give a shit about such things. The only reason why I am comparing specs is to prove to you mac evangelists that iPods are not just as perfect as you think it is.

Having no other life than to be a slave to a piece of machinery, the Apple Losers® will risk leg and limb to quarrel and sever all friendship with whoever insults his Apple products.

I find it very ludicrous that people actually think that if Apple were to sponsor me with an iPod, I would be writing bad stuff about Creative.

Well let me tell you this...

I won't, firstly because I have been using Creative before I got my vision:M, and that would make me a big idiot if I suddenly switched to Apple. Secondly, I support local products and I am proud of Creative.

Right from the very start I have always wanted to be endorsed by Creative (I am not), and never Apple. That's because I won't accept products endorsements that aren't ME. That's just so hypocritical. That would mean, if Apple were to give me their best player now, I'll possibly reject them.

Apple is no longer just a brand name. It's a religion now. The funny thing about religions is that you kinda just can't insult it nor even doubt it, or people will get angry and start massacres or burning Danish flags.

If you still don't get my point, here's the Scientology episode that was banned - spot the similarities.


Mike: "Hey baby have you heard about the South Park episode? It is now banned! I think there is a case called "Scientology VS The Internet". They are sueing the internet!!"
I don't like religion. I think it causes way more trouble than it's worth.

Postnote: Haha, check out the mac evangelists yapping away in the comments!

Yeah yeah, I am a product whore (so dumb, if I were a product whore I think I won't be talking like this about Apple Losers coz I won't burn bridges...), Creative paid me to write this entry (WHICH THEY DIDN'T), I am ignorant (I have used a mac in school previously for design... It is a $10,000 iMac which hung all the time, and everyone hated it), and I am being malicious for the seek of getting attention.

Every other reason they can think of... Except one: That it's true they are fucking annoying the shite out of people by preaching about Apple all the time.

Stop going on and on about how mac is superior and how you can now use Windows on a Mac.

The bottomline is: I DO NOT GIVE A SHIT.

What I care about is I make my stand clear that Apple preaching is annoying, so stop it already.

Amazing how successful marketing can turn the common lemming into a complete brainwashed idiot.