Mike drove us to Dallas from Lubbock (that's where he is staying at right now coz his college is here) to visit his family, and it is a 5 hour drive!

It is funny isn't it? I mean, Americans are supposed to be lazy and fat and Singaporeans skinny and hardworking, but Americans can drive on for 10 hours to go to a destination, but Singaporeans?

NONE OF THEM WOULD SEND ME HOME TO TEBAN GARDENS.

Jesus. How far can Teban Gardens be from anywhere? Like 40 mins at most from Pasir Ris? No one stays in Pasir Ris anyway, so that's irrelevant.

20 mins from town, and people with cars whine and whine about how far it is.

Teban Gardens is near ok, I have learnt that the hard way.

I think I will date only people who live in places where buildings are sparse from now on.

Think about it, if Mike will drive 15 mins to get to Walmart for a shampoo, then in all likelihood he would send me home all the time if he stays in Singapore. Isn't that great? Heehee.

Back to that road trip.

Man, it was so exciting!

Before we got on the trip I was asking Mike in a disgusting act-cute voice if we will be able to see rainbows on our way there.

You see, rainbows are very useful. Not only are they very pretty, but the inbred monsters I mentioned in the earlier posts (these monsters jump up at stranded road trippers and eat them) also hate rainbows, so they will tend not to attack when they see something so pretty in the sky.

*Cannibals hide till rainbow gets away*

So anyway, I like to rain questions on Mike, stupid questions like, "Will we see a rainbow/raccoon/ponies/cows/hail/tornados?" and typically he would smile and say "Maybe..."

What I didn't know, is that I have the magical power to make all the things I wanna happen happen.

First, we went past rolling meadows... with cows and horses on them.

Then after that, Mike nudged me on the knee, and said, "Look, a rainbow!"

I looked around frantically and caught a wisp of a weak ray. 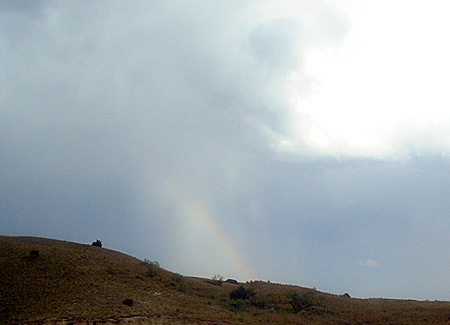 Mike peeked out of the window and said, "Yeah, isn't it? Maybe it will be stronger in a bit."

We continued laughing at it for a bit, insulting it's lacklustre colour.

I think out of spite, it shone a bit stronger. 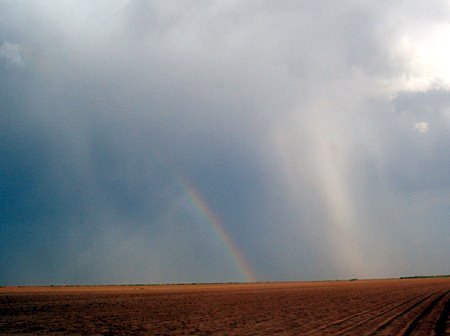 After that we looked on the right of the car, and I told Mike that we can see the other end of the rainbow too!

And it became this: 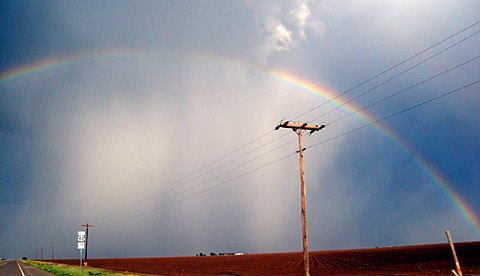 Imagine, we were driving along a road which stretches to the horizon, and so are the flat fields at our right and left.

The rainbow goes from one side to the other, completely unobstructed by any buildings of any kind, and it was like we were driving right under it!

I know I am making a big fuss over a mere rainbow, but I really don't see any in Singapore! In my whole life I have seen like maybe 7 rainbows altogether, and they are mostly small, weak, and obstructed. 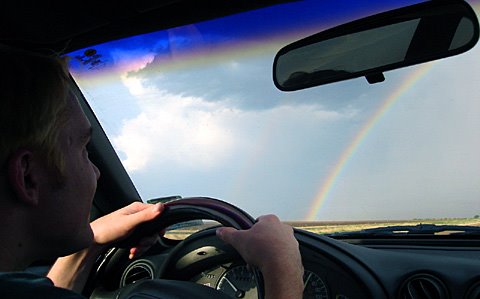 Fills me with a warm fuzzy feeling when I look at it.... Mmmmm...

It's not one rainbow! 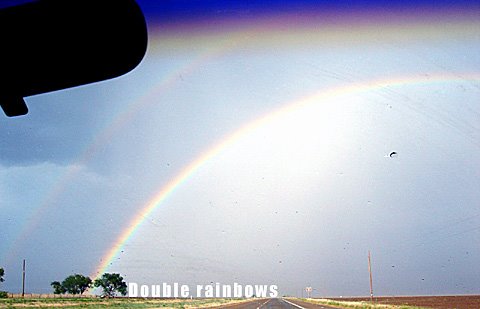 I am one happy girl.

We oogled at it for a while, and I had time to name it Rainbow Michelle, and then it disappeared.

We then moved into the rain which caused Michelle to form, and GOOD LORD!

It is not rain!

Small pieces of hard ice the size of a M&M peppered down on the windscreen and melted away.

Only lasted for like 10 seconds though. But wow, I saw hail! I have never seen snow before, and I jumped straight to hail. :D

Yes, I know hail isn't supposed to be good, but neither is a tornado, and you know you wanna see it. Well, those of you who have not seen it before, anyway.

After that, we hit nightfall, and I think we really unappreciate the beauty of stars in Singapore.

Singapore's stars SUCK coz we are like the most light polluted country in the world or something like that. What do we see when we look up? We see like 9 stars or something, and some are not even stars; they are satellites.

So Mike parked the car to the side, and we came out to look at the stars, and we were met with a pleasant surprise!

I got out, saw the field ahead of me sparkling, and was speechless for a while before I said, "OMG COME LOOK AT THIS!"

A field filled with MILLIONS of fireflies all trying to outshine each other.

It is like nothing I have ever seen before... the ground was sparkling, and the sky is sparkling. :D

"I think that's how nature makes us have sex, I think," I said. Haha. Food for thought.

On the way back to Lubbock we were met with a fucking scary storm though. I think it must have been a mini tornado.

The lightning bolts across the sky in a horrid nonchalant manner, and the wind was so huge it blew the car off course.

We could only see like 2 metres of road ahead of us due to the rain.

It was damn scary, coz we were in the middle of nowhere and had to drive for 30 minutes in that condition before we could stop for shelter at a gas station (which was closed).

Mike had to take a piss and he said the pee came out in a wavering 45 degrees angle because of the strong wind whahahahaha.

Alright, I think I will be more careful when I wish for weather conditions in future.

I can't believe I blogged a whole entry about WEATHER.