In the absence of my blogging I have lost all my smart and older readers and have attracted a new bunch of mindless teenagers!!!!!

It's very funny, I mean, I am only 22, but still a far cry from 16 year olds who will get affected by immature sentences like that, yeah?

You wouldn't go up to an old man, being all 13 or something, and say, "Youu r v ugliie N fAt!!!", expecting him to be affected by it, yeah? What makes you all think I will be?

The old man will just laugh at the naivety of youth.

I also find that the comments are mostly written by idiots, because once someone says something vaguely funny, everyone follows and writes the exact same thing, rendering it totally not funny anymore.

Funniest thing: There are people who wrote that I should not have put up a self-indulgent photo of myself during a 9/11 anniversary!

Should blog about melancholy and sad things! Should be more sensitive, considerate!

That's the most ridiculous thing I've ever heard for years!

Why don't you check a history calender before being happy every day? Every fucking day of the year we are in a war anniversary, considering how long wars can last - so how, every day cannot be happy is it? MUST MOURN AH?

I'd tell you what I did on 9/11: I went to Weili's birthday party, coz his birthday is 9/11! I drunk and ate and sang and was basically very happy when 5 years ago many people died!

WHO CARES, IT'S OVER, AND NONE OF THEM ARE EVEN VAGUELY RELATED TO ME. I'm not even American *roll eyes*. (Until my baby marries me! You know you want to darling...)

The Steve Irwin thing pisses me off too.

Everyone only knew he wrestled with crocodiles and possibly had the thought "Man, this person doesn't seem to treasure life very much" pass through their heads before.

But woah, die already, then must act like you are love him so much and he is your idol is it? Bloody hypocrites.

Thanks for telling me why the MSN tortoise and that he has a zoo. Thanks but no thanks, because I DON'T CARE. I care less now that he is dead. He was great, he was nice to animals and whatever. GOOD FOR HIM AND THE ANIMALS. But not even vaguely related to my life.

Why do you care? Is it because he was the buzz, and therefore you wanted to be in the buzz too, acting all passionate when all you know about him consisted of you watching about 1/2 an hour of his show your whole life? Don't you think it's worse to be taking advantage of his death than to not care about it?

Fuck off and die people.

At least the good looking ones, I would never know about the uglies. 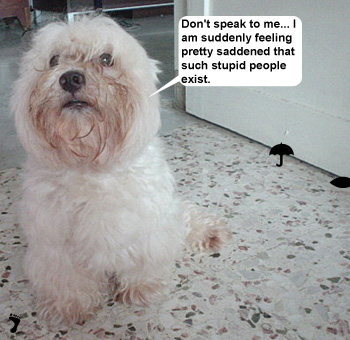 Cloudy is an animal, but even he doesn't seem very
affected that a great animal lover just died.

Yeah yeah his face is dirty. Whatever, pretentious animal lovers. This picture is way long ago, now he is all shaved.
- September 12, 2006
Newer Post Older Post Home