Am usurped; used to be hottest 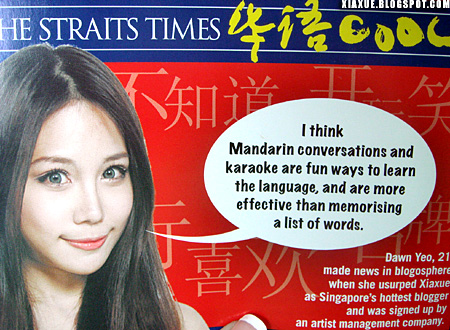 After filming with Rozz today, we (inclusive of half the crew) ate at Anchorpoint. Rozz went to get some money out of the atm, and came back, throwing a postcard at my chest.

I was totally nonplussed till I saw my name there.

Excuse me, DO NOT BOH DAI BOH CHI LIKE THAT INVOLVE ME CAN OR NOT?!

The only similarity Dawn and I have is that we both got noticed through our blogs, and whatever happens after that to her is her business and none of mine can?!

The more I thought of it the more pissed I got.

I mean, what the fuck do they mean by HOTTEST BLOGGER? 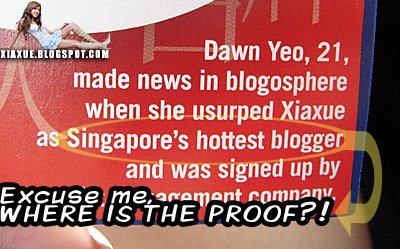 Where did they get that stupid piece of information from, besides from that old Kubye (mix of cb and kkb) Jean Marie Tan's newpaper article?!

And what do they mean by Dawn USURPED ME?! Machiam the "hottest blogger" position is some throne people actually care about.

If yes, how come I didn't know about it?

And if no, then how can she usurp me?

Once and for all, stop calling Dawn the hottest blogger, because... 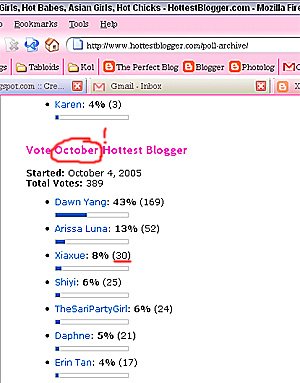 There you go, the stupid, worthless website which Jean Marie Tan deduced the information from that Dawn is the "hottest blogger". (God, I roll my eyes everytime I type that ridiculous phrase, and it's hurting my eyeballs)

If you must insist that such a dodgy website with a grand total of 169 votes is enough to determine, among 55 million bloggers mind you, which is the *roll eyes* hottest, then fine....

Dawn was the hottest.

And the keyword is WAS, because she is OCTOBER'S hottest, not the current hottest, is she now?

The hottest is me and nobody can fight that, because I stay in a bloody 3-room Teban Gardens flat with no aircon, and have super long and thick hair extensions and cotton pjs.

And also, people, if you want to believe in rankings, believe only Technorati, and not some stupid site likely set up by some bored Sammy boy.

Thank you very much, I am very proud of myself too.

Fine, I'd give her the benefit of doubt:

Kwa kwa
Do you sincerely believe that my readers won't let me win a MERE 169 votes? It's just that I cannot be bothered to link such dumb sites obviously set up for the benefit of advertisements.

It seems apparent to me that this Hua Yu Cool! people tried to write a description of what Dawn was actually famous for, decided it is rude/inappropriate, and thus wrote whatever stupid untrue thing they wrote. 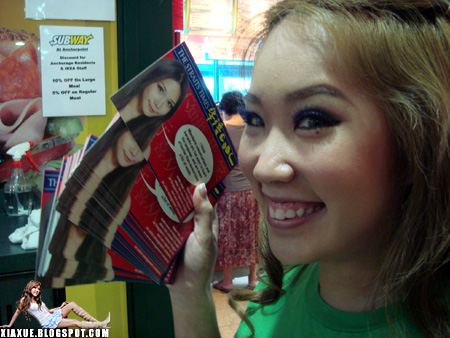 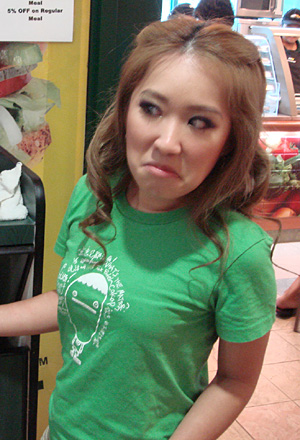 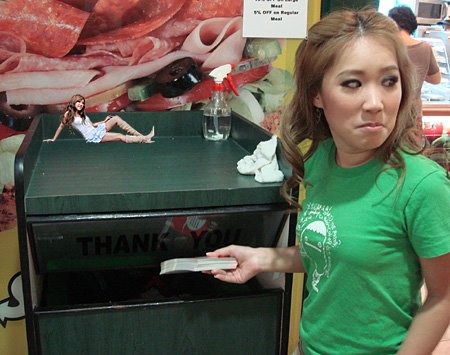 I am sorry Dawn. I really like you as a person, but I will not allow such libel of me to be lying around. In fact, I might just consider some litigious actions, hmmm...

Nothing against you Dawn, I think you possibly didn't provide that stupid description of yourself and never asked to be called the hottest blogger.

But hey, I have my own TV show! 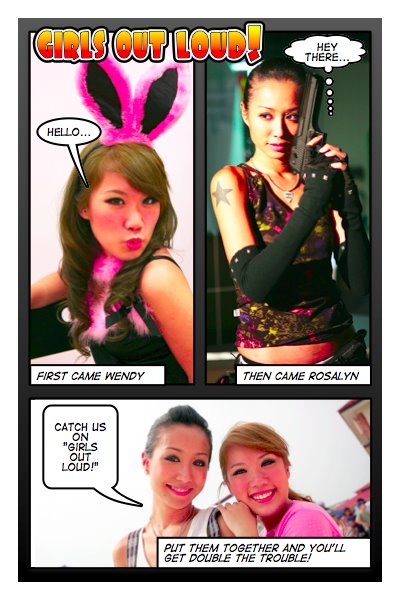 It's called Girls Out Loud

Very exciting isn't it? I've been silently working on this project since like 1 year ago, and was warned and warned not to tell anyone about it. Until now!

In between there were many issues - concept needs approval, was changed, then the director appendix rupture on flight to Japan, almost died etc - thats why it took so long.

I'd tell you guys more details when I get photos from my producer!

p/s: Dawn was considered for role of co-host but Rozz got it. 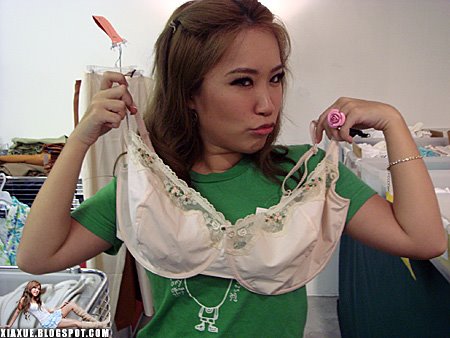 Me with my bra.
p/p/p/s: I am gonna use the tv show thing very heavily from now on, replacing the PSLE being 269 fact. For example:

"You are very ugly!"

"I do have my own tv show though!"

"Hey Wendy, are you hungry?"

"Who cares about a stupid Singapore TV show?!"

"Yeah! You heard about my tv show? I have my own tv show!"

You get the drift.

p/p/p/p/s: Will also put up Halloween pictures soon. they involve Macdonald's happy meal, a clam, and a char siew bao. I love eating those.

p/p/p/p/p/s: I have to stop this post scipt addiction. And also, don't insult Dawn on the comments, it's not her fault people are fucking stupid. You can congratulate me on my new tv show though. Which is fabulous.

Update: Yes it's 83rd, it doesn't make you very clever to point out a stupid mistake, so shut the fuck up already. You won't believe it, but I was 84h, and when I typed 84th my photoshop crashed, and I had to re-printscreen. Within that 2 seconds, I jumped to 83rd. And thus I still wrote "th". True story.

Also. My director really ruptured her appendix. She said it's pain beyond her imagination.

Also also. I am reallllllllly jealous of Dawn, which is why I wrote all this. It is, of course, totally not based on facts and research. Comments that use the boring attack of me being jealous will be deleted. Say something new, please! *yawn*