Recently keep having bouts of bad luck - like not ultra bad luck but the funny sort you kinda see in slapstick comedy you know...

NJ bad luck (nose job)
Momo drove me to my check-up with Dr Huang and at Ulu Pandan Road some fucking tree toppled right before us, so the entire road came to a standstill.

Dr Huang (hereafter referred to as Dr H despite me wanting to hao lian my nose is a whooping $12,000 [!!!] and done by arguably the best rhinoplasty surgeon in Singapore - Dr Martin Huang that is) had surgery to do after meeting two more patients, so if I don't hurry I thought I can't take off my bandages that day, and I really wanted to!

So I got out of Momo's car and hurdled over the damp railing to the other side of the road, where the cars were going smoothly in the opposite direction, unhindered by inconsiderate trees.

It was lightly drizzling, so I walked towards the bus stop, and waited there for a cab.

Promptly, one guy came down from the overhead bridge (must be also another person stuck in the jam), stood like 2 metres away from my bus stop, and stole my cab.

Wonderful. It's ok though, perhaps he didn't see me.

I sat down at the bus stop to call a cab, and thought to myself, "Well, if I see a cab I will stand up and flag it."

Then this fucking angmoh lady came down from the same overhead bridge, and hailed for cabs.

I went up to her and politely told her (all while looking suitably woebegone in my nose bandages and the bottom of my nose stitched up) that I was waiting for a cab too, and I came first.

She sneered down at me (angmoh tall what...) and said,

"Yeah? You were sitting down at the bus stop, you weren't waiting for a cab."

And with that she turned her back to me and continued hailing vigorously at the non-existant cab flow.

I frowned at her and said, "Well, I was trying to avoid the rain, and besides, that doesn't matter. I am telling you now that I was waiting for a taxi, ok?"

Cheebye angmoh bitch continued ignoring me and soon she was joined by two of her friends, one redhead and one blonde.

At this point I was a bit distracted coz I was on the phone with the cab operator, but she just continued hailing and hailing - just RIGHT IN FRONT OF ME!!

While I was listening silently to the phone she took the chance to insult me to her (American I think) friends, saying, "Only in Singapore can this happen..." and yadda yadda continued to insult Singaporeans while gesturing rudely at me.

WTF??? I DON'T THINK IN ANY COUNTRY PEOPLE WOULD ALLOW YOU TO STEAL THEIR CABS FROM LIKE 2 METRES AWAY FROM THEM LOR!

What a MEGA BITCH!

And besides, I was totally polite to her (I thought she had two largish friends anyway and if they want to be rude and steal my cab with brute force then there is nothing I can do. Besides, the bandaged nose IS a rather obvious target she can hit if she gets pissed off).

I said to her, "Hey look, please be reasonable, ok? I don't mean to sound rude, but I 've really got to rush to a surgery and I was waiting here before you."

YOU KNOW WHAT SHE SAID?

"YEAH? SO AM I (going for surgery)!" and continued to hail.

WHAT THE FUCK?????! MY NOSE IS ALL STITCHED UP OBVIOUSLY CAN'T BE LYING ABOUT THE SURGERY RIGHT?? I mean, I was supposed to take out stitches lar, but I could very well be really injured!

She, on the other hand, was totally dressed up for a frivolous day of shopping at Orchard with her stupid multi-coloured-hair friends!

Got make-up and totally accessorized, surgery my ass!

I kept on yakking relentlessly until the bleached blonde couldn't take it anymore (some 50 year old bitch) and she yelled at me, shouting (and I am just a small girl with a broken nose muttering incoherently),

"LOOK, WE DON'T CARE IF YOU TAKE THE NEXT CAB, THERE ARE NONE ANYWAY."

... with really awful bulging eyes at me when she spat the last 4 words.

Which was particularly contrary to the fact that her brunette and "obviously-needs-surgery" friend over there was STILL frailing her arms at the road, all while standing right in front of me.

My bandages started to get wet, which Dr H warned me exactly not to do.

The laopok blonde (brunette very bend on getting a cab) yelled again (which I thought was pretty unnecessary of her, she really needs anger management classes), "Look, let's take 7 to Clementi, ok?" and yanked her frailing friend away to the bus stop beside me.

The moment they traded positions with me, I got a cab.

That would show them filthy angmoh bitches! Hope some tree branches topple on to them, followed by a monkey! They really deserve it! Well, perhaps not the redhead, she kept quiet throughout.

I think the Caucasian girls in Singapore have this thing against asian girls; not all of them of course, but some are bound to have a chip on their shoulder, because white boys like (to fuck?) asian girls.

(I am not talking about my situation, which is true love regardless of race, mind you. Very sacred thing.)

Well that 50 year old blonde looks like she could have caught her white husband fucking the filipino maid, is left with a rude bitch of a brunette for her daughter, and to add salt to her wounds a tree HAD to topple just when she wanted to go shopping! GAH! Her life sucks! No wonder she is so grouchy.


GO BACK TO AMERICA IF SINGAPORE'S CABBERS SUCK, BITCHES!

I am just saying America coz I think their accent sounds like that, but keep in mind they might very well be pretending to be mean Americans in a campaign to smear US overseas relations.


Turned out, with extra-upsized bad luck, that momo's lane cleared while I was fighting tooth and nail for my cab, and she ended up at Dr H's earlier than me.

MJ bad luck
I played mahjong with Wong and her sisters that day.

She is the sort of person whom mahjong connoisseurs will turn their nose up at, as she really doesn't take the game seriously lor.

MJ is a beautiful game of brains and luck, and it takes cunning and social flairs to be able to not win and not piss opponents off, or lose and minimise losses.

Wong, on the other hand, relishes her 1 tai pi hu wins, and thinks that, for example, childish antics like toppling your opponents tiles after he has finished building them is more fun than... say... winning a da san yuan.

Can you imagine hor, that I can lose mahjong to such a person?????!

There was this one round where she got all the four animals, then she zi mo. -_- And she happily announced that after playing mj (although not very often) for like 5 years or something, this is her first 5 tai zi mo.

I was the major loser! Wong family cheat me. Family of cheats! Lawyers cannot be trusted.

Miscellaneous bad luck
Was very careful not to hit my nose while out with Huifen watching Curse of the Golden Flower, but I was swollowing medicine with my iced earl grey (with vanilla ice-cream, yum!) and tried to gulp from the glass without using the straw.

Conveniently forgot there was a spoon inside, so when the cup was raised the spoon slid along the round rim of the glass, and hit me right on my wound. 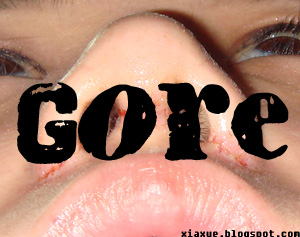 Hover mouse over to see. Warning: Gross
It hit me at the side of the middle wound. Bam! No lasting harm though.

This photo is taken fresh after stitches was out, so obviously it is still very bloody, and also, the nose is completely swollen which explains why the nostrils are not equal in size.

So now you know where to go out for scars lar if you suspect someone has done his or her nose!! :D But actually if it is well-taken care of, there is almost no scarring.

And amazingly enough, for a body part so sensitive, the pain is almost like non-existant!

On a scale of 1-10, 1 being maybe an ant's bite and 10 being a shark's bite then being hit by a lightning bolt then burnt alive, I'd say that I suffered like 2.5 at MOST.

Shiok. Nose will still be swollen for another 1 month or so till the swell is like 80% gone, but it already looks pretty nice!

Though as I said I cannot post "after" pictures lar, you guys just have to catch it on Girls Out Loud. :D

p/s: Yes I saw the Jean Marie Tan article! Makes me wonder why that any respectable newspaper would allow their journalist to lash out article after article of personal vindictive attacks? So childish leh, the feud between me and her is so long ago, still down there typing mutinously to herself.

Tsk! Some people just really have no life lor, must be.

Would have been a wiser, smarter move to praise the show grudgingly or something, then it would seem to everyone she is the bigger person.

But she attack that I have a short tongue leh! I already admit that it's a flaw I am born with what, not like I can do anything about it. -_- 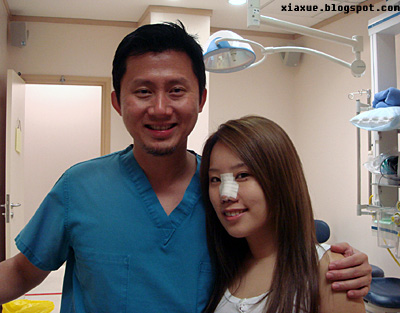 Me with Dr H, and an expensive (albeit swollen) nose...
and an apparently better life than some people.

p/p/p/s: Curse of the gim huay is good!!!!! Gong Li and Chow's acting skills are superb, and the cinematography was like WHOOP!

Only thing I didn't really like was Jay Chou. I really love him and all his songs, but his acting is so raw compared to the rest lar... He kept getting shifty-eyed, and in the middle of the show I was suddenly AWARE THEY WERE ALL ACTING.

It's a very unpleasant feeling to be jolted out of the drama like that. For half of the show I really thought Gong Li was a tormented queen. Damn!

Would you get very upset with shagging your half brother if you have not grown up together with him? Like say you only got to know him when you both are adults?

I think I won't be leh... I mean I will be quite disgusted, but I won't be TRUAMATIZED AND SCARRED FOR LIFE lar. I'd be like, "Ok, that was a mistake. Let's not do that again, shall we?"

It's the idea of shagging someone you grew up with that's fucking gross. EWWWWWWW eww ewww ewww eewww

last P/S: Middlesex, a book by Jeffrey Eugenides, is about incest too. It is so amazingly written that not only is it not gross, you will even grow to love the brother-sister couple. Good read.

I having this thing where I tend to go from topic to topic in a mad endless hop.
- December 21, 2006
Newer Post Older Post Home