I know, Girls Out Loud rules!!

Many people were like asking me if I was really pissed at Mia, or just faking it for the camera.

I wish I were faking it ah! Means I am a wonderful actress. But unfortunately I don't think I am up to that level yet.

But you tell me lar, if some ugly "model" keep preaching to you how to live your life and write your blog, you not sian meh? Obviously pissed right? You guy can't see, but I was actually trembling in anger (and also a bit scared and awkward - it's a horrifying mix of feelings).

Mia actually said more ridiculous things, like how for example, her love for bangalas stemmed from the fact that once upon a time... She was in Little India MRT, and an old man fell down and got trapped by the closing train door or something...

And according to her, "a dozen black hands" stuck out and helped the old man.

She therefore thinks that all bangalas are very kindly, sweet creatures.

And also, as a "pageant winner", the grand responsibility of defending bangalas lies on her, because - obviously, don't you see? - people who help an old man get untrapped can never be lecherous lawless molesters.

*looks very confused, implant shakes in disbelief* (I'm gonna blog from now on about how my implant reacts to situations. It is as if it has a life of it's own!!! Help me think of a name for it muahahaha.)

Dunno lar! It was really super awkward, Gillian had us doing the staring scene AGAIN and AGAIN, and can you imagine I have to keep looking into Mia's eyes for like 20 times till G is happy!!!!!!!!!

GILLIAN HATES ME!!! She thinks that making me face people I don't like makes good tv!!! (Mia, Steven Lim, Izzy - they all make my implant shrivel)

Next season maybe we will have Jean Marie Tan and the blogtv old chick. The people who dislike me and vice versa are aplenty! Rozz says she has none. -_- Where got people get along with everybody one??!

Been thinking of getting a tattoo for a long time now... 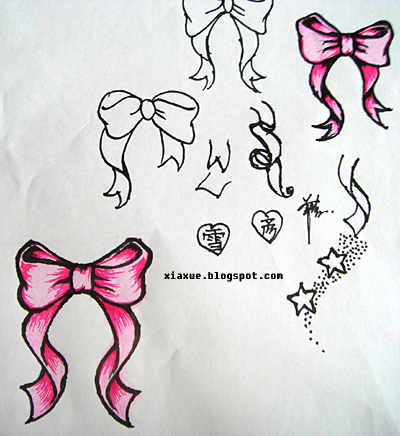 Wanna get the bottom pink ribbon on my left arm, but I spoke to Momo about it today, and she said she will chase me out of the house if I ink myself.

I'm getting it anyhow, it's just a matter of time.

I don't care if you guys don't like my pink ribbon! It symbolises that from this moment on in life, I am clear what I want to do - I want to be FRIVOLOUS.

For the past 22 years, I've always been torn between two things - vanity and intellect.

I could focus on the fun part of life - being pretty, being vapid; or I could be dull but, well, smarter.

It seems at first thought that the two need not be exclusive, but they ARE. Well, at least to me they are.

I don't really know how to explain this (possibly coz vanity won the battle since years ago and rotted my brains)...

I was telling Wong the other day when we were driving back from supper.

Supposing this life, I am still me inside, but my physical appearance is so far from below average that I could do nothing to salvage it.

My only other source of enjoyment will be to focus on my studying (so ugly, might as well study hard, earn money), which, at the younger part of my life, I excelled in, and brought me attention and distinction from other people.

I am that sort of person who lives for attention. Nothing makes me more happy than people paying attention to me, and praising me for the good jobs I do.

If being 1st in class brought me admiring glances, then study I will.

But unfortunately for me, nothing brings more instant gratification than looking good.

If I didn't care that much about my looks and the other superficial stuff in life, or rather, chose not to care, I'm sure I could have spend a lot more of my time on reading, maybe writing a novel, or I dunno what else I would have done. Trying to earn a lot of money maybe?

When I started this blog it was just light-hearted writing, but people started saying how they think I am stupid.

Up till today, I am the pioneer of full-time blogging in Singapore, yet people are still saying that! Let's see them try to earn a living doing this. =D

I got very uncomfortable being labelled STUPID, and felt I had to prove them all wrong by raking out PSLE or O Level results, and the ultimate is of course to attempt to join Mensa.

There will always be an endless flow of people saying I am stupid, just because of my appearance.

Yes, people in that 98%, calling me dumb. It used to infuriate me so bad.

I love blonde hair, love fake eyelashes, and I love my big curls. I love writing in Singlish, love scolding vulgarites, and I love making bimbo jokes... and if all these things I love are mutually exclusive with how an intelligent person is perceived to be, then SO BE IT.

But now, especially with the show stamping a new benchmark in my life, I DECIDED AM DONE WITH PROVING MYSELF TO THE PUBLIC.

If people are gonna say I am a bimbo, I will just smile, knowing that it is them who are too simple-minded to see through a PERSONA.

Yes, that's what it is, a persona.

You think Ali G is real? Or Borat? Is Oprah really concerned? Howard Stern really so straightforward? Or is Paris Hilton really so stupid? The fact is you will never know, so don't judge.

Just because some people have different priorities in life, it doesn't mean that if the situation arises they cannot solve a logarithm equation.

I decided on my priorities (ie focusing on superficiality) when I decided to go into Polytechnic, so from today onwards I will not waver anymore and just appear to be as air-headed as everyone chooses to perceive me to be.

Definition
intelligence (ABILITY)
noun [U]
the ability to learn, understand and make judgments or have opinions that are based on reason

...
Doesn't say anything about having a degree or not having heavy make up on.

Two super long blog entries in a row! I'm getting my blogging bug back.