Eh, any similiarities are purely coincidental, and below scenario is just a figment of the author's imagination.

Wee Tuck was walking along his colleagues desks, interestingly lined with colourful posters of the various celebrities they like and the more expensive of the junk given out during press conferences.

He was slobbering over a doughnut bought from the level 5 food court, slightly aware of the calories adding to his increasingly pudgy body, but what the fuck, not like anyone thinks of him as an sex object or something.

He snorted into the doughnut at that thought. Yeoh Wee Tuck the sex god! Ha!

He heard a slight buzz from Jeanmaria Tan's (or Jaria as they called her for short... what's with the two first names anyway?!) desk and looked into her cubicle.

Something looks suspicious. Jaria was focusing intently on her computer screen, which had a picture of a man.

Her hands were not on the mouse nor keyboard, but tucked under the messy desk.

The ugly woman screamed "FUCK!" and something clanked to the floor. Something bulky and silver and black and... vibrating?

The iPamper, oblivious to the questioning stare of Wee Tuck, continued to buzz happily on the carpet, turning itself a full circle before Wee Tuck looked up incredulously at Jaria.

Comprehension dawned on his face, and the woman looked suitably embarrassed, all while mumbling something about it being late and she thought nobody was around...

He suddenly remembered himself having a backache after a football report last Monday, and he had rubbed his back all over with that borrowed iPamper and EWWWWWWWWW... FUCK! He retched into the bin, his wet doughnut bits soaking up the waste papers.

To Wee Tuck's horror, while he was trying to get the bile spit out, Jaria started wailing like she just got widowed.

Wee Tuck frowned. What has that got to do with anything?? "Yes, so what?" he asked tensely, adding "you stupid fuck" in his head.

"I can keep a secret," whispered Wee Tuck in what he hoped was a sympathetic voice. He really couldn't care less about Jaria's sordid affairs but a secret's always welcome.

"Well my husband... He only wants to have sex like once every 2 months or something! And when he does, he screws me sideways in the dark - 3 mins, max - and leaves the wet patch on my side of the bed! MY SIDE! The fucking bastard!" Jaria was lolling in terror at the memory.

Wee tuck look at Jaria and thought, Well, who could blame him? and formed various vicious standpoints in his mind about how women should always keep up with good physique like gay boys always do.

Instead he said, "Oh, I'm sorry, I guess that would explain the iPamper... I won't tell anyone." He already decided he would warn people not to touch the cursed device. Ew ew ew.

"Was on discount," Jaria whimpered.

There was an awkward silence and Wee Tuck leaned forward towards the computer screen (thank god girls don't leave residue) to check out Jaria's arousal object.

She realised what he was doing, and hastily turned off the power, but alas! a gasp of recognition was already issued from Wee Tuck's mouth.

Jaria groaned. Today was seriously not her day.

Jaria explained incoherently about how she just happened to surf by and attempted to change the topic by asking what Wee Tuck wrote about today. She also turned off the iPamper, which was proving to be an annoyance buzzing endlessly when not applied on one's genitals.

"Best dressed celebrities of 2006," Wee Tuck lamented in a drone.

The gay stylish instints inside him radiated with anger thinking about Singapore's celebrities and their boring dress sense. UNFORGIVEABLE! They are sooo boring! Look at the hollywood stars! He rolls his eyes.

"Think you could include a worst dressed category?" she inquired.

Wee Tuck squirmed, thinking he already knows what the bitch was up to. "Erm, I already wrote the article."

"Ya... So you wanna put Xiaxue into worst dressed?" Let it go, woman, why hold a grudge for so long?? Wee Tuck couldn't understand.

"Naturally, duh! Hate her! Let me see, gotta go get her stock photos and choose a picture." Jaria never stopped smiling rather crazily while talking, and actually rubbed her hands in glee.

"But she is not generally badly-dressed... Not like she goes to star awards or something... She's mostly just in tank tops yeah?"

"AHA! How about this one?" Jaria found a photo in their database.

Wee Tuck stared at her.

"What do you think?" she asked in a crazed whisper. The glint in her beady eyes was freaky.

"Well, firstly, it won't qualify Xiaxue as a 2006 worst dresser because that photo was taken almost half a year before 2006 even started... And secondly, what you gonna say about her attire?"

Wee Tuck frowned. 2005 was the year of the bohemian, and everyone wore stuff like that. Bailing is shanky. A midriff top and a long skirt? Nay. A tad fat maybe, but not shanky.

Besides, if he didn't remember wrongly, it was their paper who ask XX in for an interview, and told her to dress as sexily as possible. Seems a tad unreasonable to attack her for what they told her to wear...

"So? Use this?" Jaria stared at him rather fiercely.

"Can't you try to find something else?" Wee Tuck sighed. "Something that is more reasonable to attack her with?"

Jaria picked up the iPamper and smacked Wee Tuck on the head with it. Ew!

"I DON'T FUCKING HAVE TO BE RESPONSIBLE, OK? I AM A FUCKING JOURNALIST AND I WRITE ANYTHING I WANT!!!"

"Fine, ok ok, I'd put Fiona next to her or something, just promise NOT to touch me with that thing again!"

They can say all they want!

The internet was fully functional (and way more flexible) for her retorts, and most importantly, unlike all celebrities, reporters had absolutely nothing to gain from the extra fame.

Woah, article of me today! 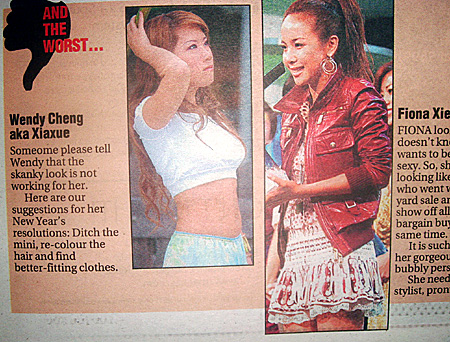 This has ABSOLUTELY NOTHING TO DO with what I wrote above. That's a totally fictional story, of course. :)
- December 30, 2006
Newer Post Older Post Home