I don't really know anyone who sincerely enjoys it (maybe bangalas, but of course, I don't "know" them), because it is so bloody festive that you are EXPECTED to have fun, EXPECTED to not be lonely.

Everyone else is also busy pretending to have fun, so if you don't, you seem like a bloody loser.

And what happens when you have expectations and do not meet them? Disappointment and frustration.

Organising stuff to do on Xmas eve is always a bloody pain in the ass. You can go to organised events (ie parties on bloody orchard road - I hope you guys have the sense not to go, unless of course you are a bangala, then you can meet a lot of people from your country have foam the girls), but organised events are always sooooo crowded.

Before you can start to enjoy yourself, you have to defend yourself against the crowds. Theft, molest, people stepping on your toes, etc. How fun!

You can organise "fun" stuff yourself.

But firstly, WHAT fun stuff? And secondly, organising is a pain, and besides, everything is so expensive.

And the most troubling of all - who should you go out with?

I wonder if in real life people have friends like in Friends (I'm talking about Monica Ross Phoebe Friends), a stable group of people you can hang out with every year on lonesome holidays (I can act emo by saying "the more crowded it is the more alone I feel" but lucky for you I am not that sort of disgusting blogger) and be sure not to go into a frenzy trying to get something to do.

But IMHO, it is near impossible to have a stable group of friends, because realistically speaking Monica-and-Chandler rarely happens, and people in the group (especially the girls) will tend to have their other halves to spend Xmas with, and will abandon their group.

Or be spending Xmas overseas, also effectively abandoning the group...

Group of four dwindles to two, then do you still meet the "group", or seek other plans?

Maybe meet another group that you are not so familiar with? But you don't wanna spend Xmas with people you don't really know leh...

People say you can always fall back on family, but Momo is out partying with her boyfriend and his friends (what did I say about girls?), Clinton is staying at his friend's place, and I am alone at home!

Well with stupid Cloudy who shitted in the hallway yesterday. GAH!

Anyway this year I've got Kelvin, who is the sort of person who will BRING the girlfriend into the group (because he is key person of the group and if he is missing likely everyone won't meet at all; and also, said girlfriend will be abandon HER group, thus making HER group not be able to meet up), so I am invited to the party at his house with the rest of the gang lar.

In that sense I feel that male friends seem to be more reliable.

Obviously there are also the sort of guy who will go missing when their girlfriend is around, but my guy friends are constantly bringing different girls into the group, making me feel...

That girls are somehow just... part of their men.

I don't know why I had this startling feeling that day, but I was out with some of my girlfriends, and all of them were attached.

We talked about our boyfriends, and it suddenly hit me that we are not WHOLE, we are merely the other half of our men. A sidekick if you must.

I realised that one fine day, all of us will get married, have a family, and that family will consume all that is important to us. Friends will rank way below husband and kids.

I'm not really explaining this feeling I have very well, but it felt a bit like the boyfriends LET their girlfriends out for a gathering among ourselves, and there we are, chattering, insignificant, unwhole.

It was just a very fleeting feeling, and I told Shuyin about what I felt, and she just frowned and said she disagreed with me and never felt that way.

Like, everyone has this female friend who has always been attached, and seems that her whole life will topple if she didn't have someone to lean on even for a bit. She can't survive as a lead character on her own.

I suppose there are guys like that too, but it is quite a bit more uncommon than females.

Anyway, went off on a tangent. As I was saying, the last reliable alternative is going to church. But going to church just for xmas seems really stupid (and not to mention blasphemous)!

In conclusion, Xmas sucks. So does New Year, V-day, etc.

Mindless clubbing pictures:
Nose's all blurred out coz you guys are supposed to get the first glimpse of it on the last episode of Girls Out Loud! 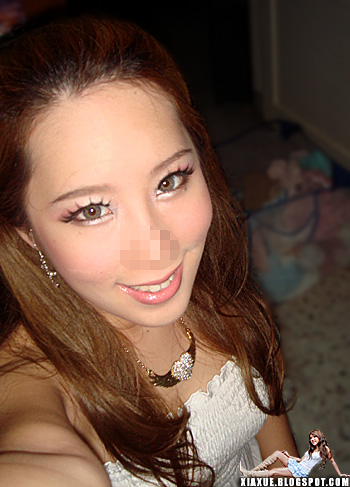 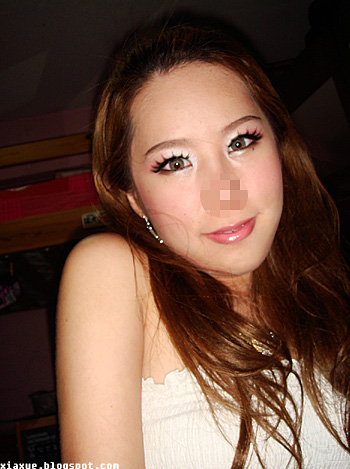 Before meeting Junne and the boys...

Can see the bridge and my lovely implant.
*implant blushes in pleasure* 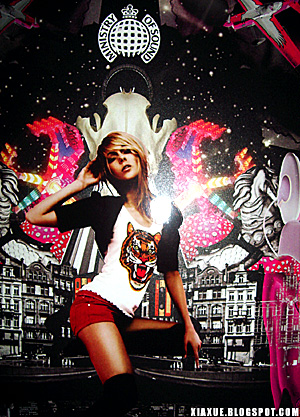 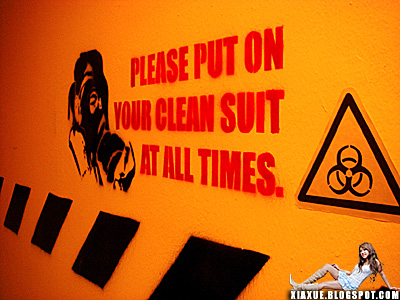 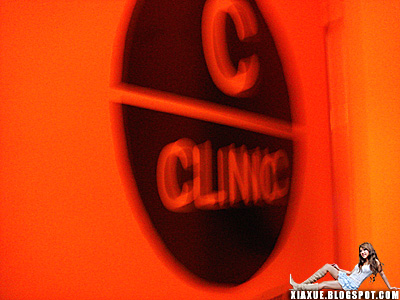 We go into Smoove's members' area, which is designed to look like a basketball court: 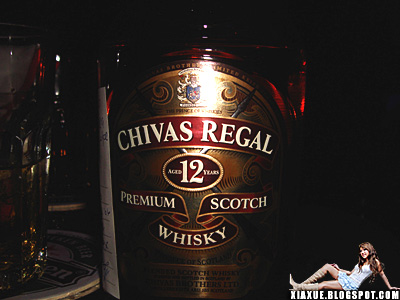 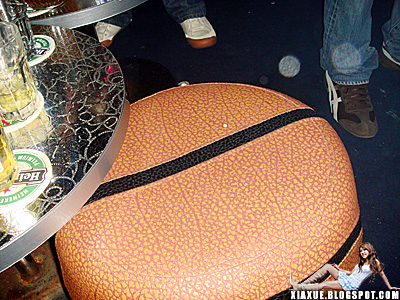 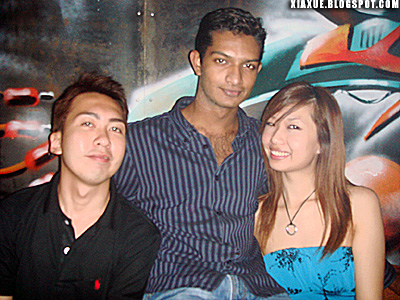 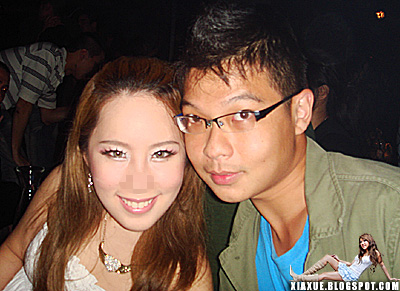 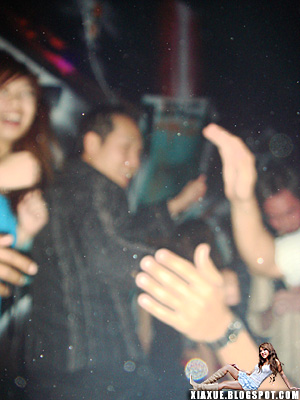 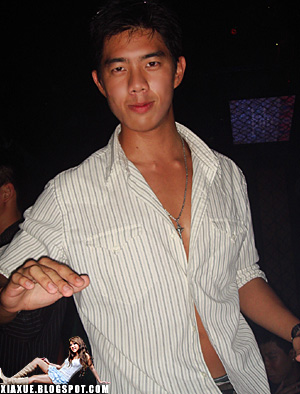 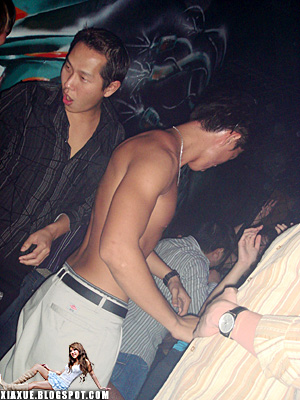 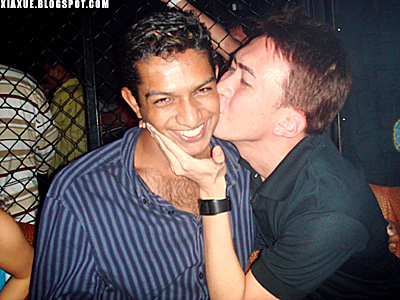 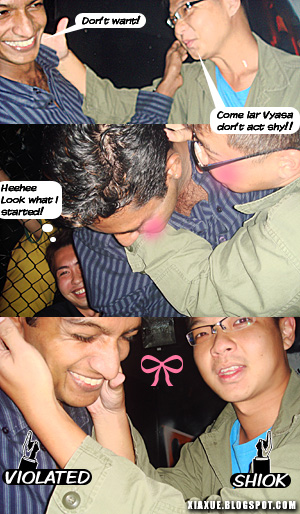 Tim also wants a piece of the action! 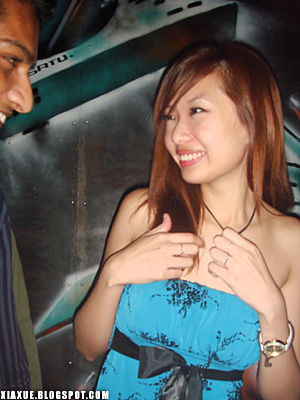 Ann looks at Vyasa in a new light.
My implant stares. 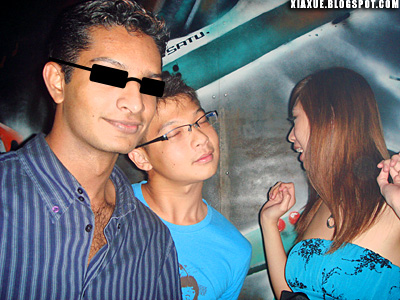 Vyasa looked wonky-eyed in this, so I added some photoshop sunglasses for him.
But look at Tim! Look so funny can. 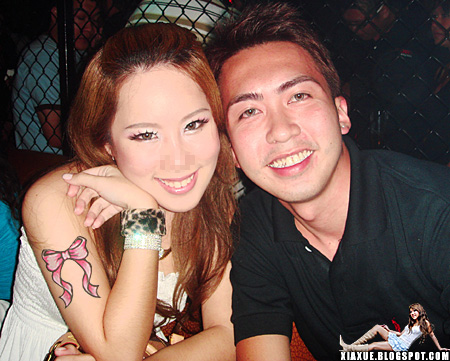 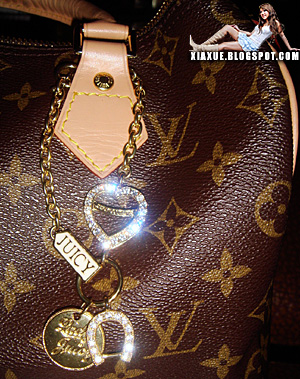 A juicy bracelet I bought from the states... :D 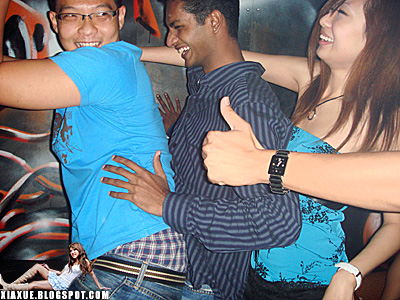 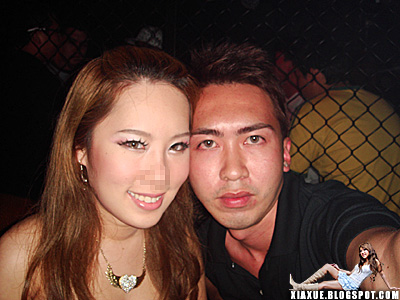 p/s: Vyasa just called to say the boys are gonna play dota for a bit. Did I just say they are reliable???!

Me, "You guys are not going to do the countdown thing in the lan shop right?"

Vyasa, "Ha! We are not going to do the countdown thing at all!"

Well, Merry fucking Xmas to you! Hate it. So commercialised. (WOoo I just realised I typed "Merry Xmas" at the exact stroke of midnight!!)

Want my baby here but he is sooooooooooo far away.