Diary of the nose

I wrote this just for keeps, so it's not interestingly written, but if you guys are interested to know how the surgery went... :)

Was pretty nervous about my surgery, but I really loved the crew of Girls Out Loud, so I felt quite happy that they were all there with me...

The guys were pretending to be macho and didn't show a scared side, but my director Gillian, producer Joan, our assistant producer Ashley, stylish Elisa, and of course Rozz was there too, and they kept shooting me scared looks and told me it will be cool and I shouldn't worry.

Before the surgery started it was all hectic coz I had to do an interview with 8 days, eat a bit of lunch (supposed to be a 4.5 hour surgery!), swallow a gazillion pills, as well as change into my surgical gown and remove all my make up!!!!

Momo came too, with my Auntie Susan, and she was quite emotional and all, hugging me and crying... -_-

At this point I started feeling a little jittery, coz although I would say I am ok with pain, I still didn't like it yeah!

But Dr Huang appeared super confident and is also super shuai! Hehehe... He said there won't be any pain.

So yup, finally got on the table, which was lowered such that my head is tilted back a little. I had sleeping pills but was frankly too excited to feel sleepy at all.

Dr Huang started injecting numbing shots, which hurt a little - at the sides of my nose, and into the tip of my upper inner lip. Surprisingly enough, it wasn't very painful, hmm..

So yeah, after I got numbed he injected local anesthesia, and it was injected all over the place! Like 30 shots or something!

My heart started pounding and I trembled all over; must be due to some funny chemical reaction, but the shots of LA wasn't painful due to the fact I was already numb.

It was SUCH a funny feeling, I could still feel the existance of my nose, but it felt like it was a lump of stone and you can do anything to it and I don't give a shit.

Started with the cutting.

I felt really terrified when he started, because I was afraid that for some reason the LA won't work and I can feel it all!!!!

But well, no feeling at all.

Dr Huang had to cut certain spots such that my nose's tip, according to him, "opened up like a book".

Was really weird feeling coz I can sense that he is tugging at open flesh, but felt no pain.

The proceduce for the insertions took a long while, and I started to feel pretty bored by the time it was done.

However, I stayed awake, and talked incessantly to Dr Huang.

I think he must have been pretty irritated by me!

I swear it felt like I was on drugs or being drunk, I kept mumbling rubbish which I think has no meaning, and I cannot remember them after I am done.

I know that I asked him if Black or Indian people have the same shade of pink meat underneath their skin. It's not a racist question, I was sincerely curious because, you know, black chicken has their meat black also right?

Dr H's answer was that it is the same colour underneath all our skins. Ah! Now I know!

So we kept talking, basically with me asking him what's going on about the surgery, and he was a perfect sport and answered everything.

At this point I really felt I had to pee, so they gave me a bedpan... So paiseh, all the nurses can see and so could Dr H, though I think it was done under the blanket. But oh! SO GOOD can when the urine came all out. WHAT? I drink a lot of water for the pills ok!

It was time for the implant, and also to remove fatty tissue from my tip. 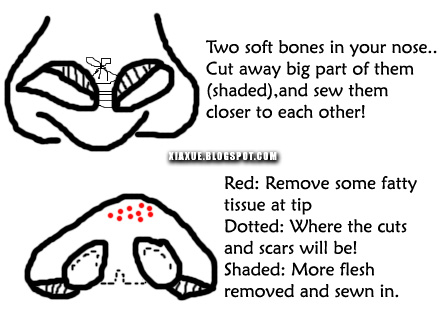 I could feel (when I say feel I mean I am aware he is doing it, but I felt no pain whatsoever) him sawing away at the two white soft bones, and later on, also sawing away at my nose bridge. It turns out he was just preparing for the implant to be inserted.

The implant took a long time to perfect, and he had to keep sculpting and sculpting it till it was what he wanted, and I fell asleep at this point.

When I woke up, he was still doing the bloody implant!

So happy I have such a professional surgeon lah! By this time we have over-shot the predicted time of surgery, which is like 4.5 hours.

In the background I can hear Gillian say stuff like, "Can we change the tape for a bit?" or our sound-guy Brando saying he has to change Dr H's battery. -_-

After that he started on the Alar, also known as "wings" in latin, which is the two fat flaps I have as my nose's sides.

This part felt a bit funny, because I was totally aware that Dr H was CUTTING meat off me, and it would have been so painful if not for the vulnerable bit of anesthesia I had in me. It's kinda scary, because I didn't know if it (LA) would go off suddenly, but as it turns out, anesthesia runs out GRADUALLY, so if you start to feel a bit of pain just tell your surgeon to put more in!

Which is what I did a few times - could feel the knife a wee bit and got freaked out, but Dr H was very pro and immediately injected me with the god-sent anesthesia.

This is obviously not Dr H's fault, because he put enough LA for 6 hours as a safe bet, and by then it was 6 hours already.

After the alar was cut I remember asking Dr H:

"Oooh my flesh cut out?"

Dr H, "It is beside me on a tray. I will throw them away unless you wish to keep it." (That guy has a wicked sense of humour which he protrays with a totally straight face. Of course I cannot see his face, duh -my eyes are covered with some graze - but yeah, can SENSE it)

After all the cutting is the SEWING... The stitching went on for AGES, had like, I don't know, 3 thousand stitches, and at one point I felt a bit of pain and told Dr H about it...

He was like, "Do want want some LA on it?"... I thought about it and decided that the pain was really tolerable, so I told him that and he said "Alright!" and went on happily sewing. :D

So yup, after 7.5 horrible hours the surgery is finally done. I had a first look in the mirror, so when people from Extreme Makeover act like they are all shocked to see it when the bandages come off it is all fake nia!

Nice and narrow and sharp!

Had a groggy time getting off the table, and my mom and cousin Cally was there to support me. :)

Had fish soup which Momo bought from Holland V, and waited up till 12.30am to show my baby my new nose on webcam. He is the only worry I had, coz I am soooo scared he won't like my new nose can!

He seemed ok though, so all is good!

Was given a stringe thing to wash the insides of my nose with salt water.

Yuck! I dug it gently it to some cotton buds, and the bud had like mucus and brownish blood on it. Double yuck!

Otherwise, I'm feeling no discomfort except a dull numbing pain on the nose... It's like when u just pierced your ears, the feeling is quite negligible.

A total of like 9 different pills to eat, one cream to apply on the stitches and the salt-water bath thing. Bah! 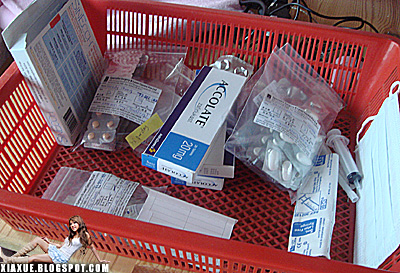 3 thousand pills
Had to sleep with double pillows and try to sleep upright, but Dr H said that it is ok to sleep at the side if I really want to, as long as I don't sleep ON the nose. Who the hell does that?!

I asked if gravity will cause the implant to shift, and he said nonchalantly, "That's ok, because we can always push it back."

I've been a good girl, keep washing the nose with salt water and also applying my cream regularly. There is no blood coming out, so that's a good thing!!

I can't laugh though, I feel like I will burst the stitches! 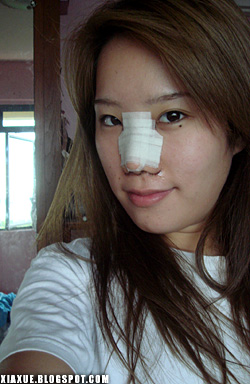 After the surgery my nose was swollen, and that apparently makes me have better blood circulation and my cheeks were super rosy and my lips full! Shiok. 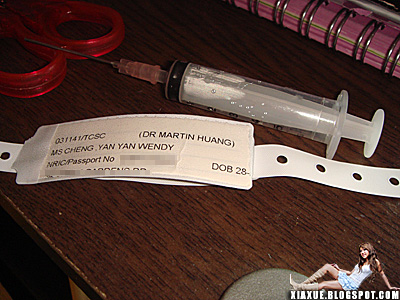 I woke up at 1am, feeling a bit panicky, coz I feel that my nose, which I obviously can't wash with the bandages, will get soooooo oily the bandages (which are more like tape as u can see), will fall off! GAH!

I wonder if Dr H will retape me? I hope so, then I can get a glimpse of the nose!

Ben said he will go with me. Stupid Mike is at his friend's place and I haven't spoke to him for like 2 thousand years. I think he doesn't want me anymore. =(

Getting sick of fishy food. Momo was very nice and cooked cod fish for me, very yummy! Yes, I know I am contradicting myself but whatever. 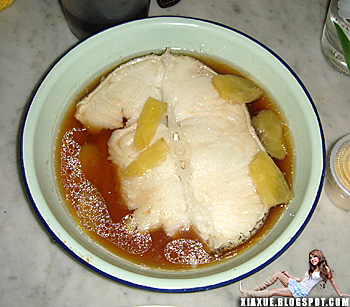 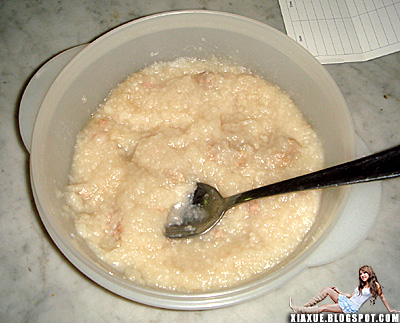 I love my momo because she took such good care of me when I was home-ridden.

Woohoo getting stitches off soonish!!! Tired of staying at home and tired of oily tapes... 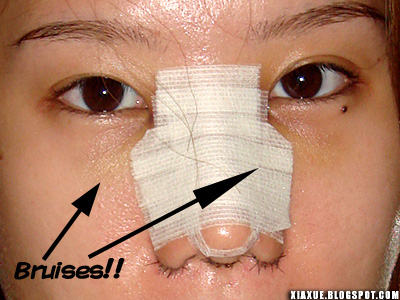 Developed some bruising
Yes I know it looks like nose hair.

Met unreasonable angmoh who snatched my cab on the way to take off stitches. Bitch.

Went ktv with Weili, shuyin, alvin, wanyi and zhengchang! The buggers KEEP making me laugh and my freshly healed wounds threatened to burst!!!!!!!!!!!!!!

Had horrible nightmare of implant shifting to the side. It was so bloody realistic! The implant shifted like 1 cm to the right, leaving a dent in the middle.

I touched it, and it felt all mushy and squishy! EWWWWWWWWW!

Woke up with a horrific fright and nervously touched the nose.

Also, I was feeling very warm that day. I touched my nose, and it is surprisingly cool! Muahaha... Isn't that just funny. 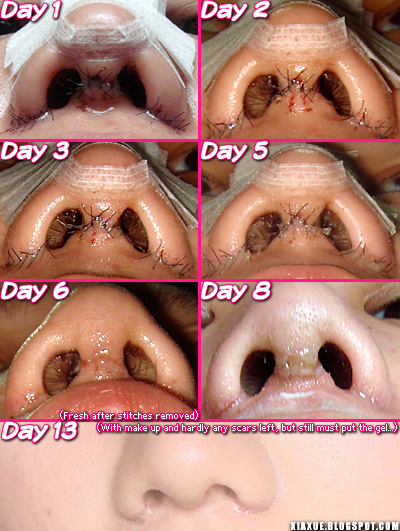 Have to constantly put yellow ointment on it, so the wounds won't dry it and split or something...

Yeah yeah, you think you don't have nose hair meh?

2 on average throughout the whole surgery, even inclusive of the injections.

I know the damn thing looks like it is so raw and painful, but it's actually totally remarkably not!

I'd say I'd have tolerated the pain and not cried even if I did this when I was, like, 8 or something. That's not to say young people should do plastic - it's a permanent life alteration, so think about it carefully!

It irritates me when people keep saying "pain" is part of their decision to not get a tattoo, plastic surgery, etc. You people are SOOOOO weird!!

Tattoos and plastic surgery are irreversible life-altering things, and you care about like 2 hours of pain? SURELY there are many other things to think about besides a wee bit of hurt, especially when it is so temporary!

Pain is very low among the list of other things I would be considering; design being top.