People have been emailing me asking about getting nose jobs, and it's suddenly like I am the expert in plastic surgery!

I know I am kinda warped, but I feel proud to have had done it, akin to, say, joining the mile high club (ie having sex on the plane) or something.

If you are 22 like me, do you know anyone who have done plastic surgery before? Besides frivolous aquaintances, I don't know ANYONE who has done it!

I don't think it's BRAVERY or COURAGE, like so many of you have said... I DIGRESS!

Why do you guys keep saying I am brave? That's ridiculously weird; I don't think I'm brave at all, and a word like that is used to describe people who die for their friends in the warfield, or go on a death mission up a space shuttle to blast a meteorite approaching Earth, etc... not for someone who did a fucking nose job.

That sort of just degrades that word. Courage. Over-used.

I feel quite... I don't think there's a term for this sort of feeling, somewhat undeserving mixed with embarrassed (let's call it underrassed), as I think doing plastic doesn't need bravery - it just needs you to rank vanity high enough on your list of priorities.

Besides, I had the best surgeon, (literally) didn't work for the money that paid for it, and had almost nothing to worry about, least of all pain because I suffered almost none.

Other than the fact that I have not dug my nose for 3 weeks now, which I find a supreme pleasure. Ah! Nose-digging! You don't miss it till you can't do it. (I clean it with a q-tip you idiots)

Why is it that when you insert something into an orifice that's somewhat tight-fitting it always feels good?

So yeah, you can strike off "brave" from my list of good qualities, but hey, you can add "pretty nose" to it!

I know having a pretty nose is not a good quality per se, but I was drinking water from the tap yesterday, and guess what?

It's so sharp it hit the tap! That never happened before!!!! Shiok. Is surely a good quality to have.

Yeah yeah back to me knowing nobody else who has done plastic surgery. Yeah! I feel quite proud of it! I guess I am just mad this way because I try so hard to be different.

I have this thing going on automatically inside my head that makes me dislike things that are common, especially with regards to looks and style - ie office wear, charles and keith's stupid kitten heels, silver or black phones, silver or black laptops (bloody engineers should never design things), comic sans, brown rebonded hair blah blah the list goes on.

So don't ask me to put less make up or dye my hair dark again, or straighten my hair. That's not my style, and it will never happen. =)

Gillian told me that we were interviewing this atheist guy on an episode of Girls Out Loud, and she said he had written his views on a forum and was the only one leaving his email - plus his arguments were ridiculously lengthy.

I told her, "Wow, I know of someone just like that!" and she said, yeah? who?

I said Gabriel, a fellow editor of tomorrow.sg.

Not completely to my surprise, Gillian said, "That's exactly the one!"

and Gillian replied, "Funny! That's exactly what he said about you."

I replied, "..." like how they write a mumbled indistinct weak retort in story books, because I didn't really realise it till that point, but it's completely true.

I do try hard to be different. Don't we all? Well, I suppose not.

And naturally, Gab and I have some similar points, though his trying-to-be-different method is intellectually, while mine tends to be a lot more superficial.

We both dislike macs and organised religion and despise their fellowers even more. (At least that's what I gathered from his blog, though he might argue on the word "dislike" because he is that sort of person)

He does like long rebonded hair tho, but I suppose that's because the look is unique within the men.

Back to nose jobs. Man, I can't stop talking about it!!

Nowadays, when I go out to town with friends, I keep pointing at people and going, "Fuck, that girl had a nose job, I'm fucking sure," and my friends will be like "where, where?", totally believing me.

Coz it takes one to know one mah! I can recognise a fellow fake nose anywhere!!!

I feel like I am betraying the plastic surgery sisterhood, but because I used to be so curious as to how to tell, now that I can, I shall share the secret with you guys!!

Anyway, this only applies to Asian people (maybe Africans too?) because most of the time angmohs either remove a bump on their bridge, or make their nostrils smaller, which doesn't require them to put an implant.

Even if they do put an implant, it is not that easy to tell because a high bridge suits caucasian faces better.

For the unfortunate races with either flat or flashy noses, they normally insert an implant and do alar (sides of nose) work.

Here's how to tell, especially if it's bad surgery: 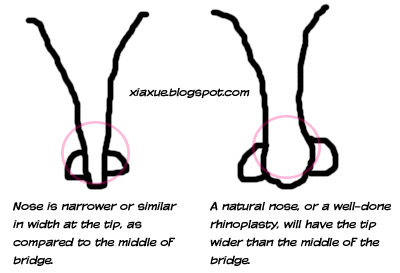 This is for people who have narrowed their tips... Notice how the tip looks smaller than the middle section, or the same size - highly unnatural. 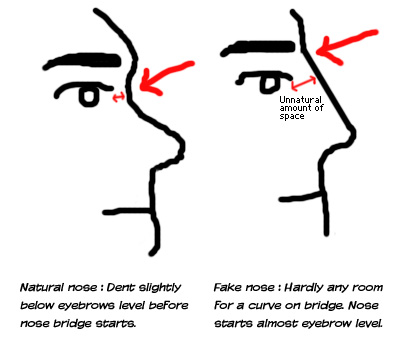 Unfortunately for Asian people with nasal implants, their flat faces, especially when viewed from the side, does not match a highly increased nose bridge very well.

When you can see that the nose clearly starts higher up (ie at brows level) than it normally should, the person has an implant almost for sure. 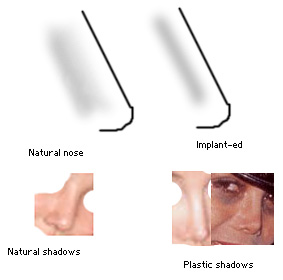 Perhaps the most tell-tale sign of all is the way shadows fall on the nose. Now, an implant, when viewed cross-sectioned, is like a less curved semi-circle.

Therefore, when the implant ends (at the side of the nose), there is a tiny groove before it meets the natural bone of the person.

As such, the skin covering the sides of the nose is not entirely smooth but would have a grooved line along the side edges of the implant.

This causes a very definitive shadow that runs along the length of the nose... It would be bright at the very top where the light hits, then suddenly turn darker, whereas on a natural nose the shadows are gradual (as I shaded for you guys) because the normal nose is rounder. 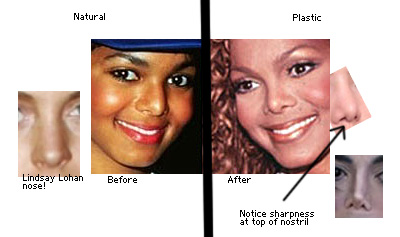 In the case of alar reduction, nostrils are triangular and have a very "pinched" look, whereas a normal nose is almost never this shape and would be roundish.

As I mentioned before, Alar reduction involves cutting off flesh from the sides of the nose (where the nose joins the face) and sewing it up again. While this procedure does ensure the nose is narrower and less bulbous, too much of the alar cut off also sacrifices the natural curvature of the alar, causing it to look very straight and stiff.

Alright enough!! I spent so much time looking for the photos and it is 11.16am now and I AM YET TO SLEEP! Crazy or what??

Good night ya all!