Sorry for the long delay in updates, there seems to be nothing really much going on in my life recently unless you count I tio bao in MJ for Benny's spectacular Da San Yuan, in which the red, green and white is all I throw one.

He got 4 tai outside also so bao big card, and I threw the hong zhong coz I got 1 colour and 1 centipede, then tio bao. Then after that I got fa cai and I throw again, bao bai ban. Then I throw the bai ban!! I reckon better I throw than he zi mo, correct?

Back to happier news: Mike is coming to Singapore again!!!!

I am sooooo happy! It's great to have a boyfriend! Now I won't have to fret on Valentine's day coz he will be here!! :D

ALL WELCOME THE CHAMPION! He is now officially called "The Love of My Life"!

I need to break the cursed 1 year benchmark. I'd then officially be one of those girls with long-term stable relationships!!

Speaking of long-term relationships, I was having a nice chat with Qihua that day about why she is soooooo bloody popular with boys.

Zapzap and her are officially the most passionate and dramatic couple I've ever seen; they break up every few weeks or so, and each becomes suicidal and super depressed, then get back together and love each other more than ever (to the glee of me, who will get invited to play endless mj with them), then break up again when things get a tad too stable and boring.

If I ever write a book, the characters will include Qihua, Zapzap and Adrian Mah because they all have very interesting and fascinating characters. (Adrian taking the trophy because it is just impossible that someone can get everyone (including guys) to like him).

Maybe I will put them all in some love triangle with Zapzap liking Adrian and Adrian liking Qihua and Qihua liking Zapzap. There will also be a pet dog who is neurotic and 1 fat chef (comic relief) and a guy with intricate tattoos all over him trying to break out of prison to save his brother who was maligned for murder.

They will then all fly on a plane to escape, when the plane crashes and they all get lost on an island. Black smoke follows the characters and some of them die. The island happens to contain 4 housewives, of which 3 are desperate and the other one is just normal and a pretty good cook.

The non-desperate housewife falls in love with the fat chef and they cook a lot of good food for everyone. The end of the story is that Qihua, Zapzap and Adrian all becomes damn fat (yummy food you see) and the neurotic dog rolls them into the ocean when they are asleep.

They were never found again.

Back to before we were digressed by me, I was talking about how Qihua is so popular with boys.

Everytime she and Zapzap has a break-up a lot of boys will swamp for her and a lot of girls will swamp for Zapzap (allegedly including Le Yao, whom Maia (Lee) called a "china chicken", haha).

I keep getting people ASSUMING that I get chased by boys too, but as I was telling Qihua, that's really far from the truth.

There's just something weird about me, because I hate being hypocritical and fake to a frightening extent.

So you know that sort of situation where some friend of yours likes you, and when you guys go out he gives out hints that he is interested, and it is super awkward if you don't like him back?

I just hate bring put in that situation!

And besides, my expectations for boys are really high (if you are not super cute you better be a minister's son at least), so if I see someone I am not physically attracted to, I immediately try to give off a vibe that I am gross, nonchalant and too loud, so that the boys won't even have a chance to like me and put me in that situation.

Of course, most of the girls around try to be sweet and cute all the time, but I really don't like the consequences of doing that (ie some weird guy liking me).

Afterall, what's in that to lose for flirting around? You get guys showering you with gifts, driving you around, and paying for dates.

I don't know how these girls can stand that sort of awkwardness though. For one I feel bloody bad when boys are nice and I know I won't be with them ever, and second I feel at some point that I am obligated to kiss him or something to return him his kindness towards me...

(As you can see I don't believe in chasing. If I didn't express an interest from the start it probably means I will never be with you no matter whether you tattoo my name all over your ass.)

So, the results of me being like this (all uncouth and gross and mainly, STRONG) is that all the boys treat me as one of the boys, and any talk of them, ie, kissing me, is enough to make them puke (bloody incestuous and wrong).

And they send the vulnerable and even mildly attainable girls home and I am left to take a cab.

Which is kind of mean! because I don't think I am unattractive, just that I chose not to be attractive in front of men I don't like.

Other girls are cute. Wendy? Wendy is ...

I remember Mike being so confused when Kelvin and the rest of the boys acted like I was super undesirable and ugly.

Back when I was with Mike's friends in the states, he told me that almost all of the guys there thought I am hot (obviously I can't act gross in front of his friends because he would also see it).

Race issue aside, I really believe that how a girl acts is the key to how many people like her.

But I have no one to blame but myself for this, of course. I don't even know why I act this way, except I really hate feeling fake (ironic since my nose is plastic). Well, at least I don't get entwined into some bloody love complex.

Woo! As I am writing I suddenly realised Shuyin is like that too, she acts totally different around the boys she is interested in! (which is about a grand total of 2, ever) I just realised both of us do not display our vulnerabilities around men, which is one key to get them to like you - to make them feel like they have to protect you.

Love Shuyin! She is the sort whom, if you bring to meet your crush, won't cause the crush to fall in love with her kind. :D


I don't know what's the point of this rant.

Hmmm, I wonder if I have lost the art of flirting completely? When I was in secondary school I did it so well that I had a new boyfriend like every week (of course then, expectations were a lot lower), even when I was attached.

When I am attached now I behave even more grossly around boys I don't like, because I know I am not a strong-willed person and even less so when I am attracted, so I am not gonna even let temptation in.

Just that day at MoS there was this multi-tattooed guy coming up to me. He said, "Hey there, pretty dress you have!"

I smiled at him and said thank you.

Still wearing the same grin on his face, he continued by saying,

Taken aback, I said, "What? Nooo..." instead of a clever retort.

Throughout the night I got more pissed off as I thought about it, and even contemplated pouring some ice-cold drink onto his skinhead, but my nose bandages just got off so I was quite scared he would punch my nose.

I just can't take it that I let him do that to me! I am plump la, but certainly not pregnant-fat ok!

He was sitting at the next table and kept shooting long steady stares at me, like not even looking away when catching eye-contact. I was like, What's up with this guy man?! He got death wish is it?!

Imagine my trauma when later on this guy appeared in the same house party I was in. -_- Kuakua.

And not only that, he walked over to me, and said the following in exactly the accent you can imagine,

Him, "Hey... peace man..." - complete with the hand action accompanying the slurred words.

"Peace about what?!" I snapped back. True what. What sort of fuck is "Peace man"? Does it constitute to an apology? If you want to make peace, then say sorry properly instead of acting like it is both our faults when I didn't do anything wrong except sit there (perhaps in a pregnant manner).

PEACE LAN JIAO! I hate it when people ask me to chill or relax lor! Only gets me super geared up. And I hate even more when people do this black people speech thing!

I asked him again, Peace about what? and we repeated this cycle ("peace man" "peace about what" "just peace man..." "PEACE ABOUT WHAT?!") a few times including him actually sticking out his knuckled fist for me to hit, supposedly symbolising peace... not.

He got angry at this point, and said, "Oh, so you being cocky now?!" and that got me really pissed off (hate people calling me cocky - and also pregnant) so I shouted and said,

"You calling me cocky when you come up to me and call me fat when I was doing nothing to you?!" or something to that effect, but he already walked to the nearby table and was grumbling to himself about what a bitch I am.

Grrrr! Our mutual friend stepped in at this point and told him off for calling me pregnant (looking back, the insult is really pretty funny), so things ended on a pretty sour note.

That's his way of hitting on girls, to first praise then insult, and it supposedly works!

According to Kelvin, this way the girls seek to get his validation, and get him to praise them again.

It's a really weird method, and maybe the theory works, but you can't time the praise and the insult so close together lar!

Anyway, I am soooo not the sort of girl whom you can pull such tricks on. I am not afraid of making a scene, and I have enough friends and someone I love loving me back, so I don't seek his validation in the least.

But I forgive him. Afterall, his intentions were good (although the peace and chill part is just juvenile. Act hiphop!).

Anyway, have you people been watching Girls Out Loud OR NOT?!!!!

In the next episode you will see my nose job's prelude, and also an embarrassing glimpse of me without make up, which is horrifying to say the least.

All the youtube videos of all the Episodes so far are all here!

Love you guys! Gonna sleep now, and when I wake up, my baby will be here!! I spent $74 on waxing all unsightly hairs and 3 hours cleaning my filthy room. :D

Pic of me, new nose still mosaic-ed. You can only see it after the last episode airs next next Monday! 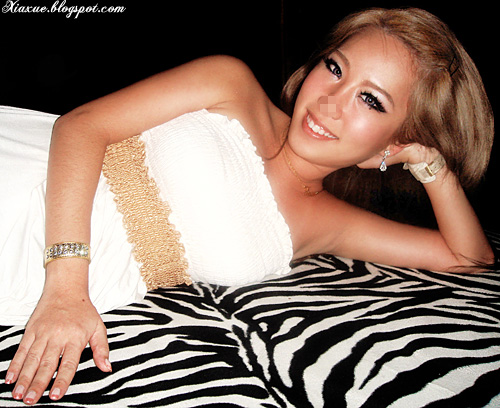 Rozz took this picture!! Look like I have a fabulous tan right? It's just bronzing powder from M.A.C!

I can't believe I started out this blog entry not intending to write anything and wrote so much in the end! I am amazing.
- January 18, 2007
Newer Post Older Post Home