Would you have sex with this guy?

Updated August 2012:
I've made the choice to delete this article because despite it being written 5 years ago, people still keep quoting it to make it seem like I am the utimate monster who somehow advocates rape. Don't be fucking ridiculous.

I may not have been raped before but I've been molested plenty of times. And time and again I have proven my very strong stance on the outrage of a woman's modesty. I always stand up for my fellow women when they are genuinely taken advantage of. Why don't you idiot haters quote these instead?

So you want to know what this article was about?

Well one day I saw this article on the papers. It is about a US marine, Daniel Smith, 21, who got charged with a life sentence for raping a Filipino girl named Nicole. 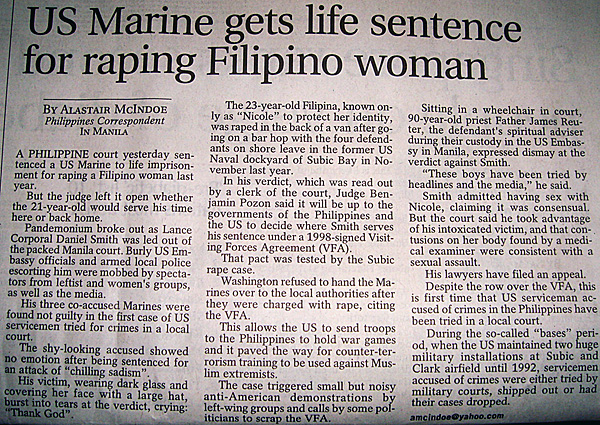 The more I read the story the more fishy it seems to me.

I have explained all my reasons for believing that Nicole was NOT raped HERE in the follow up article I wrote in 2007 but I think people who linked this entry up did not bother to read it.

I believe they STILL won't read it so I still repeat the fishy facts right here again:

* Nicole had another white boyfriend she was in a relationship with, yet...

* Smith invited "Nicole" to Subic area, she agreed, and he paid for her transportation

* After having a good time at the club, Smith, his 3 Marine friends, "Nicole" and a Filipino driver get in a van and head back to the nearby ship

* Once in the van, according to statements made by the Filipino driver and the 3 Marines, Smith and "Nicole" were in the back of the van, their conversations were normal and they were not arguing

* Smith claims consensual sex occurred in the van at the time, that "Nicole" helped him put on a condom and that "Nicole" was lucid enough to consent to sex

* Nicole files rape charges against Smith and 3 other Marines

* The Filipino driver initially claims to the police, no rape occurred

* 2 days later after intense interrogation and possibly being beaten and threatened by the police, the driver signs a statement claiming that rape did occur in the van

* A few days later the driver recants the written statement, is interviewed on national television by no less than the Vice-President of the Philippines and again claims no rape occurred

* Daniel Smith is convicted, 3 other Marines acquitted, the Filipino driver was never charged

Without even being in the courtroom to hear all of the testimony it seems clear that there was an obvious error in logic on the part of the judge. If rape did occur within the small space of the van then it would be impossible for the 3 other Marines and the Filipino driver not to know it was happening, so they must be convicted of complicity. Also, if Nicole was too drunk to give her consent to have sex then how could her identification of Smith be deemed reliable?

Now these were all the facts that were known in 2007. At the point when I wrote my articles, Daniel Smith got convicted and I got attacked like mad (even till this day) for this article I wrote...

UNBELIEVABLY I WAS RIGHT: 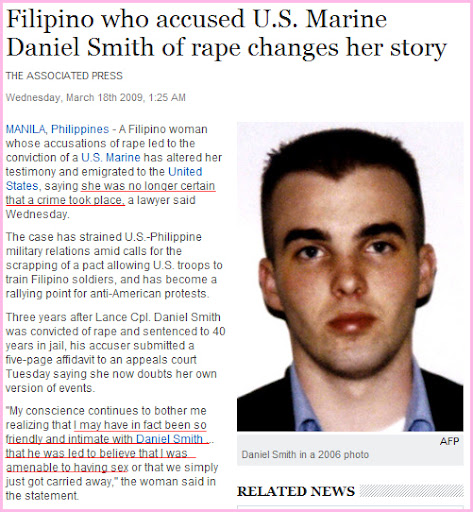 As it turns out, Daniel Smith DID NOT rape Nicole.

She was just a drunken slut, just like I said, abusing the laws protecting women for what? Vengeance? Attention? To placate her guilt for cheating? Who knows? At least she now admits she's a liar.

If it turns out I was right, then why are people so angry with me?

Because I wrote this blog entry with the main point being that Daniel Smith is too handsome to be a believable rapist.

Here's a better picture
On hindsight I can see how that can make people gasp in shock but I WAS KIDDING. It probably wasn't a good thing to make light of, rape being a serious topic and all. I mean I do believe that handsome people, in general, are less likely to have to resort to rape. AND YES I am not an idiot I do know that rape isn't about sex it's about the dominance and Ted Bundy was handsome but CHILL THE FUCK OUT OK? All these psychology about rapists aren't relevant because Daniel Smith didn't just jump out of the bushes to rape and mutilate Nicole. He wine and dined her and paid for her shit then tried to have sex with her after a few days like a normal dude. Besides the fact that he is good looking, all other signs point to the fact that he DID NOT rape her.

People were also angry coz I said Nicole appears to be a slut (and therefore deserves rapes).

I would like to clarify that I never once said she deserves rape. NOBODY DESERVES RAPE, except maybe paedophiles.

But I was right about her being a complete whore. Now that the truth is out, I don't even have to mince my words anymore.

Now tell me... DO YOU BELIEVE A GIRL LIKE THAT WAS RAPED?

Sorry, I don't. Even if she changed her mind at the very last minute before penetration and decided not to have sex anymore, I'm sorry if I have zero sympathy for her plight. All her actions led to Smith believing that she wanted to go all the way and I don't blame him for thinking so.

What is even worse, she abused the very laws that are used to protect women, the REAL victims of rape, to ruin Smith's life for her wanton actions. She is insulting the plight of the real victims.

Just thinking about this makes me SO ANGRY. In the two years that Smith was in jail probably getting his rectum cleaned out by fellow inmates, he could have done so much with his life but all he got was being branded a rapist internationally by a fucking LIAR.


Seriously, Nicole is such a CUNT!!

Yes there are laws protecting women because we are vulnerable and we are the weaker sex. But just because a fellow woman yells "rape!" doesn't mean she isn't abusing the law somehow for her own benefit. We still have to look at the facts and make a rational decision. We cannot just immediately jump to her aid and be on her side... The law has to be fair to the alleged rapist and hear his story too.

I cannot believe that in this situation Nicole is such a HORRIBLE human being and people are still siding her just because she was allegedly raped. Ridiculous! Think about the consequences of her actions and how it will affects laws and make it harder for us to convict real rapists from now on!

So yes just to make it EXTRA FUCKING CLEAR for the morons still linking this article.

NO, I do not think rape is ok just because it is done by a handsome guy. I just think if a handsome guy is accused of rape I am less likely to believe he really did it and in this case it turns out I was motherfucking Phoenix Wright wasn't I so that should shut your mouths.

Two men got burnt by a dragon. One got burnt just by walking past the dragon. The other got burnt because the dragon was sleeping and he kept poking the dragon in the eye with a stick. WHO DO YOU PITY MORE??

But if you in drunken stupor dirty dance with a dude and rub your groin against his then he is gonna think you want to have sex with him. And when you resist, he might not believe you genuinely don't want sex. Well, lesson learnt - next time protect yourself!

If you still wish to hate on me and call me a monster blah blah even after my clarifications, then I have nothing to say. Actually I think I deserve some acclamations for being more astute than any lawyer was back in 2007.

And I so courageously and rightfully stood up for Daniel Smith back when nobody else dared to because it was the politically incorrect thing to do. I withstood so much for standing by my opinions. My TV show didn't go on its second season because people kept calling up the tv station to quote this article. Wow, my own bravery and resilience is making me shed a tear really. :')

Ending this entry with another photo of Daniel McHandsome, victim of an attention seeking whore and the laws protecting females. 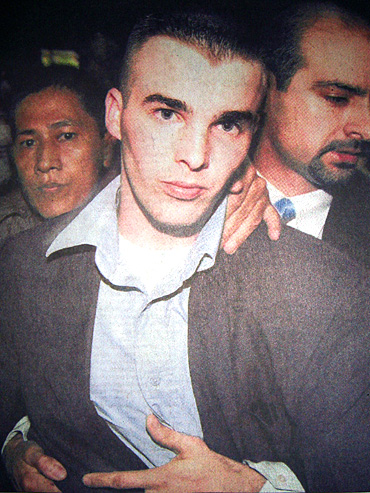 Three cheers for standing up for your opinions and never backing down no matter what, Daniel Smith. And me.... And me.
- January 09, 2007
Newer Post Older Post Home